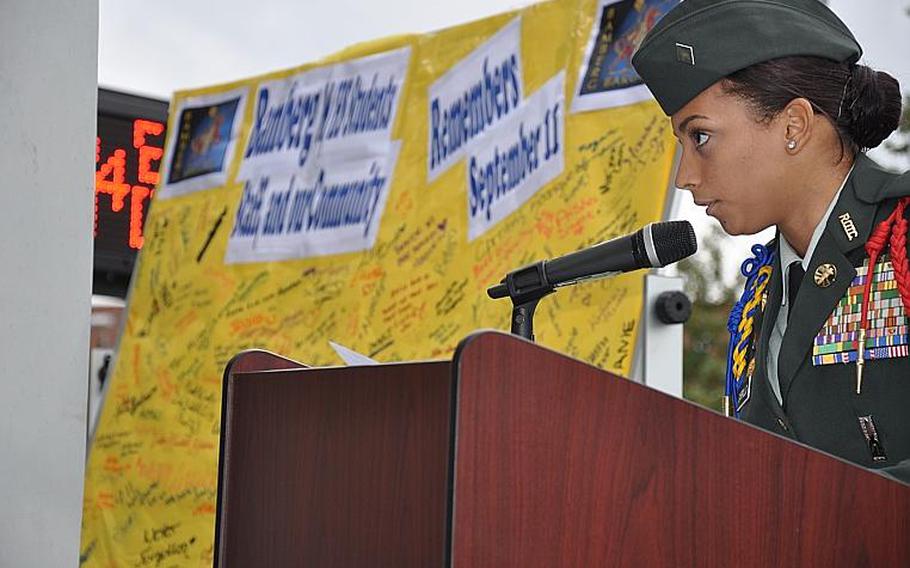 Cadet Maj. Rosaliz Carrillo, a senior gives a speech to her fellow students at the Bamberg Middle/High School Friday during a 9-11 remembrance ceremony. ()

Cadet Maj. Rosaliz Carrillo, a senior gives a speech to her fellow students at the Bamberg Middle/High School Friday during a 9-11 remembrance ceremony. () 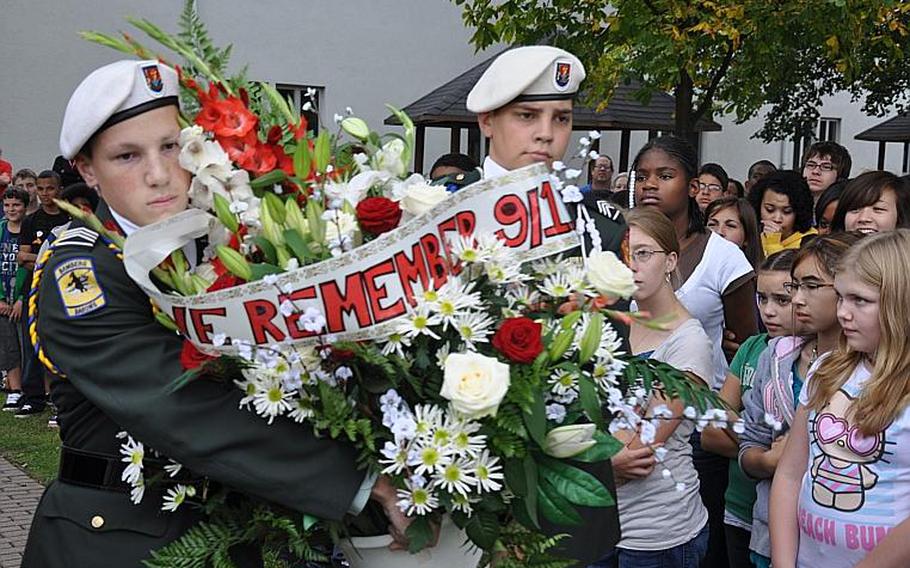 Cadets Nicholas Zurcher, a junior, and Daniel Riojas, a senior, carry a bouquet of flowers at the Bamberg Middle/High School Friday during a 9-11 remembrance ceremony. () 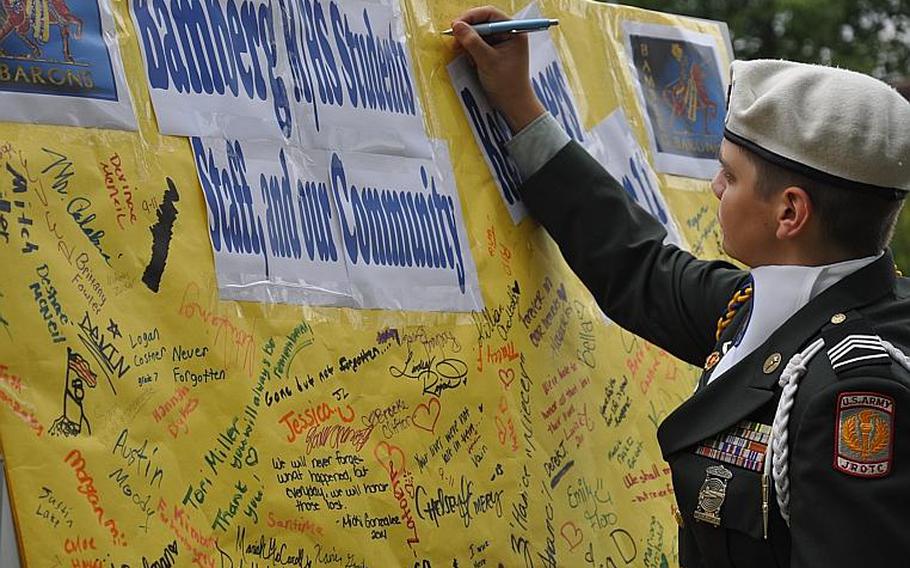 Cadet Staff Sgt. Daniel Riojas, a senior at Bamberg Middle/High Schoo, leaves a remembrance message prior to a 9-11 ceremony Friday at the school. () 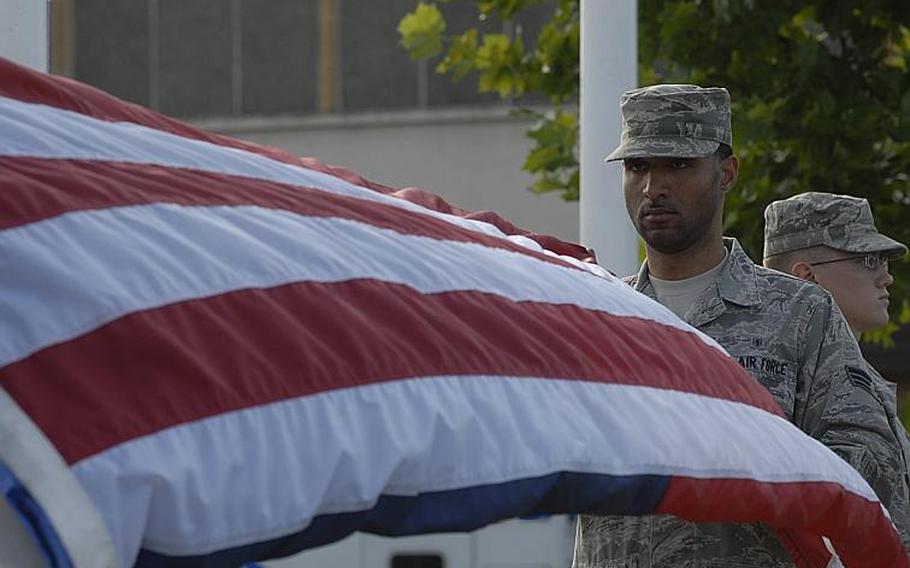 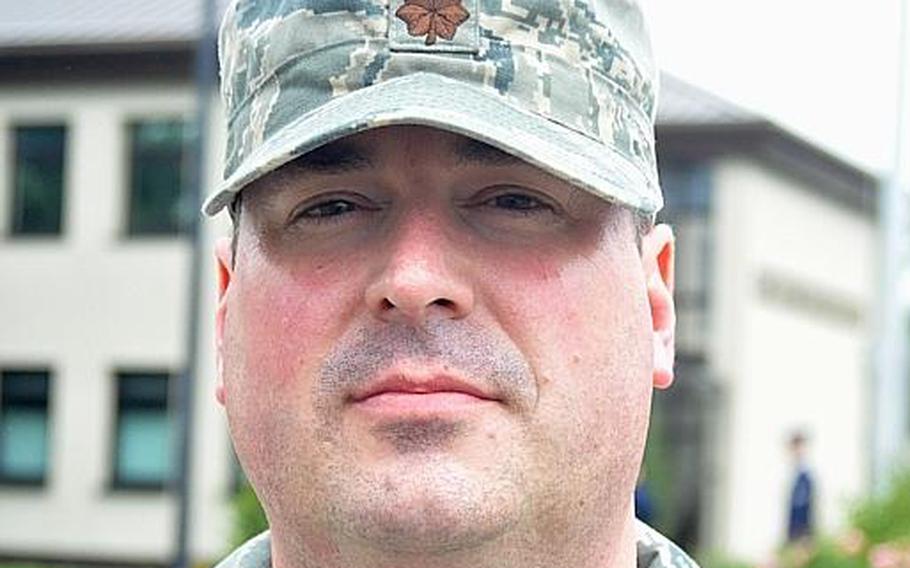 Buy Photo
Air Force Maj. Jeffery Bridges, an intelligence officer in the 17th Air Force, was in the Pentagon when American Airlines Flight 77 struck 10 years ago on Sept. 11. He took part in a ceremony at Ramstein Air Base Friday, which commemorated the 10th anniversary of 9/11. (Seth Robbins/Stars and Stripes) 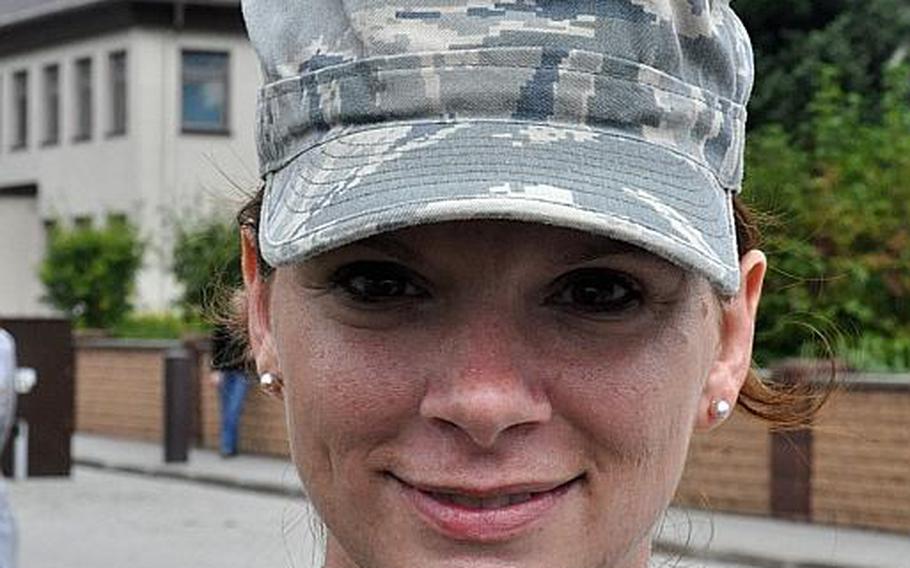 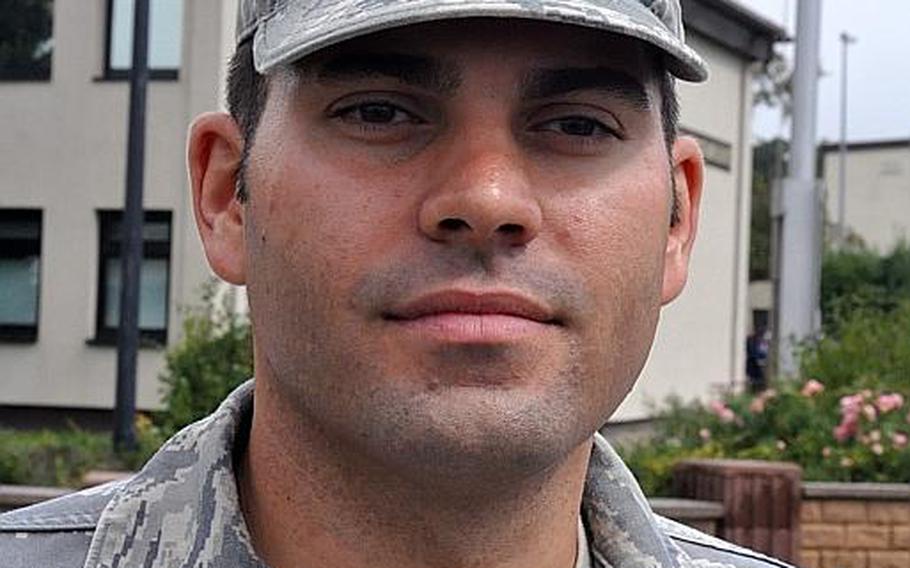 Buy Photo
Air Force Master Sgt. Carlos Pubillones, of USAFE headquarters, said he watched 10 years ago from his home in Queens, N.Y., as smoke billowed from the World Trade Center towers. Pubillones took part in a ceremony at Ramstein Air Base Friday, which commemorated the 10th anniversary of the 9/11 attacks. (Seth Robbins/Stars and Stripes) 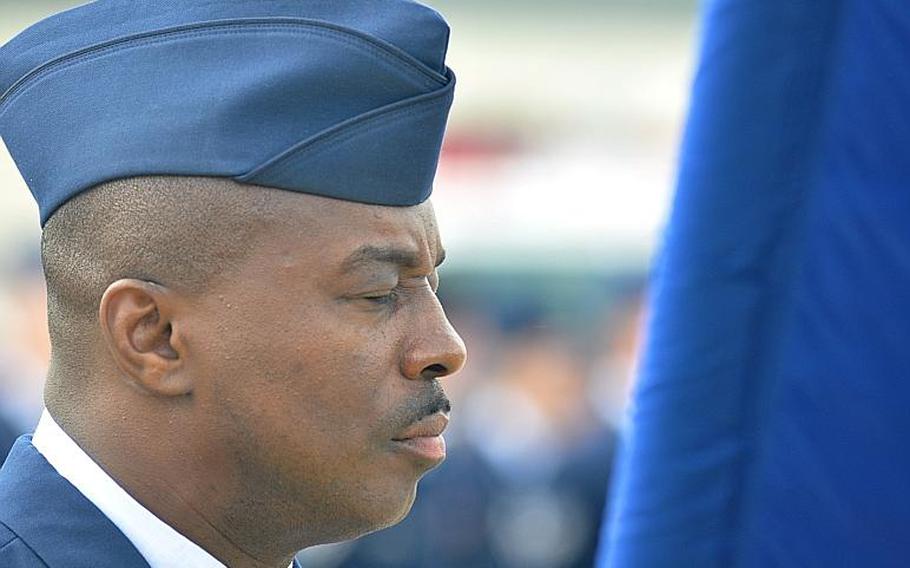 Buy Photo
Chief Master Sgt. Zef Smith, command chief of the 86th Airlift Wing, shuts his eyes during a prayer. The prayer was part of a ceremony, held at Ramstein Air Base Friday, which commemorated the10th anniversary of the attacks on Sept. 11. (Seth Robbins/Stars and Stripes) 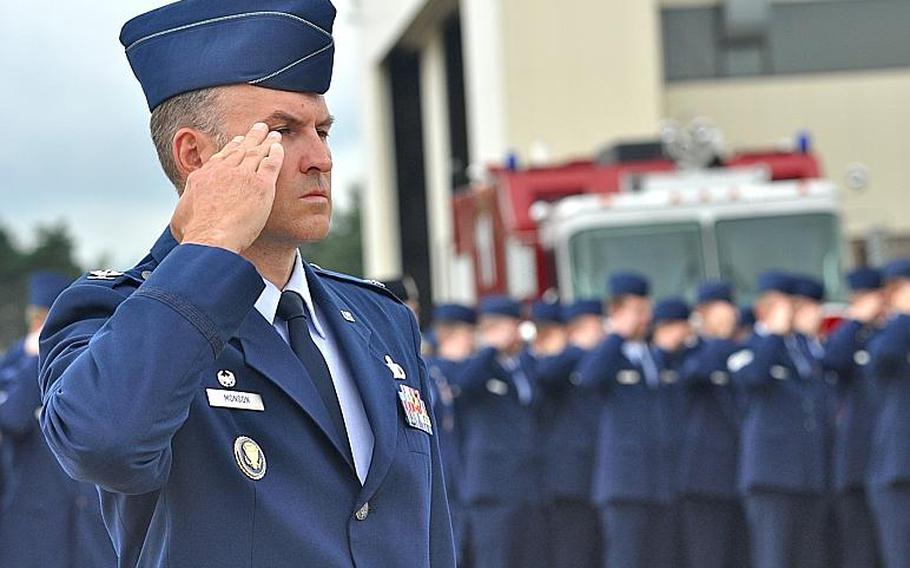 Buy Photo
Col. Michael Monson, commander of the 86th Mission Support Squadron, salutes during the playing of the "Star-Spangled Banner" at a ceremony Friday at Ramstein Air Base commemorating the 10th anniversary of the attacks on Sept. 11. (Seth Robbins/Stars and Stripes) 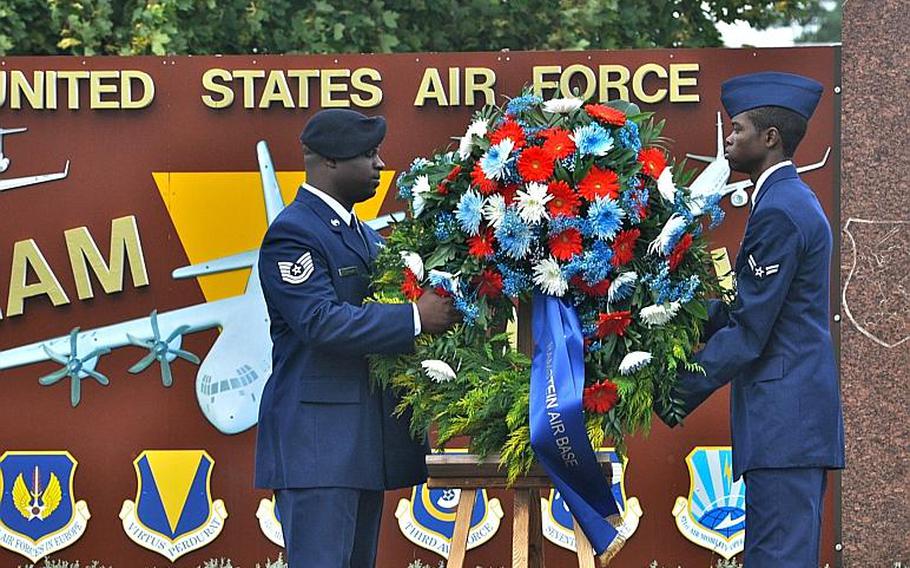 Buy Photo
Two airmen remove a wreath from its pedestal during a ceremony Friday at Ramstein Air Base. The wreath, part of a ceremony commemorating 9/11, was placed at the foot of the flagpole, alongside another wreath that was brought by German officials. (Seth Robbins/Stars and Stripes)

Pubillones, of Queens, N.Y., was home on leave with his brother, Jose, an Army sergeant. The brothers&rsquo; homecoming stopped their mother, Maria-Elena Garcia, from going to her physical therapy appointment that day. The appointment, scheduled for 9 a.m., was inside the World Trade Center.

On Friday, Pubillones and his wife, Air Force Tech Sgt. Monica Pubillones, joined other airmen and civilians at Ramstein Air Base in Germany to commemorate the 10th anniversary of the attacks on 9/11. For Monica Pubillones, the day was also a time to reflect on fellow servicemebers who were killed in the wars in Iraq and Afghanistan.

Military installations throughout Europe held ceremonies Friday marking the anniversary or had them scheduled throughout the weekend.

In Bamberg, at the Middle/High School, about 100 students gathered on the front lawn for a commemoration ceremony.

Beverly Joiner, the deputy to the Bamberg garrison commander, asked how many of the pupils remembered 9/11. About a quarter of the students&rsquo; hands went up, including Luis Rivera&rsquo;s.

Rivera was in the first grade in 2001. His mother picked him up early from his school in Ft. Hood, Texas.

&ldquo;I didn&rsquo;t really understand what was going on,&rdquo; said Rivera, remembering his mother&rsquo;s reaction as he entered the car. &ldquo;She was worried, that is all I could sense.&rdquo;

In Grafenw&ouml;hr, Garrison leaders marked the anniversary by laying a pair of wreaths at the flagpole.

At the adjacent training area, European Command leaders will hold a memorial ceremony Sunday. Soldiers from 18 of the 21 North American and European nations who lost citizens in the attacks are expected to participate.

In nearby Vilseck, the 2nd Stryker Cavarly Regiment planned to commemorate the attacks Sunday by transferring a steel girder from the former World Trade Center to a unit of the German Bundeswehr, the Panzergrenadierbattalion 122.

At Ramstein&rsquo;s ceremony, a bell rang out at the time when the first plane struck the World Trade Center&rsquo;s north tower. It was then rung nine more times.

Brig. Gen. Charles K. Hyde, the wing&rsquo;s new commander, said 10 years does not provide enough distance to comprehend the devastation of the Sept. 11 attacks and their aftermath.

&ldquo;Maybe in another 10 or 20 years, we will see 9/11 with more clarity,&rdquo; he said. &ldquo;But for now, it&rsquo;s probably sufficient to pause and think about where you were 10 years ago.&rdquo;

Air Force Maj. Jeffery Bridges was inside the Pentagon, listening to a briefing. Bridges, whose personal remembrance was featured in Stars and Stripes, said the office was on the fifth floor, just two corridors away from where American Airlines Flight 77 struck.

&ldquo;I could hear and feel the explosion,&rdquo; he said of the Boeing 757&rsquo;s impact

Bridges still keeps a Pentagon map, found in his pocket hours after he ran from the building. The black and white paper is kept safe within a plastic sheath.

&ldquo;I can still see where the plane hit and then where I was located,&rdquo; he said. &ldquo;It helps me put things in perspective.&rdquo;