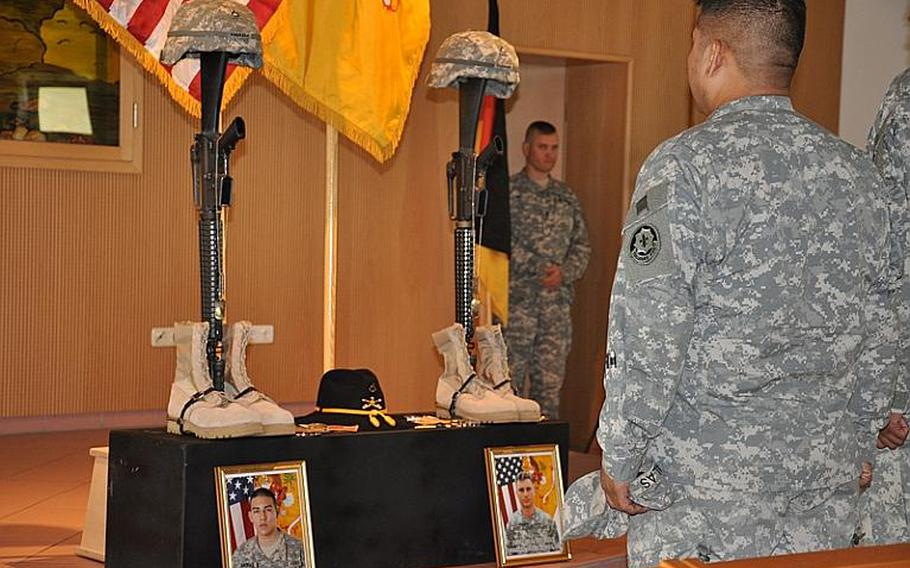 Soldiers pay their respects following a memorial service at the Vilseck base chapel for Pfc. John E. Andrade, 19, of San Antonio, and Pfc. Paul O. Cuzzupe II, 23, of Plant City, Fla., who were killed in Afghanistan in two separate bomb attacks on Aug. 7 and 8, respectively. Both soldiers were assigned to the 2nd Stryker Cavalry Regiment based in Vilseck, Germany. (Dan Blottenberger/Stars and Stripes)

During the ceremony, they were remembered as dedicated soldiers and family men.

Andrade joined the Army in August 2009, 10 days after marrying his wife, Elizabeth, in order to support his new family.

&ldquo;He loved his family &ndash; that is all he talked about,&rdquo; his friend, Pfc. Travis Lay, said. &ldquo;His wife had recently had their baby, and that was all he ever talked about was his little boy &ndash; John Jr.

&ldquo;His wife and his son were his world,&rdquo; Lay said.

During a letter reading during the ceremony, Andrade&rsquo;s commander in Afghanistan said his unit was sharing in the family&rsquo;s grief.

&ldquo;To John&rsquo;s family ... we share your grief, and you will always be in our thoughts and prayers,&rdquo; Capt. Shawn Herrick, commander of Company I, 3rd Squadron, 2nd SCR said in the letter.

Andrade was a Stryker driver, according to the biography provided by the Army.

Cuzzupe was remembered as an exceptional medic. Since deploying in June, he had proved his passion for the job on the battlefield, according to his commander, Capt. Mark Ross.

He was one of the first to provide assistance to Afghan civilians who were injured by a bomb near the unit&rsquo;s forward operating base. His quick actions resulted in the lives of civilians being saved, Ross said in his letter that was read during the ceremony.

Almost a week after the bombing near the base, Cuzzupe helped a 12-year-old Afghan boy who had stepped on a pressure plate bomb, but the boy could not be saved, despite his efforts, Ross said.

&ldquo;You would not hear of him letting anyone down or not coming through when he said he would,&rdquo; wrote a fellow medic. &ldquo;You could count on him in the toughest and most unpleasant situations.&rdquo;