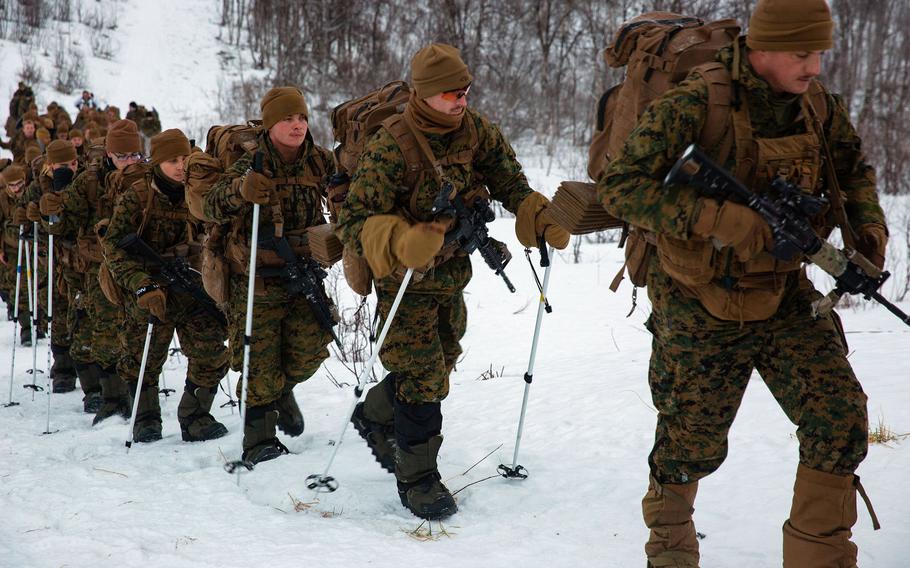 Marines with Marine Rotational Force Europe 21.1 participate in avalanche search and rescue drills in Setermoen, Norway, Feb. 1, 2021. Marines who had traveled to Norway for exercises that were canceled soon after their arrival last month will remain there for training, the service said Feb. 18, 2021. (Jesse K. Carter-Powell/U.S. Marine Corps)

About 1,000 U.S. Marines left in limbo in Norway after Arctic drills were canceled because of coronavirus concerns will now be staying on until spring, the Corps said Thursday.

“The Marines will carry out their field training in accordance with Norwegian and U.S. COVID safety protocols,” Maj. Adrian J.T. Rankine-Galloway, Marine Corps Forces Europe and Africa spokesman, said in a statement.

The Marines had traveled to Norway last month for the long-planned Joint Viking and Reindeer I exercises, only to see them canceled soon after arrival when case levels spiked in the country.

The number of new daily cases throughout the country dropped from highs of about 900 per day in early January to about 250 per day as of mid-February, Norway’s public health agency reported Thursday.

The Marines say they will now press ahead with their Arctic mission.

The pandemic has complicated military training efforts in Europe for nearly a year. Numerous exercises have been canceled or curtailed, including the Marine-led Cold Response exercise in Norway last year.

The Camp Lejeune, N.C.-based Marines are part of a rotational force that trains with the Norwegian military and other NATO allies.

The Marines have been a regular presence in Norway since the Cold War and continue to keep large stockpiles of weapons in Norwegian caves.

The mission expanded three years ago when the Corps launched six-month rotations that kept Marines in Norway all year, with back-to-back rotations.

In October, the Marines ended the continuous rotations, opting instead for a periodic training regimen. The shift would enable shorter but larger troop rotations, the Marines said at the time.