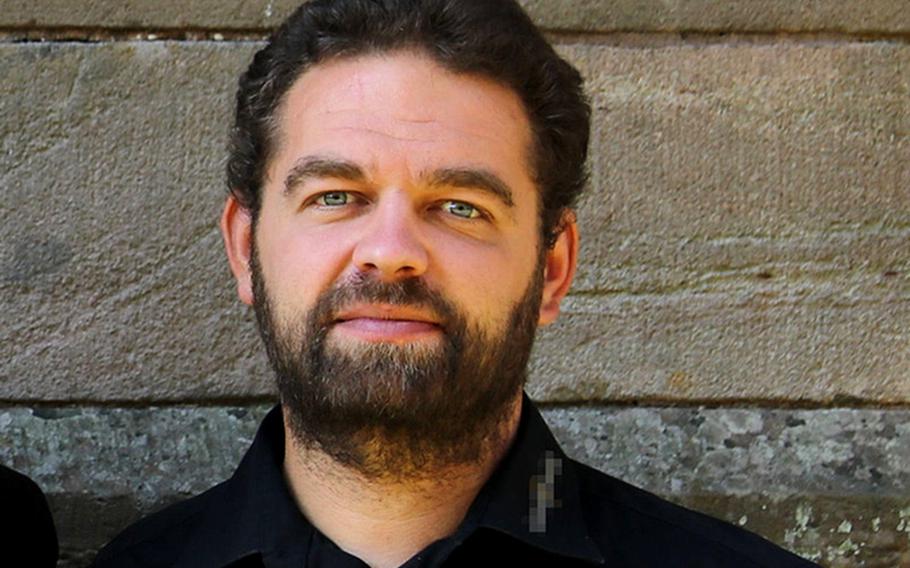 Daniel Mentel, 38, shown here in a September 2020 photo released by police, is suspected of killing his mother and another person March 9, 2021, in Weilerbach, a village near Ramstein Air Base, Germany. (RHEINLAND-PFALZ POLICE)

KAISERSLAUTERN, Germany — A German man who prosecutors say killed his mother and her partner turned himself into police Thursday, ending a long search for him in the villages nearby Ramstein Air Base.

Daniel Mentel, 38, is accused of killing his mother, 60, and a man, 65, whose bodies were found Tuesday around noon in a building where they all lived together in Weilerbach, the Kaiserslautern district prosecutor’s office said in a statement Thursday.

Mentel turned himself in at a Kaiserslautern police station at 1:55 p.m., the statement said, ending a search that began Tuesday in an area that is home to many U.S. military personnel and their families.

Prosecutors have accused Mentel of killing his mother and her partner either Monday or on Tuesday morning.

Police showed up at the Weilerbach residence Tuesday after getting a worried call from the mother’s workplace.

Mentel opened the door to the police and said that his mother had left, prosecutors said. He fled before police discovered the bodies, the statement said.

The accused appeared before a Kaiserslautern District Court judge and exercised his right to remain silent before being returned to jail, prosecutors said. The court upheld a warrant issued Wednesday related to the killings and Mentel’s escape.

An investigation is ongoing, and motive remains unclear, prosecutors said.

Mentel is also being accused of arson for setting fire to a carport and a barn in Mackenbach on Sunday around 10 p.m., and hours later setting a garage in Erzenhausen on fire, the prosecutor’s statement said.

Men who had business ties to Mentel lived in the apartment buildings connected to the burned properties, the statement said.

A window and construction business, Fensterbau Mentel, is registered to the address where Mentel lived with his mother and her partner.

On Thursday morning, search efforts were focused on the villages of Katzweiler, Sambach, Hirschhorn and Rodenbach, Kaiserslautern police said on Twitter.

Police had shifted their search Wednesday night to Sambach, a small area between Otterbach and Katzweiler. Helicopters circled the area for days while police dogs assisted officers on the ground.

Many calls from people who believed they had seen Mentel led police to narrow the search area, Kaiserslautern department spokeswoman Christiane Lautenschlaeger said.

Police had warned residents not to pick up hitchhikers or approach the suspect if they saw him.

“He could seek support and therefore address people,” a Kaiserslautern police statement said. “Please do not try to speak to him yourself.”

Preliminary autopsy results found “that the death of the two victims was caused by violence — but not by gunshot wounds,” Rheinland-Pfalz police said in a statement Wednesday.

Kaiserslautern police released a September 2020 photo of Mentel to aid in the search Thursday. The photo shows Mentel with a beard, unlike an earlier released photo.

Police had described Mentel as about 5 feet, 7 inches tall, with short curly hair. He had last been seen wearing green work pants, a dark softshell jacket and black work shoes.