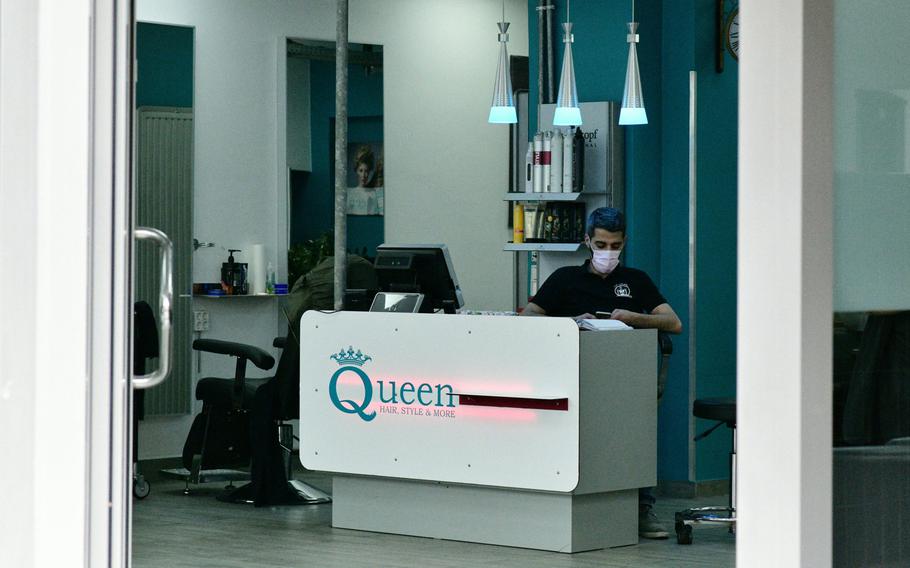 Buy Photo
An employee of a hairdressing salon in Kaiserslautern, Germany, wears a face mask as he waits for customers in March 2020. Hairdressing salons will be allowed to remain open when new restrictions aimed at stemming the spread of the coronavirus in Kaiserslautern take effect on October 28, 2020, city officials said. (Karin Zeitvogel/Stars and Stripes)

Buy Photo
An employee of a hairdressing salon in Kaiserslautern, Germany, wears a face mask as he waits for customers in March 2020. Hairdressing salons will be allowed to remain open when new restrictions aimed at stemming the spread of the coronavirus in Kaiserslautern take effect on October 28, 2020, city officials said. (Karin Zeitvogel/Stars and Stripes) 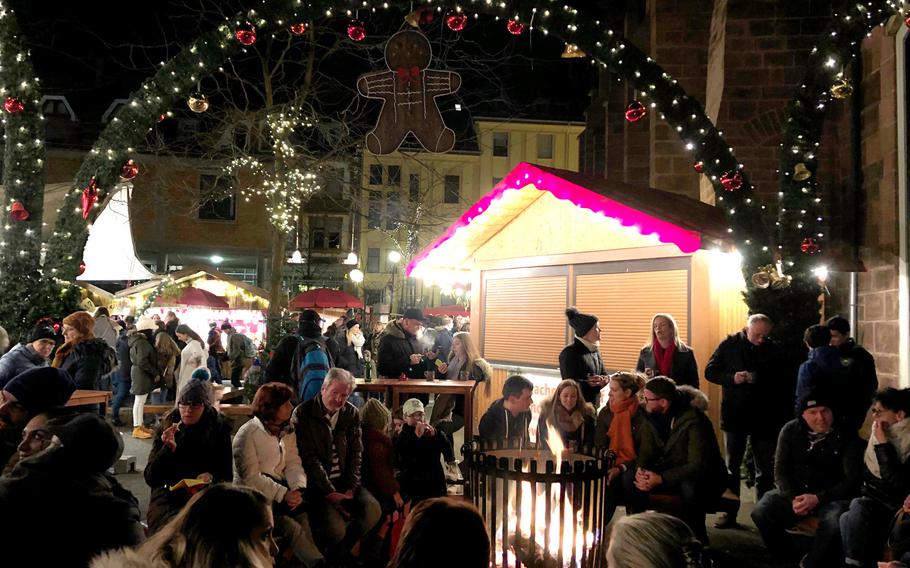 Buy Photo
A crowd sits around an open fire near the Stiftskirche in Kaiserslautern, Germany, during the 2019 Christmas market. City officials may cancel the 2020 Christmas market if the number of coronavirus cases in the area does not come down, they said Oct. 26. (Heather Benit/Stars and Stripes) 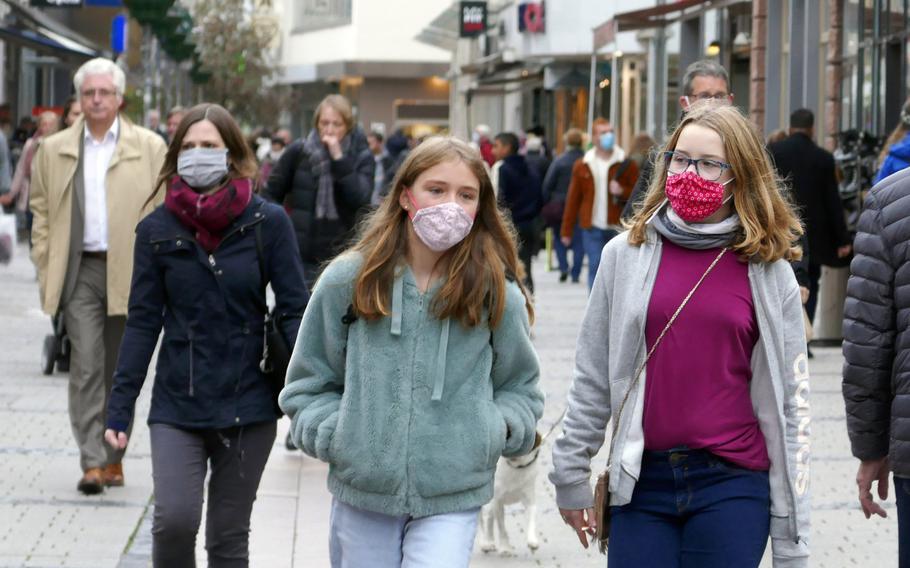 Some people wear face masks as they walk through the pedestrian zone in downtown Kaiserslautern, Germany, in mid-October 2020. (MICHAEL ABRAMS/STARS AND STRIPES)

KAISERSLAUTERN, Germany — Kaiserslautern will require masks outdoors in its pedestrian zone and ban overnight alcohol sales, as the city that hosts thousands of U.S. troops steps up measures to curb the rapid spread of the coronavirus, officials said.

The city convened its coronavirus task force for the first time since the pandemic started after its weekly infection rate climbed last weekend from well under 50 new cases per 100,000 to 83 per 100,000 as of Monday, it said in a statement posted on its website.

The task force, which includes officials from the city and the regional health authority, called for mandatory masks in Kaiserslautern’s pedestrian area, including the old town, starting Wednesday, alcohol sales to be banned from 11 p.m. to 6 a.m., and gatherings to be limited to try to stop the spread of the virus, the statement said.

“The situation is very serious; we have no time to lose,” Kaiserslautern Mayor Klaus Weichel said in the statement, calling on everyone to “do their part to contain the infection.”

At the same time, Chancellor Angela Merkel was mulling a short-term national lockdown as the virus continued to spread across Germany, several news outlets reported, citing the German tabloid Bild. No details were available on the German government’s website.

Kaiserslautern’s task force also recommended that students in all but primary and special education schools wear face coverings until Nov. 8; that flea markets and fairs be canceled; and that the number of people allowed at indoor and outdoor events, including amateur sports, and who can dine together in restaurants be restricted, the statement said.

Brothels were the only line of business that would be shuttered under the new rules, but they may apply for a waiver to stay open, Matthias Thomas, a spokesman for Weichel, told Stars and Stripes. Brothels are off-limits to service members under the Uniform Code of Military Justice.

The anti-coronavirus measures were expected to take effect Wednesday, Thomas said. Most would remain in effect for four weeks.

Those caught violating the new rules could be fined at least 50 euros, Thomas said.

Weichel and other officials regularly discuss coronavirus measures with U.S. military authorities in the area, which is home to Ramstein Air Base and numerous Army bases. Kaiserslautern district, which surrounds the city, was raised Monday to the “red” health alert status by Germany’s public health agency, the Robert Koch Institute, after cases exceeded 50 per 100,000 inhabitants over seven days.

The military often imposes stricter measures on service members than those required by Germany.

Ramstein has required since April that face coverings be worn “in public places or when individuals cannot maintain physical distancing on base, and face coverings have been required in base schools throughout this academic school year,” officials from the 86th Airlift Wing said in a statement sent to Stars and Stripes.

“We remain committed to maintaining our strong partnership with the local community and fighting this virus together,” the statement said.

U.S. Army Garrison Rheinland-Pfalz has postponed its holiday bazaar, which was due to be held Nov. 6-10, “to mitigate risk during this time of increased COVID cases in the area and in line with our Host Nation partner’s guidance on events,” it announced on Facebook Tuesday.

Kaiserslautern officials will decide in the coming days if the city’s popular Christmas market will go ahead, Weichel said. If the numbers continue to rise or remain at their current level, the market will be canceled, he said.

Nuremberg in Bavaria has already canceled its Christmas market, which is one of the best-known in the country, Euronews reported. Mayor Marcus Koenig said allowing the market to go ahead as coronavirus cases rise would send the wrong message.

The Bavaria-based 7th Army Training Command last week barred its soldiers from traveling to districts considered at high risk for the virus and limited most other travel to day trips within Germany. Rules on face masks and social distancing that were announced in the early weeks of the pandemic remained in place, the command said.

The decision to require masks in Kaiserslautern’s pedestrian zone was taken after officials noted repeated violations of social distancing and other measures there, Weichel said in the city’s statement.

Mandating that face masks be worn in high schools and adult education institutions for the next two weeks was intended to prevent transmission by someone who may have brought the virus back from their fall vacation, he said. But because there were few reports of coronavirus hygiene rules being violated at cultural events and in retail outlets, no additional restrictions would be imposed in those settings, Weichel said.

“I ask all shop owners and event organizers to do what’s necessary to ensure that it stays that way,” he said.

Hair salons and barbers, which were shut down for months in the spring, will also remain open, Thomas said.

The virus was spreading “more rapidly than in the spring,” Merkel said in a video posted on the German government’s website.

Fighting it was “everyone’s responsibility,” said Weichel, adding that “the majority should not have to suffer because of the misconduct of a few.”