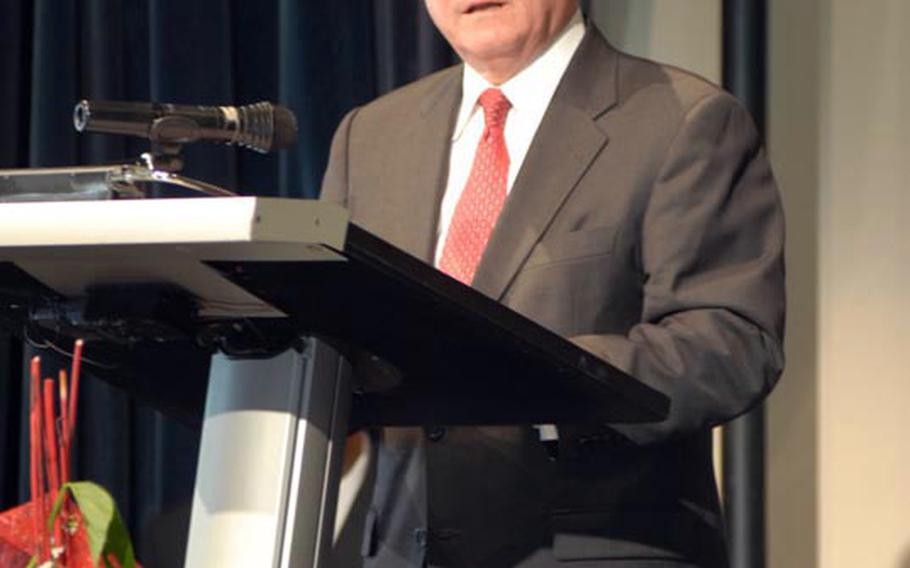 Defense Secretary Robert Gates speaks to a crowd of 124 graduates of Kaiserslautern High School at their graduation ceremony held in the German city&#39;s Fruchthalle building, June 11. ()

Defense Secretary Robert Gates speaks to a crowd of 124 graduates of Kaiserslautern High School at their graduation ceremony held in the German city&#39;s Fruchthalle building, June 11. () 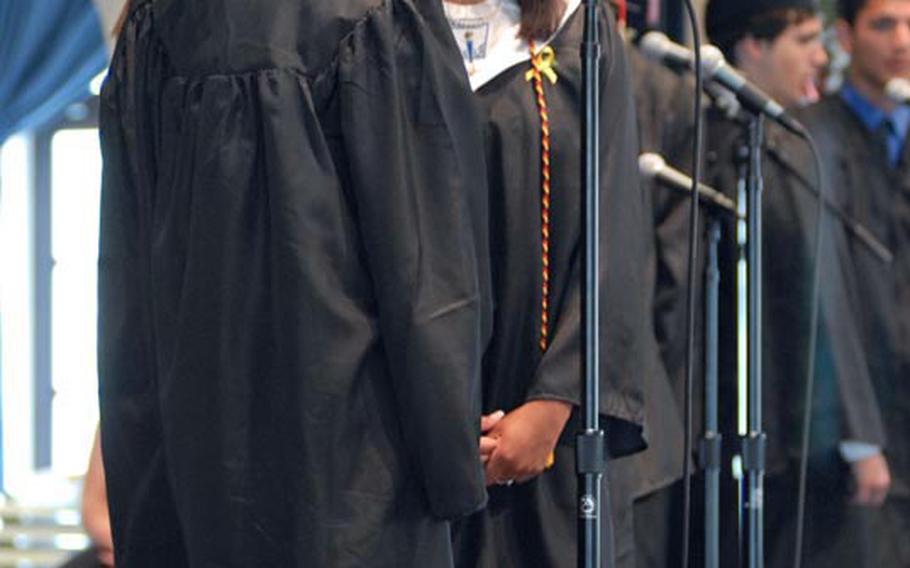 A group of Kaiserslautern High School seniors sing one last time together at the school&#39;s graduation ceremony at the German city&#39;s Fruchthalle building, June 11. () 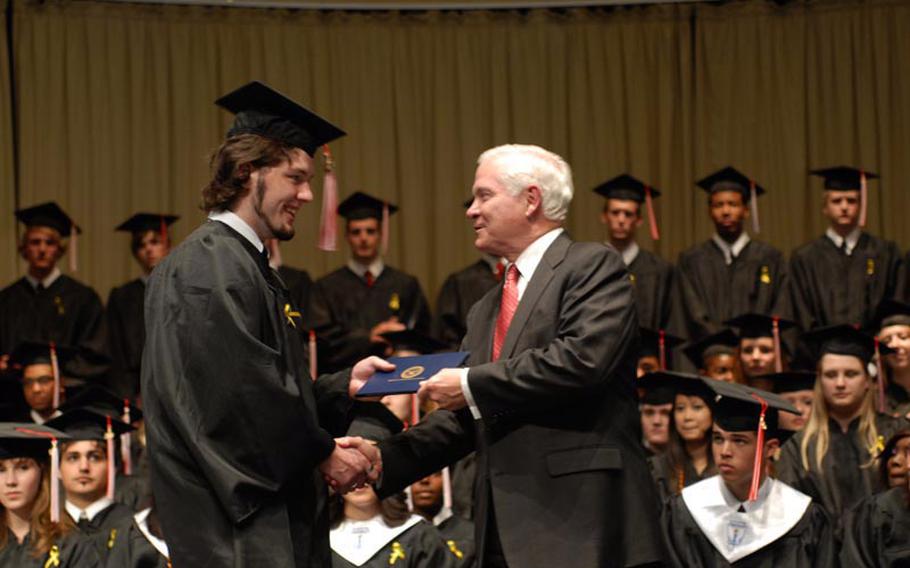 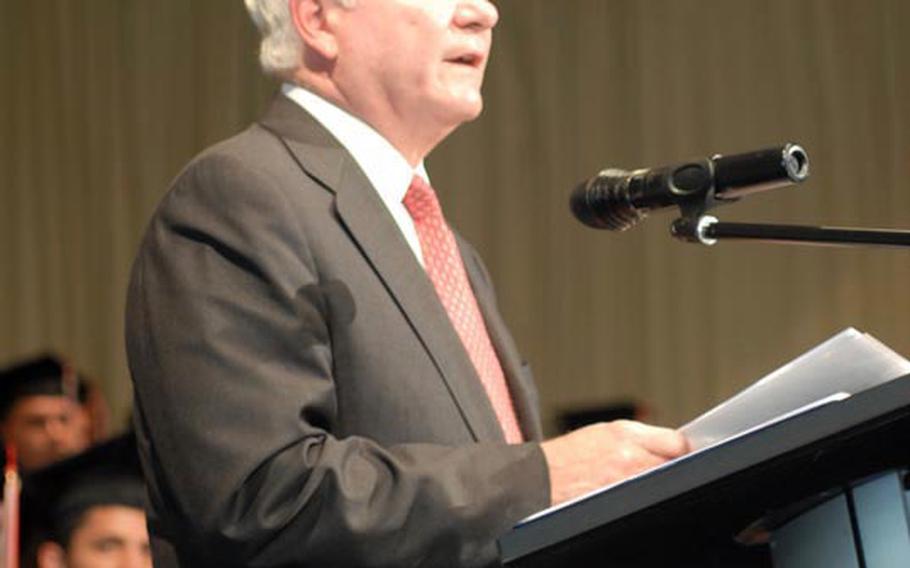 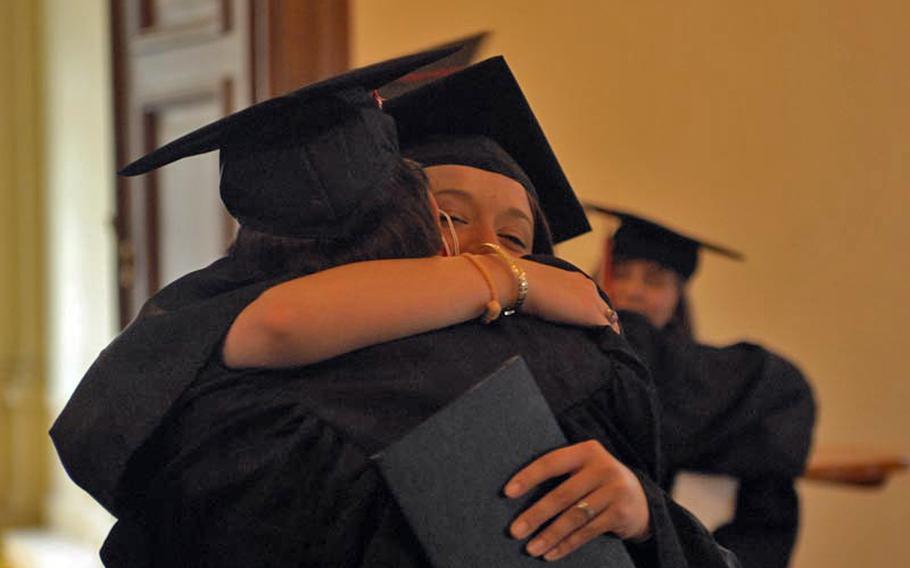 KAISERSLAUTERN, Germany &mdash; From the wave of the security wand to get up the stairs to the men in suits with wires in their ears, it was no ordinary graduation for Kaiserslautern High School&rsquo;s seniors Friday.

It was a night both graduates and their parents will likely remember for a long time because of one special guest.

Defense Secretary Robert Gates delivered the commencement address and individually handed out 124 diplomas, spending two hours with the Class of 2010 and hundreds of beaming family members.

Each graduate had their photo snapped with the white-haired secretary, and all received a military coin from Gates.

&ldquo;It was amazing,&rdquo; said a teary-eyed Janice Cunningham, after tossing her black cap in the air. &ldquo;I was so honored that he would actually come.&rdquo;

To the surprise of an entire school, Gates accepted an invitation sent last fall from the class to be their commencement speaker, dropping in Friday after a 10-day overseas trip to five nations.

It was a rare gesture. Gates delivered the commencement address at his high school alma mater in Kansas a year ago, but this was only the second one since he took office, said Pentagon press secretary Geoff Morrell.

With Kaiserslautern being a large military community &ldquo;far from home,&rdquo; this was a chance for Gates to show his respect and appreciation for troops&rsquo; service and &ldquo;the accomplishments of their kids,&rdquo; Morrell said.

Showing no signs of exhaustion, Gates delivered a long, eloquent speech peppered with humor, stories of his own school days, and words of inspiration.

He shared that during his first year at the College of William & Mary, he received a &ldquo;D&rdquo; in calculus. It taught him two things. First, &ldquo;even if you&rsquo;re fairly smart, you will not succeed if you don&rsquo;t work hard.&rdquo; And, &ldquo;I am standing proof that you can survive a &lsquo;D&rsquo; as a freshman and still go on to make something of yourself.&rdquo;

He encouraged the graduating seniors to be leaders with integrity, common decency and courage &mdash; &ldquo;the courage to do what is right and not just what is popular.&rdquo;

&ldquo;The time likely will come someday when you see something going on that you know is wrong,&rdquo; he said. &ldquo;You may be called to stand alone and say, &lsquo;I disagree with all of you.&rsquo;&thinsp;&rdquo; That is never easy, he said.

He also said, &ldquo;American democracy is not just about our rights, it&rsquo;s also about our responsibilities and obligations. It is the goodness and opportunity of America that made all things possible for me, that made possible my journey to the corridors of power in Washington and around the world.

&ldquo;It has been my privilege, and the honor of my life, to give something back in service. And so for all of you, tonight, with this graduation, the door to opportunity opens for you to serve and to lead.&rdquo;

Military parents were impressed by seeing Gates in person.

&ldquo;It was really an honor for me as a parent to experience that with my daughter,&rdquo; said Army Sgt. 1st Class Terrence Bobbs, father of graduate Marche&rsquo; Bobbs.

&ldquo;He seemed approachable, down to earth,&rdquo; Terrence Bobbs said. &ldquo;To be honest with you, I expected him to be dry.&rdquo;

Cunningham, who shares class valedictorian honors with Ashley Kimberlin, said she too thought Gates &ldquo;was really funny. I think I can actually use his example of getting a &lsquo;D&rsquo; in college.&rdquo; If it happens to her, she said, she knows not to get discouraged.

Ninety percent of Kaiserslautern&rsquo;s graduates are headed to college, Gates said in his remarks. More than a dozen plan to join one of the military services.

Friday&rsquo;s ceremony wasn&rsquo;t much different from years past, with one big exception, according to organizers: all the preparation put into securing the event venue, the Fruchthalle, smack dab in the middle of downtown Kaiserslautern. Graduation rehearsals had to be juggled with building sweeps, said English teacher Matt Johnson, one of two senior class sponsors.

Also unusual was the sudden popularity of graduation tickets when it was announced Gates would be speaking. Each graduate was allotted five tickets. &ldquo;People were coming out of the woodwork wanting tickets,&rdquo; Johnson said.

Beckwith expects her students will remember the evening for a long time. &ldquo;They asked. He responded,&rdquo; she said of Gates. &ldquo;What a wonderful thing to end your high school career with.&rdquo;