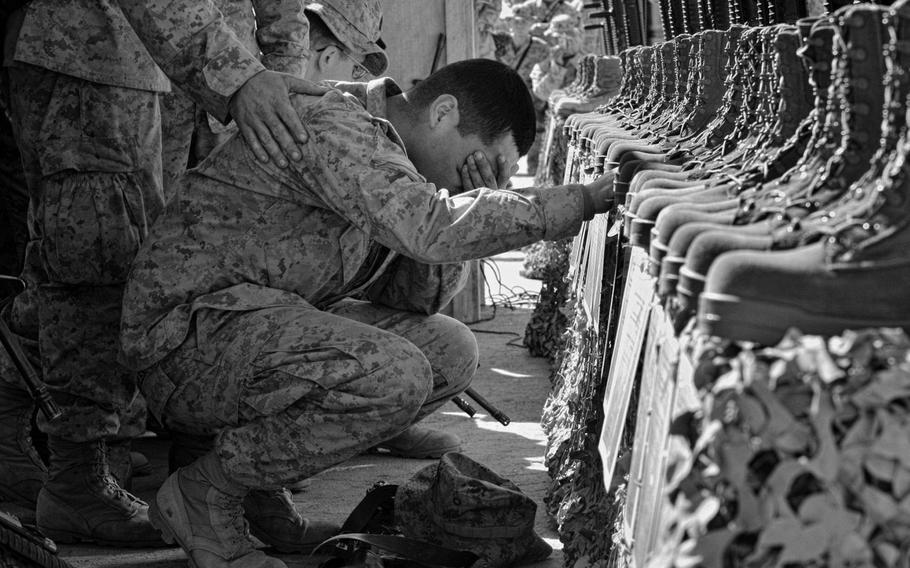 A U.S. Marine is lost in tears during the memorial service for 31 servicemembers killed at Camp Korean Village, near Ar Rutbah, western Iraq, on Feb. 2, 2005. Thirty Marines and one sailor died on Jan. 26, 2005, when their helicopter crashed near Rutbah while conducting security operations. (Anja Niedringhaus/AP)

A U.S. Marine is lost in tears during the memorial service for 31 servicemembers killed at Camp Korean Village, near Ar Rutbah, western Iraq, on Feb. 2, 2005. Thirty Marines and one sailor died on Jan. 26, 2005, when their helicopter crashed near Rutbah while conducting security operations. (Anja Niedringhaus/AP) 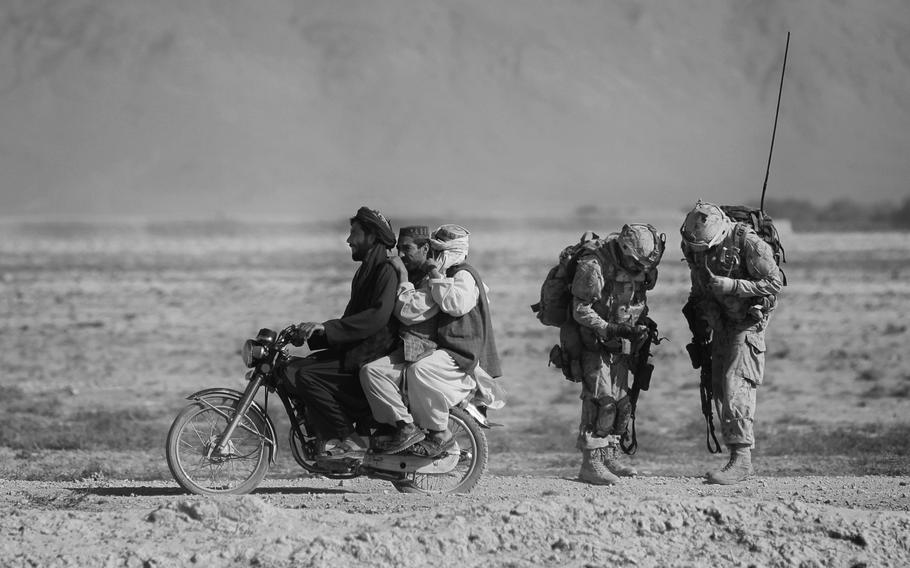 Afghan men on a moto bike overtake Canadian soldiers of the Royal Canadian Regiment on patrol in the district of Panjwai, southwest of Kandahar, Afghanistan. (Anja Niedringhaus/AP) 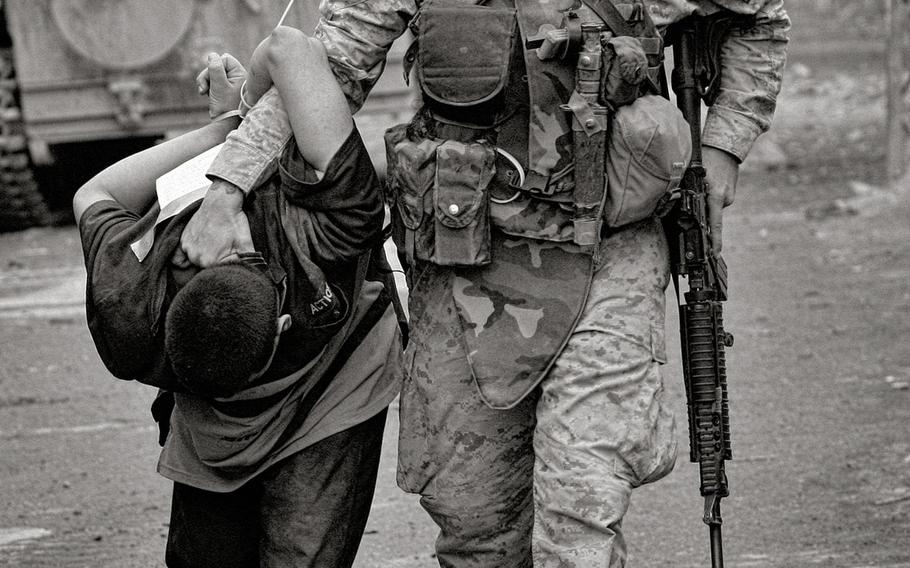 A U.S. Marines handles a detainee at the start of the second battle of Fallujah, Iraq. (Anja Niedringhaus/AP) 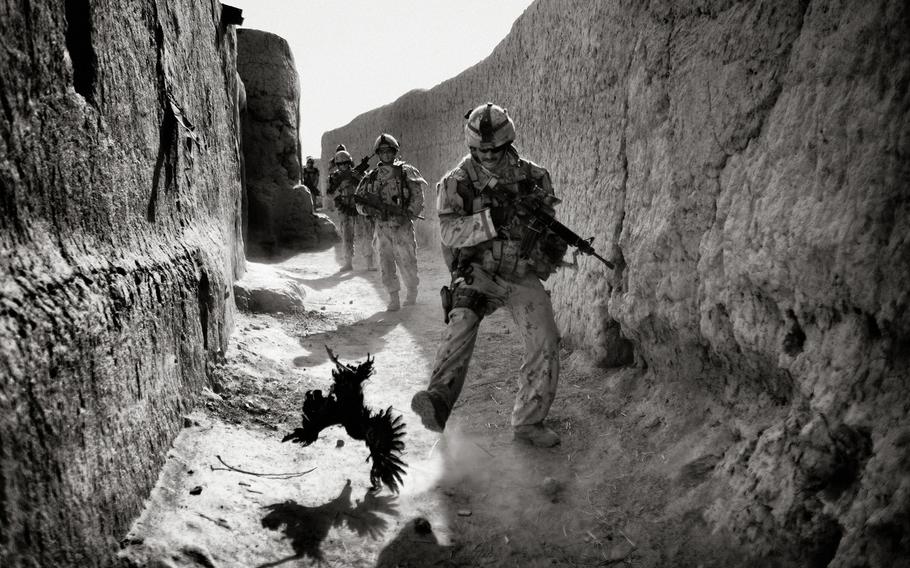 A Canadian soldier shoos a chicken out of the way moments before his patrol is attacked with grenades in Kandahar province's Panjwai district in Afghanistan. (Anja Niedringhaus/AP) 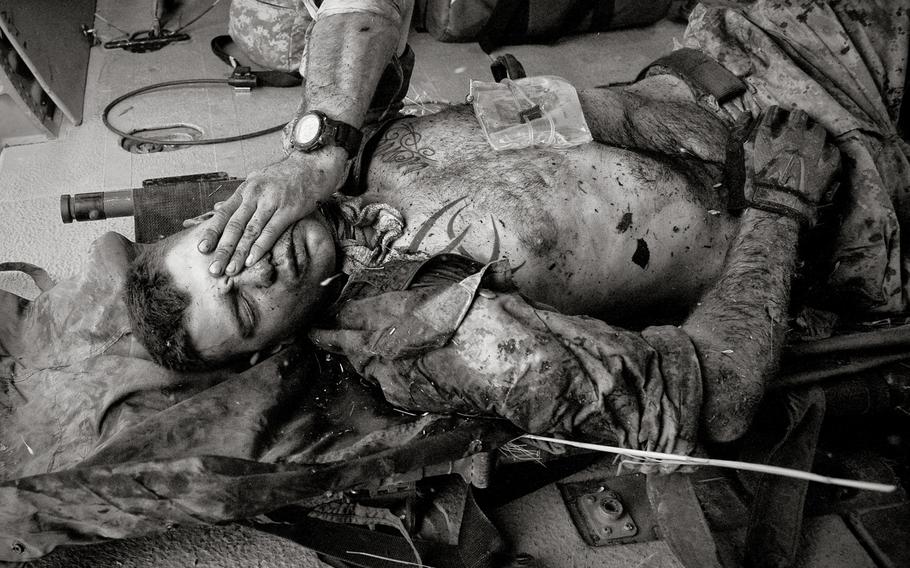 U.S. Marine Cpl. Burness Britt lies on the floor of a medical evacuation helicopter after being struck in the neck by shrapnel from a makeshift bomb while on foot patrol in Helmand province's Kajaki district in Afghanistan. (Anja Niedringhaus/AP) 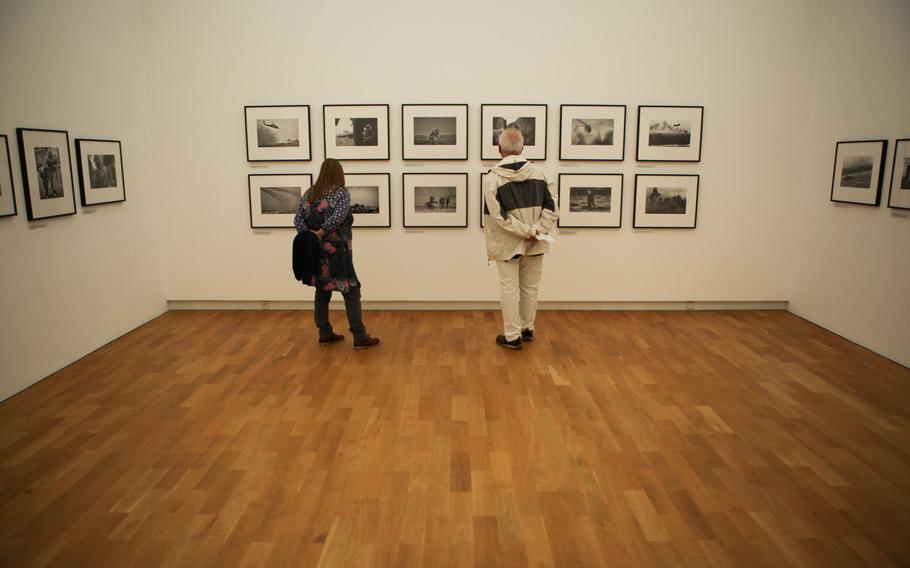 Buy Photo
Visitors to Kaiserslautern's Pfalzgalerie look at photographs by slain war photographer Anja Niedringhaus, who was killed while covering the Afghan elections in April 2014. (Matt Millham/Stars and Stripes)

KAISERSLAUTERN, Germany — A collection of photographs by an Associated Press war photographer gunned down in Afghanistan a year ago is on display at the Pfalzgalerie through April 26.

German-born Anja Niedringhaus, who won a Pulitzer Prize for her work in Iraq, spent more than two decades covering conflict around the world. She was shot dead April 4, 2014, by a policeman while covering preparations for Afghanistan’s presidential elections.

The exhibit, which contains more than 70 photographs, deftly captures the horror and humanity of the wars Niedringhaus covered. Haunting images from Balkan graveyards are intermixed with shots of playfulness, pain and fear from the wars in Iraq and Afghanistan, Gaza and the Arab Spring in Libya.

A young girl’s eyes pierce the lens as a U.S. Marine searches a house in Baghdad’s Abu Ghraib district.

A child waves a toy gun while riding a merry-go-round at a festival in Kabul.

A bloody Marine clings to life as he is airlifted off the battlefield in Kajaki, Afghanistan.

Just one of the photos at the gallery is in color: Scores of nearly monochrome Marines in desert camouflage stand and squat in a horseshoe formation in the Kuwaiti desert in December 2002, waiting for the invasion of Iraq to begin. At the bottom of the photo, a bright red Santa Claus addresses the crowd.

Photos from the U.S.-led wars in Iraq and Afghanistan make up most of the collection. The exhibition also includes images of the fighting between Israel and the Palestinians, the breakup of Yugoslavia, the turmoil in Libya and other conflicts.

Two dozen more pictures by Niedringhaus are on display at Kaiserslautern’s Pfalztheater and can be viewed for an hour before performances.

The Pfalzgalerie is open 11 a.m. to 8 p.m. Tuesdays and 10 a.m. to 5 p.m. Wednesdays through Sundays. Admission is 5 euros each or 10 euros for a family ticket. The Pfalztheater’s schedule is posted at www.pfalztheater.de. For more information on the exhibit, go to www.mpk.de.