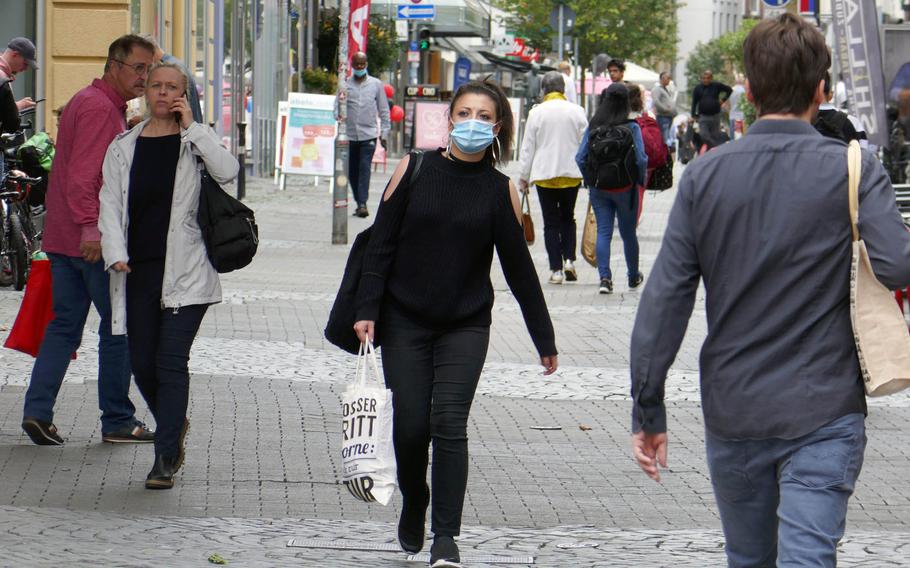 People walk down Marktstrasse in downtown Kaiserslautern, Germany in late August 2020. A spike in coronavirus cases in Kaiserslautern led health officials to raise the health alert for the city to the second-highest level on Oct. 9, 2020. (MICHAEL ABRAMS/STARS AND STRIPES)

The Kaiserslautern area was raised to Germany’s second-highest health alert level last week after a sudden spike in coronavirus cases that some were pinning on members of the large U.S. military community, officials said.

The alert status was raised to orange Friday after the number of cases in the area more than doubled last week, with 59 new infections reported from Wednesday to Thursday. Two days earlier, there had been a total of 54 cases reported in the area.

One German official told Stars and Stripes, on condition of anonymity because he was not authorized to discuss the matter, that the U.S. military community, which makes up about half the population in the area, was being eyed as a hot spot for the surge in infections.

But Kaiserslautern district administrator Ralf Lessmeister said the sharp rise in numbers was due to delayed reporting of cases by American military officials, who had sent the German public health authorities numerous new case reports, all at once, covering more than two weeks.

Only a fraction of the infections occurred in the past seven days, the time period used to calculate a city or region’s alert level, Lessmeister said.

Both the U.S. Air Force and the U.S. Army have bases in the area, but they report coronavirus case numbers separately to German public health officials, said Lt. Col. Will Powell, chief of public affairs for the 86th Airlift Wing at Ramstein Air Base.

“Most of our recent cases have been locally contracted or from travel within Europe. There are no ‘hot spots’ on base or within the Air Force community, but we continually emphasize the importance of following host nation restrictions and practicing proper hygiene,” he said, adding that the measures the Air Force has put into place to combat the spread of the virus, including quarantine, are more restrictive than those imposed by state officials in Rheinland-Pfalz.

Germany’s public health agency the Robert Koch Institute listed the Kaiserslautern district as red Sunday, but Lessmeister said that was done in error and case numbers in the region remained “significantly below” the limit of 50 per 100,000 inhabitants at which the health warning rating is raised to the highest level.

About 107,000 people live in the Kaiserslautern area, including roughly 50,000 Americans, he said. As of Saturday, there were 102 infections in the area, including eight new cases, according to data he posted on Facebook. Six people, including two members of the U.S. military community were released from quarantine, the data show.

Gino Mattorano, spokesman for Regional Health Command Europe, said the military does its best to provide timely information, but due to a number of factors, which he did not explain, there can be delays in reporting.

“We will continue to work to improve the reporting process to minimize delays and provide the most comprehensive, accurate information to our host-nation partners,” he said. “We value and appreciate the outstanding relationship we have with the Kaiserslautern community.”

Officials on Friday boosted measures to try to stem the spread of the virus, particularly in Landstuhl and Ramstein-Miesenbach, which district officials said were “the two municipalities hardest hit” by the surge in cases. Both are near Ramstein Air Base.

“There will be more controls by the regulatory authorities, especially on weekends,” they said in a statement released late Friday.

“The catering sector is particularly advised to comply with the applicable provisions for running a restaurant — hygiene regulations, distance rules, contact tracing.”

The increase in the number of cases “can largely be traced back to clearly defined ‘infection events’ in the catering sector and family celebrations … especially in Landstuhl and Ramstein-Miesenbach,” the statement said.

U.S. military police and German law enforcement were expected to step up patrols in the area to ensure people are complying with social-distancing and other prevention rules.

“We will check to see if people are wearing their masks and keeping their distance,” said Bernhard Christian Erfort, a Kaiserslautern police spokesman.

New cases have increased sharply in the past week across Germany, with the country’s public health agency, the Robert Koch Institute, reporting 3,483 new cases on Sunday compared with the day before.

The hardest-hit cities in southwestern Germany, where the majority of U.S. bases are located, were Frankfurt and Esslingen, which have been labeled as “extreme risk” areas for the coronavirus.

U.S. Army Garrison Rheinland-Pfalz warned against travel to Frankfurt in a message posted on Facebook.

“FRANKFURT is now RED (High Risk for COVID infection), according to RKI,” it said, referring to the Robert Koch Institute.

“Your plans should not include the Frankfurt metro area,” the Facebook message said.

German Chancellor Angela Merkel said Friday after meeting with the mayors of Germany’s 11 biggest cities that tougher measures against the virus would be imposed immediately if more than 50 cases per 100,000 inhabitants are reported in an area over the course of a week. Frankfurt has already exceeded that case load, according to Deutsche Welle.

Other measures that could be imposed to prevent a second wave of the virus in Germany include curfews, restrictions on the sale of alcohol, and limits on public and private gatherings.