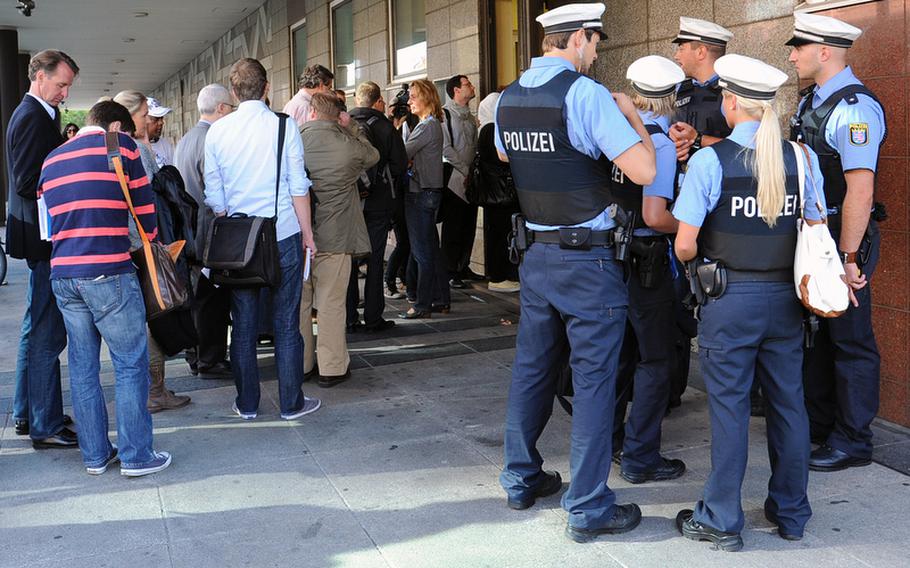 Police watch as spectators and the media line up to enter the Frankfurt, Germany, courthouse where the trial of Arid Uka began in Aug. 31, 2010. Uka is charged with two counts of murder for the slaying of Senior Airman Nicholas Alden and Airman 1st Class Zachary R. Cuddeback at the Frankfurt Airport on March 2. Two other airmen were wounded in the attack. (Michael Abrams/Stars and Stripes file)

HEIDELBERG, Germany &mdash; Judgment and sentencing in the trial of the man charged with killing two U.S. airmen at Frankfurt Airport last year has been postponed, as additional evidence came to light, the Frankfurt court said Tuesday in a news release.Three professional judges had been scheduled to give their judgment and sentence Thursday in the case against Arid Uka.

&ldquo;New evidence has been revealed in the criminal proceedings against the alleged, so-called Airport attacker Arid U., that make it necessary to resume reviewing evidence,&rdquo; the statement said.Uka, 21, a Kosovo Albanian who confessed to the March 2 shootings during his first trial date in August, is charged with two counts of murder and three counts of attempted murder &mdash; for two wounded airmen and a third he fired at, only to have the gun jam. He faces Germany&rsquo;s harshest sentence, life in prison with parole eligibility after 15 years. Findings of &ldquo;severe guilt&rdquo; would extend the time before parole was possible, perhaps by five years, German legal experts have said.The judges will hear from another witness Thursday, then decide whether to continue with the trial and call more witnesses, or allow the lawyers to give new closing arguments and Uka the opportunity to make a closing statement, a court official said. The court official would not give further information. If the judges decide to wrap up the trial, they will give judgment and pronounce sentencing Jan. 30, the court said.

The evidence had to do with a newspaper report that Uka allegedly attended a terrorist training camp in Bosnia in the summer of 2010, according to lawyers with knowledge of the case. A prosecutor knowledgeable about the case but who was not authorized to discuss it said the court wanted to review that information.The report said Uka was seen in the Bosnian town of Zenica in the summer of 2010. &ldquo;We have strong evidence [Uka] stayed in Kosovo at the end of June and the middle of July,&rdquo; said Uka&rsquo;s defense attorney, Jens Joerg Hoffman. &ldquo;We don&rsquo;t have any evidence, and the federal prosecutors don&rsquo;t have any evidence, showing he ever attended such a camp.&rdquo;

Prosecutors and police have said that Uka was on a &ldquo;personal jihad&rdquo; and that he&rsquo;d acted alone after becoming radicalized by Internet propaganda.At the start of his trial in August, Uka confessed to killing Senior Airman Nicholas Alden, 25, and Airman 1st Class Zachary Cuddeback, 21, who was the driver of the bus that was to take airmen to Ramstein Air Base en route to a deployment in Afghanistan. Uka is also charged with three counts of attempted murder. Staff Sgt. Kristoffer Schneider and Senior Airman Edgar Veguilla were wounded. When Uka pointed the gun at another airman, Staff Sgt. Trevor Brewer, 23, the gun jammed.Uka told the court in August that he was influenced by jihadist propaganda on the Internet. He said he wanted to prevent U.S. servicemembers from going to Afghanistan, where he believed they would rape Muslim girls.Schneider, Veguilla and Brewer testified during the trial. Schneider and Brewer identified Uka in testimony, as did a third airman.montgomeryn@stripes.osd.mil