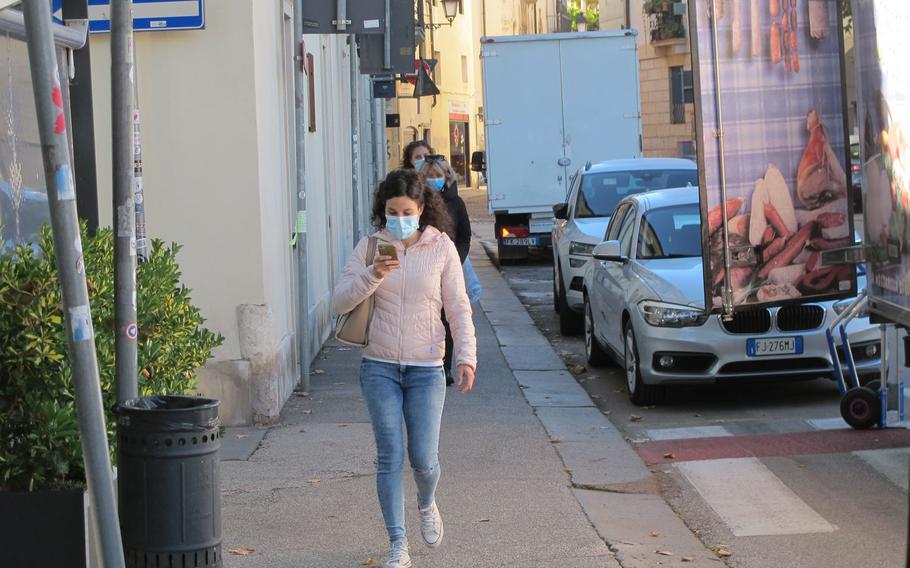 Buy Photo
Italy made wearing face coverings mandatory throughout the country on Thursday, October 8, 2020, including while outdoors. (Nancy Montgomery/Stars and Stripes)

The Italian government made wearing face masks compulsory starting Thursday, including when outdoors, and raised fines for those caught without them.

The move affected U.S. bases in Italy and came as the number of coronavirus cases in the country rose in recent weeks, just as it has in other parts of Europe.

“Together with Germany, we are the country that is better withstanding the second wave,” Italian Health Minister Roberto Speranza told the Senate on Tuesday, according to The New York Times. “But we should not be misled. It would be deeply wrong to think that we are out of it.”

Cases numbers have grown for nine consecutive weeks and haven’t been limited to one area of the country as they were early in the pandemic.

Italy became the first European country to lock down in February, when an overwhelming number of cases swamped hospitals in the northern regions.

“Today, no region can feel not at risk,” Speranza said.

The new rules specify that people should always have a face mask whenever they leave their own home, using it “even outdoors when in proximity to other people not from the same household.” It also requires masks to be worn in workplaces.

Fines for violating the mask order now range from 400 to 1,000 euros, but regions may impose stiffer penalties. In Lazio, fines range from 500 to 3,000 euros, Italy’s The Local reported Wednesday.

Children under 6 and people with disabilities that don’t allow mask use are exempt from the rules, Italy’s Presidency of the Council of Ministers said on its website. Masks also won’t be required for people engaged in sports activities, it said.

Several regions of Italy had already made wearing face masks outside compulsory in response to local spikes in the number of new coronavirus infections, including Lazio, Campania, Sicily, Calabria, Basilicata, Piedmont and Le Marche.

Troops with U.S. Army Garrison Italy in Vicenza, which is in Veneto, and at Aviano Air Base, in Friuli Venezia Giulia, also would have to wear masks while outdoors under the new law.

Previously, masks only were required indoors, although the 173rd Airborne Brigade in Vicenza required its soldiers to wear masks outdoors as well.

Italy has had nearly 36,000 deaths due to COVID-19 so far, just under 323,000 total infections and around 26,000 new infections over the last two weeks, according to the European Centre for Disease Prevention and Control.