'I feel that we have been abandoned': US military families in Europe frustrated by vaccine shortages 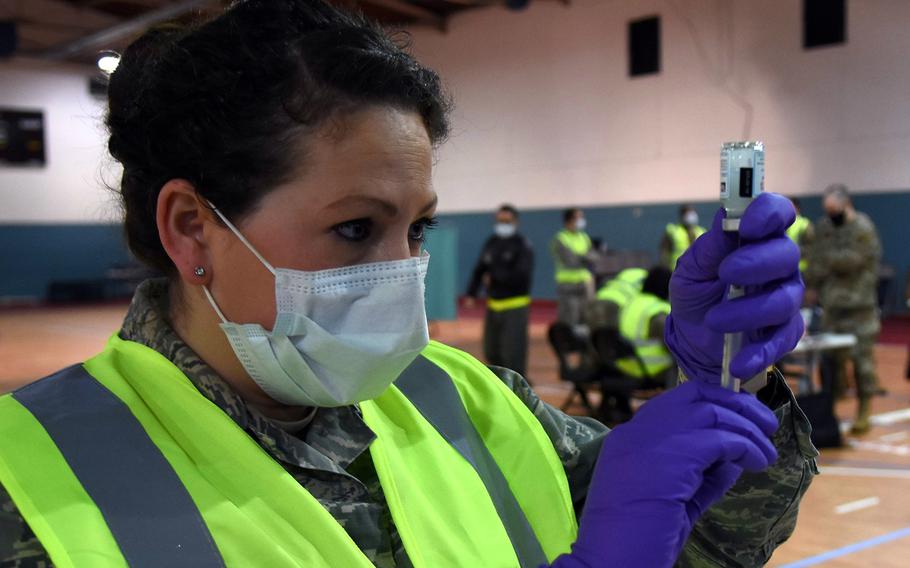 KAISERSLAUTERN, Germany — Coronavirus infections are soaring and new lockdowns are looming across Europe, but vaccination campaigns have ground to a halt on some U.S. bases on the Continent, with officials blaming lagging supplies and uneven distribution.

As of last week, about 8% of Army personnel and their families in Europe were fully vaccinated, and about 18% had received one dose of the coronavirus vaccine, officials said.

The largest U.S. military hospital overseas, Landstuhl Regional Medical Center, last week canceled appointments for shots because of a vaccine shortage, it said, although some appointments were reinstated at the end of the week.

In Belgium, “all of our vaccine has been given out … we’re not getting it in as fast as we thought,” Army Col. Kathleen G. Spangler, commander of the SHAPE Healthcare Facility and Brussels Army Health Clinic, said Friday during a virtual town hall meeting with U.S. Army Garrison Benelux leaders.

Army officials said they expect more vaccine to arrive in Europe this week, but were unable to say when vaccinations will be available beyond the top two priority groups, which include medical workers, deployable forces, some critical workers and people over 75 years old.

“Senior military leaders in Europe are working very hard with the Department of the Army to get us more vaccine,” the commander of Regional Health Command Europe, Brig. Gen. Mark W. Thompson, said in an online video message last week.

U.S. Naval Hospital Naples was able to fully vaccinate 40% of eligible personnel, but is now placing anyone who wants the shot on a standby list, spokeswoman Christina Clarke said.

They will be contacted “as soon as more vaccine becomes available,” she said.

Follow-up shots are still being administered for those who have had a first dose, she added.

William Black, 67, a Marine Corps retiree with underlying health conditions who lives in Wiesbaden, got himself and his wife on the list in Naples for their first shots March 6, after the Navy base opened its inoculation effort to the general U.S. military population.

But when he contacted the base recently to say they planned to drive from Germany for the jabs, they were told vaccinations had temporarily been stopped, he said.

“It was a good try, but no success,” he said. “They probably didn’t want a flood of old retirees driving or flying to Naples to get their shots.”

About 14% of eligible Air Force personnel in Europe have had two doses of the Moderna vaccine, and 22% have had one dose, U.S. Air Forces in Europe - Air Forces Africa spokeswoman 1st Lt. Hannah Durbin said.

At Ramstein Air Base, a hub for U.S. operations in Europe, Africa and the Middle East, people in the top two tiers will be prioritized for the vaccine “until we receive a significant increase in our supply,” said Lt. Col. Will Powell, a spokesman for the 86th Airlift Wing.

A military spouse in Belgium told Stars and Stripes that personnel in the same position as her husband in the States were vaccinated in December, but neither he nor anyone else in his unit in Europe has had the shot.

“I feel that we have been abandoned by the Department of Defense, who are sending thousands of doses of COVID-19 vaccines to military bases within the U.S., where those military members and their families have the option to go to any pharmacy or mass vaccination event in their town to be vaccinated,” she said on condition of anonymity because of concerns about access to the vaccine for her family.

The Army is allocating between 12,000 and 15,000 first doses each week meant for the 157,000 personnel in its top two priority tiers. The service directs how to distribute it to about 80 vaccination sites worldwide, said Maj. Jackie Wren, an Army spokeswoman.