U.S. Air Force Master Sgt. Emily Jones, 39th Medical Operations Squadron dental flight chief, holds a puppet as children from the Incirlik Unit School demonstrate proper toothbrush technique Feb. 19, 2016, at Incirlik Air Base, Turkey. The Defense Department has announced on Tuesday, March 29, 2016, that it will start the evacuation all dependents, including some 270 schoolchildren, from the base for force-protection reasons. (Jack Sanders/U.S. Air Force) 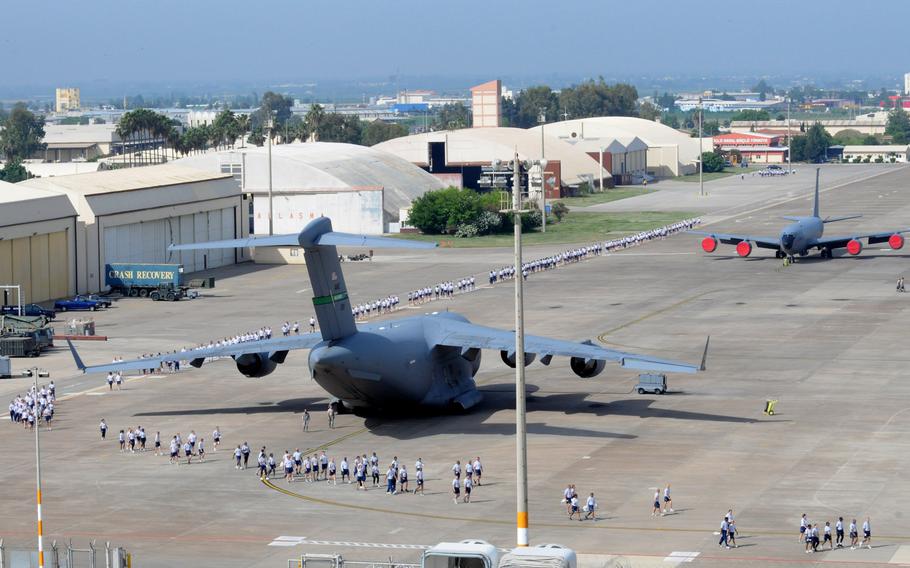 Airmen spread out to begin a foreign-object-debris walk to remove trash and other objects from the flight line at Incirlik Air Base, Turkey, in 2012. The Defense Department has announced on Tuesday, March 29, 2016, that it will start the evacuation all dependents from the base for force-protection reasons. (U.S. Air Force) Base housing at Incirlik Air Base will soon be near empty after the Defense Department announced on Tuesday, March 39, 2016, it will start the evacuation all dependents from the base for force-protection reasons. (U.S. Air Force) 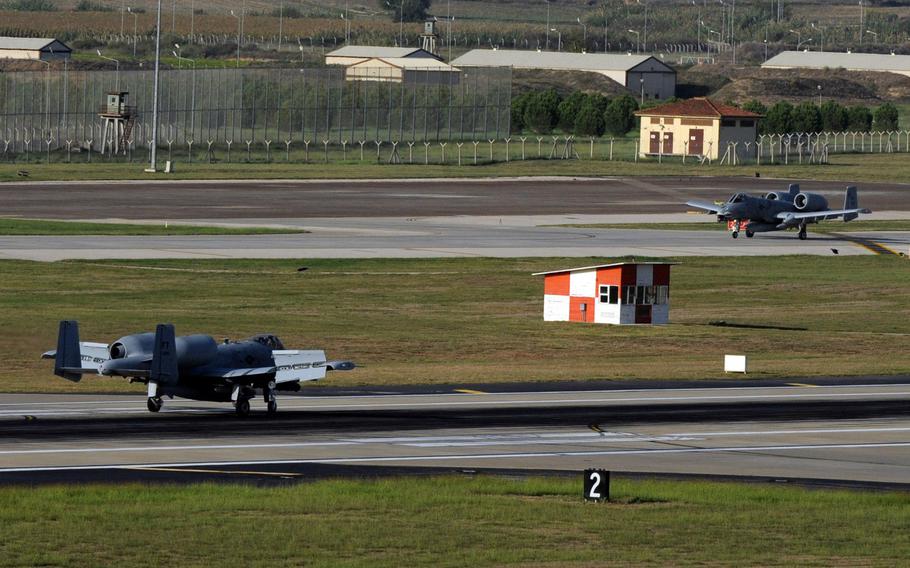 Two A-10C Thunderbolt II attack aircraft taxi down the flight line after landing at Incirlik Air Base, Turkey, Oct. 15, 2015. The aircraft are deployed to Turkey in support of the coalition effort against the Islamic State and Operation Inherent Resolve. (U.S. Air Force)

KAISERSLAUTERN, Germany — The Pentagon is ordering nearly 700 military family members to leave Incirlik Air Base and two smaller military installations in Turkey because of concerns over the deteriorating security environment there.

Families are expected to begin leaving Turkey on Wednesday, stopping first at Ramstein Air Base in Germany, before continuing on to the States or other duty locations, U.S. European Command told Stars and Stripes.

“We understand this is disruptive to our military families, but we must keep them safe and ensure the combat effectiveness of our forces to support our strong ally Turkey in the fight against terrorism,” EUCOM chief Gen. Philip Breedlove said Tuesday in a statement.

The mandatory departure order, announced by the State Department, affects nearly all Defense Department dependents assigned to Incirlik, as well as those at smaller bases in Izmir and Mugla. The families of U.S. diplomats in the same areas also are ordered to depart.

On Monday Israel issued a new travel advisory for Turkey, warning Israeli citizens to leave the country as soon as possible and avoid any traveling there.

About 670 dependents are expected to be evacuated, along with 287 pets. About 770 dependents, most from Incirlik, are currently in Turkey, EUCOM spokeswoman Julie Weckerlein said. Those allowed to stay are family members with mission-essential jobs.

The dramatic move to get families out of Turkey comes several weeks after Americans at Incirlik were put on base lockdown, when the force-protection level was raised to the military’s highest threat condition. The elementary/high school at Incirlik was temporarily shuttered on March 9 as a result.

Classes for Incirlik students resumed Monday and Tuesday at different locations on base, but that arrangement appears to be short-lived given Tuesday’s announcement.

Some families had already opted to leave Incirlik. In September, the Air Force authorized the voluntary early departure of residents, a temporary measure that resulted in about 100 family members leaving for the States. School enrollment since the fall has plummeted by more than 100 students, leaving about 250 students at the school.

Also in September, the Air Force suspended the move of U.S. servicemembers’ families to Incirlik, an early signal of the growing concern over violence in the region.

Incirlik has one of the smallest populations of any U.S. Air Forces in Europe facility, with fewer than 2,000 airmen normally assigned there. Weckerlein said no decisions have been made on the future status of Incirlik as a continued destination for families.

“They will review this in the future,” she said.

The evacuation does not signify a permanent decision to end accompanied tours to Turkey, EUCOM said.

“It is intended to mitigate the risk to DOD elements and personnel, including family members, while ensuring the combat effectiveness of U.S. forces and our mission support to operations in Turkey,” according to the EUCOM statement.

Still, the long-term prospects for Incirlik as an accompanied destination appear to be in limbo.

Last week, the Incirlik base commander said during an American Forces Network “commander’s corner” spot that there was nothing official yet regarding changing the status of Incirlik as an accompanied tour for airmen. But, if there were a transition, “it wouldn’t surprise me to see Kunsan-style assignments where everybody is on a one-year remote,” said Col. John Walker, 39th Air Base Wing commander, in the video posted Friday to the base’s Facebook site. He was referring to airmen based in South Korea.

Uncertainty about the nature of future deployments to the base comes as military operations at Incirlik have increased. Now, the base is on the front lines of the fight against the Islamic State group in Syria and Iraq, with U.S. fighters routinely launching from Incirlik on strike missions.

In July, U.S. troops and aircraft began rotating through Incirlik in larger numbers as part of the ramping up of the air campaign. At the same time, NATO allies have been conducting operations from Incirlik, including surveillance flights around the Turkish border.

For the U.S., Incirlik Air Base has long been a strategic spoke for U.S. forces, dating back to the Cold War. While Incirlik has no permanent U.S. aircraft assigned, the base has long served as a temporary hub for cargo and refueling missions supporting U.S. aircraft in places such as Iraq and Afghanistan.

The base also is only about 200 miles from the Syrian border, where the transit of foreigners back and forth to Turkey has been a long-standing concern for the U.S. and its allies.

The town of Incirlik, a small village, is about 10 miles from the largely conservative Turkish city of Adana, home to nearly 2 million people.

NATO's Allied Land Command is based at Izmir and there is a Turkish base at Mugla where some U.S. military personnel go for training and other missions.