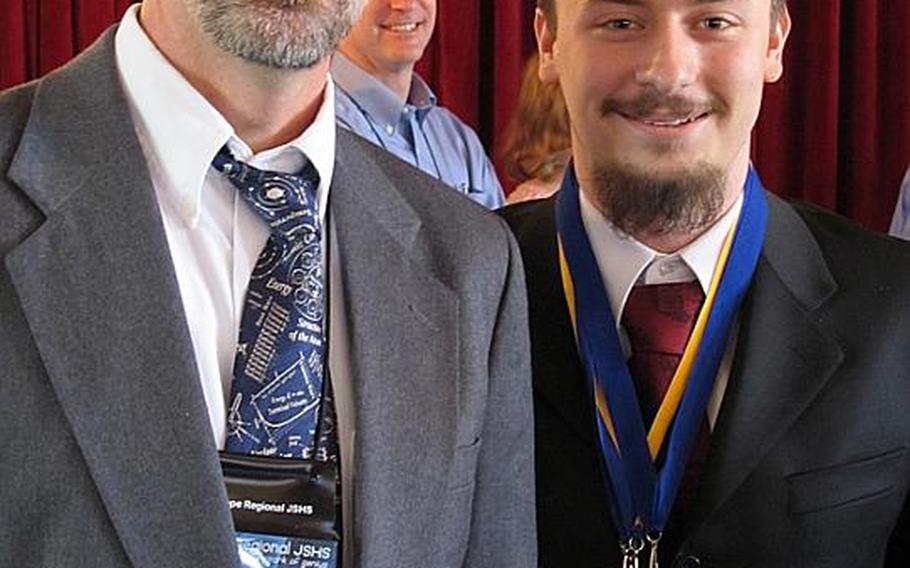 Kevin Burdge, a senior at Heidelberg High School in Germany, received the top award for his presentation at a science and humanity symposium sponsored last month by the Department of Defense Dependents Schools-Europe, according to a news release from the school system.

Burdge, one of more than 160 student participants in the 37th Annual Junior Science and Humanities Symposium, gave an oral explanation of his project, &ldquo;Holographically computing the entanglement entropy of an annulus in a strongly coupled conformal field theory,&rdquo; at a meeting in at Reidstadt.

For winning the Europe-wide competition Burdge received a $2,000 scholarship and some cash prizes, and will compete in the National JSHS in San Diego at the end of this month.

He was also named the overall science champion in the 11th- and 12th-grade subject tests given to participants in physics, chemistry and biology.

The mission of the JSHS program is to attract students to scientific, technology, engineering or mathematics careers, said Dr. Lynn Smith, European regional JSHS director. The research program allows students to delve far deeper than they would be able to in a normal high school science class.

&ldquo;It is a nice opportunity they offer us over here,&rdquo; Burdge said of the program. &ldquo;I&rsquo;m really looking forward to the nationals because those are going to be a lot more competitive, I think.&rdquo;

His father is a civilian computer programmer for the military and Burdge says that is where some of his technological instincts came from, but it wasn&rsquo;t until an advanced-placement physics class his freshman year in high school that he found his passion for the subject. Then he started reading about theoretical physics and fell in love with it.

Kira Rahn, a sophomore at Kaiserslautern High School, finished third in the competition for her presentation, &ldquo;Facebook or not? A study of the affect on test scores when studying on Facebook.&rdquo;

&ldquo;It is a good opportunity to get out of school for a couple of days, you learn a lot and, if you win, you get money, like scholarship money, and I get to go to California,&rdquo; she said of the program.

For her study, she developed tests for 56 friends to take. Half the students studied while on Facebook, the other half did not and then all took the tests. The study found that studying while on Facebook did not have a negative outcome on the students&rsquo; scores &mdash; although she noted that other research on the same subject found that studying while on social media sites did affect students&rsquo; grade point averages.

Colin McDonnell of Lakenheath High School in England was the second-place finisher for his presentation &ldquo;Analysis of subliminal suggestion via conscious observation of visual media.&rdquo;

All three students were awarded scholarships, $250 in cash and a trip to the National JSHS to present their work on a national stage.

Ashley Charles of Wiesbaden High School won a $200 scholarship and a trip to San Diego for finishing first in the poster presentation category for her research on &ldquo;The correlation between music and recall memory.&rdquo;

Allison Moczynski of Hohenfels High School was second in that competition for her project titled &ldquo;How environmental factors affect the recovery of latent fingerprints,&rdquo; and Patrick Roos of Heidelberg High School was third for &ldquo;The effects of elevated heart rate on average reaction time to visual stimuli.&rdquo;

Participants also took tests in certain subjects throughout the year and then compiled their scores. Winners for ninth- and 10-graders were:

Winners for 11th- and 12th-graders were:

Darrell Rahn of Kaiserslautern High School was selected the teacher awardee for 2011. He will also attend the national symposium and receive a $500 national award.

Scholarships and traveling costs were paid for by a tri-services organization consisting of Academy of Applied Sciences, the U.S. Army Research Office, the Office of Naval Research and the Air Force Office of Scientific Research and DODDS-Europe, according to the release.