'He was the love of my life': Air Force pilot who died in F-15 crash remembered for his kindness and faith 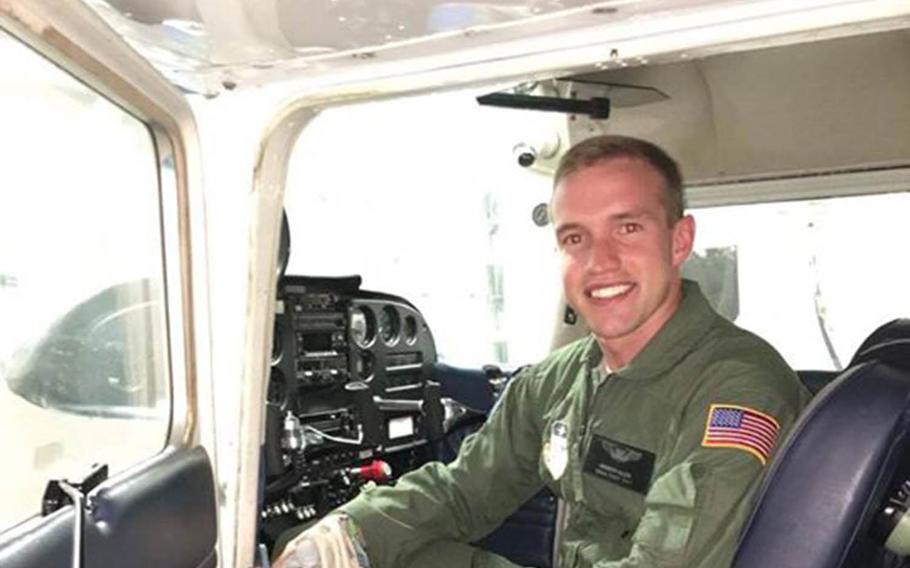 Air Force 1st Lt. Kenneth Allen died in an F-15C fighter jet crash in the North Sea off the coast of England on Monday, June 15, 2020. (Facebook)

The young Air Force pilot killed in an F-15C fighter jet crash in the North Sea off the coast of England this week was a man of strong faith who showed love and respect for others, even in the face of danger, friends and family recalled.

Air Force 1st Lt. Kenneth Allen, 27, a pilot with the RAF Lakenheath-based 48th Fighter Wing, was identified Tuesday, hours after his body was recovered and next of kin had been contacted.

“He is gone. I’m shaking,” said his wife of several months, Hannah Allen, in a Facebook post late Monday, after the Air Force had confirmed that her husband had died when his F-15C Eagle crashed into the North Sea that morning.

“Kage was perfect, never been treated with more love and respect in my life. He was my absolute best friend,” she said, using the name many called him by.

Before the crash, which occurred during a routine training flight, emergency communications were heard on a “frequency used throughout NATO,” The Aviationist website reported.

“Life doesn’t feel real,” Hannah Allen wrote. “Right now Kage has presumably passed. Right now we need time to process this shock. … He is the love of my life. I don’t know what I did to deserve him or be [part] of his family.”

Allen’s body was found Monday evening, several hours after the British coast guard located the wreckage of the plane off the English coast.

A 2017 graduate of the U.S. Air Force Academy, Allen did a yearlong missionary trip to Chile with the Church of Jesus Christ of Latter-day Saints, widely known as the Mormon church, before attending the military school, a friend and fellow missionary said on Facebook.

He was assigned to the most difficult area “in a section of the very worst part of Santiago,” David Cook recalled in the post.

The area of the Chilean capital was “a place where the Carabineros (police) did not go,” Cook said. “Not once did he complain.”

The mission’s motto was “Hacia las Alturas,” or “to the heights” in Spanish, Cook said.

“What a fitting motto for Kage and his dream to be a fighter pilot.”

After pilot training at Vance Air Force Base, Okla., and Kingsley Field Air National Guard Base, Ore., Kage Allen arrived at Lakenheath in February. He and his wife had married in a civil ceremony before he reported, in order to get ahead on military paperwork to bring her overseas, Hannah Allen said in a Facebook post in April.

Their plans for a church wedding were delayed by the coronavirus outbreak, she said.

“We are looking forward to celebrating with you all in the future! (It’s going to be a party!) For now, we are grateful to have each other, even if half a world apart,” she wrote.

Allen was the assistant chief of weapons and tactics for the 493rd Fighter squadron, the wing said in a statement.

“We are deeply saddened by the loss of Lt. Allen, and mourn with his family and his fellow Reapers in the 493rd Fighter Squadron,” Col. Will Marshall, the wing commander, said in the statement. “The tremendous outpouring of love and support from our communities has been a ray of light in this time of darkness.”

On Tuesday, Hannah Allen reposted a video of the last song her husband played for her on his guitar, just days before he died. In it, he sings the lyrics of Jim Croce’s “Time in a Bottle,” lamenting the fleeting passage of time and the singer’s desire to spend eternity with his love.

“Christ needs hurry up and come back so I can be with Kage again,” she wrote in an earlier post, referring to the second coming of Jesus Christ that their faith promises. “I feel beyond blessed to have loved him in this life and can’t wait to love him for eternity.”