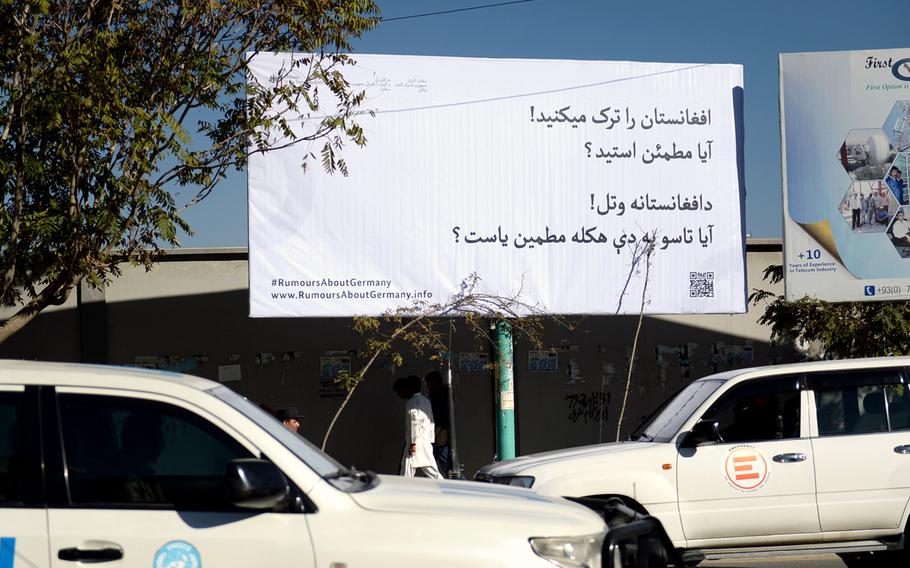 A billboard placed by the German Embassy in Kabul on Sunday, Nov. 15, 2015, asks Afghans to think twice before trying to migrate to Europe. Waves of Afghans have fled to Europe trying to flee violence and economic problems. (Josh Smith/Stars and Stripes)

KABUL, Afghanistan — The German government has launched a campaign to discourage would-be Afghan migrants from making the sometimes perilous journey in search of a better life in Europe.

With billboards in several major cities and posts on Twitter and Facebook, the German Embassy in Kabul seeks to dispel what it sees as misperceptions about Germany’s immigration policies.

The first billboards appeared in Kabul on Sunday, reading “Leaving Afghanistan? Are you sure?” in Dari and Pashto, the two main languages of Afghanistan. More billboards are scheduled to go up in Mazar-e-Sharif and Herat, Ambassador Markus Potzel told Deutsche Welle, Germany’s international broadcaster.

The placards point Afghans to a Facebook page run by the German Embassy, which warns of false promises by smugglers and seeks to debunk rumors of free jobs, immediate citizenship and welcome payments for arriving refugees.

“Do not believe the rumors and false information deliberately spread by human traffickers about the allegedly easy trip and the easy life in Germany,” reads one post on Facebook. “Do not risk your lives by trying to flee to Europe.”

Afghans make up a major portion of the refugees and migrants who have fled to Europe from the Middle East and Africa. About 1 million refugees and migrants are expected to travel to Europe this year; about 500,000 arrived in Germany — the desired destination of many beleaguered families — since the beginning of September, according to the German news magazine Der Spiegel.

But Germany has recently specifically blocked some refugees from Afghanistan, arguing that the situation in the country is not as bad as in places such as Syria.

In an interview with Deutsche Welle, Potzel said the campaign is “not about deterrence, but rather about clarification” of the risks involved in traveling to Europe, the realities of immigration policy, and the challenges refugees may face in an expensive new country. About 40 percent of Afghan asylum seekers are currently being accepted, he said, while “those who cannot present a credible case of persecution will be sent home.”

Potzel went on to acknowledge “setbacks” in Afghanistan but argued that the situation in the country is better than it is portrayed in the media.

“When looking at these pictures, it is easy to forget that the vast majority of people in Afghanistan are leading normal lives and are more concerned with the problems of day-to-day life — such as how they will feed their families — than with security issues,” he told Deutsche Welle.

The United Nations reports that civilian war casualties have hit all-time highs since the international military coalition — which includes Germany — handed over responsibility for the country’s security to Afghan forces. In September, the Taliban briefly captured the city of Kunduz, which was part of the German area of responsibility for years, and sent thousands of new refugees fleeing the fighting

In addition, rampant corruption and violence have hurt the economy in Afghanistan, where about 36 percent of the population lives below the poverty line and many are unemployed.

So far this year, some 146,000 Afghans have left for Europe, according to Afghan officials. The Afghan government, which has struggled to handle hundreds of thousands of internally displaced people, has asked Germany not to repatriate Afghans who aren’t granted asylum.

Australia, which has faced an influx of refugees from a variety of countries in recent years, has had a multimedia campaign to warn Afghans away for some time, featuring a uniformed military officer and ominous pictures of deadly seas.

Germany’s public relations campaign in Afghanistan is part of a broader strategy to reduce the number of incoming refugees, said German researcher Thomas Ruttig, co-director of the Afghan Analysts Network.

The argument by the government that many Afghans don’t deserve asylum ignores Germany’s own involvement in the ongoing conflict, Ruttig said.

“This is unfair, as it neglects the fact that the Afghans flee from a war that Germany, as part of an international alliance, has shown unable to stop — not unlike in the case of Syria and the Syrian refugees,” Ruttig said. “In effect, this German policy even pits Syrian against Afghan refugees, but refugees from war are entitled to protection in general.”

In response to the Taliban’s recent successes — even if short-lived — against Afghan forces, Germany recently announced it would increase its military presence in Afghanistan from 850 to 980 servicemembers, as the U.S. and other allies announced they were keeping larger troop numbers in Afghanistan into the end of next year.

The crackdown in Europe and horror stories of the dangerous trip, which has claimed as many as 3,500 lives, according to the International Organization for Migration, appears already to be having an effect on some would-be refugees in Kabul.

Barshir Sabir, 29, is one of them. He has been out of work since losing his job at a coalition base in Kabul in 2008.

Two months ago, he had arranged to pay a smuggler $9,000 to take him through Iran and Turkey to Germany, where he hoped to get a job to support his wife and 10-month-old daughter.

“I was just getting ready, I had my passport and was getting a visa for Iran, but suddenly my wife and father stopped me,” Sabir told Stars and Stripes. “They were watching news about migrants getting killed and drowned, so they were worried about me.”

On top of the dangers, he heard traumatic stories of refugees sent back to Afghanistan after spending their life savings to travel to Europe.

“I was fearful and didn’t want spend a lot of money just to get deported,” Sabir said.

As the situation deteriorates in their country, many Afghans will likely continue to seek safety and better economic prospects in other countries, Ruttig said.

“If my government wants to tackle the causes of the flight, as it claims, it needs to invest much more into Afghanistan than a few posters and a Facebook page,” he said.