Germany imposes another lockdown as coronavirus numbers tick up Tables and chairs remain stacked in a town square in Griesheim, Germany, March 23, 2021, as the federal government and the states announce plans to impose a lockdown over the Easter holidays to try to stem the rise of the coronavirus in the country. (MICHAEL ABRAMS/STARS AND STRIPES)

Tables and chairs remain stacked in a town square in Griesheim, Germany, March 23, 2021, as the federal government and the states announce plans to impose a lockdown over the Easter holidays to try to stem the rise of the coronavirus in the country. (MICHAEL ABRAMS/STARS AND STRIPES) Customers order ice cream from a cafe in the pedestrian district of Kaiserslautern, Germany, March 23, 2021. The German government and the states announced plans to impose a short, sharp lockdown during Easter week, to stem the rising number of coronavirus cases in the country. (Brian Ferguson/Stars and Stripes) 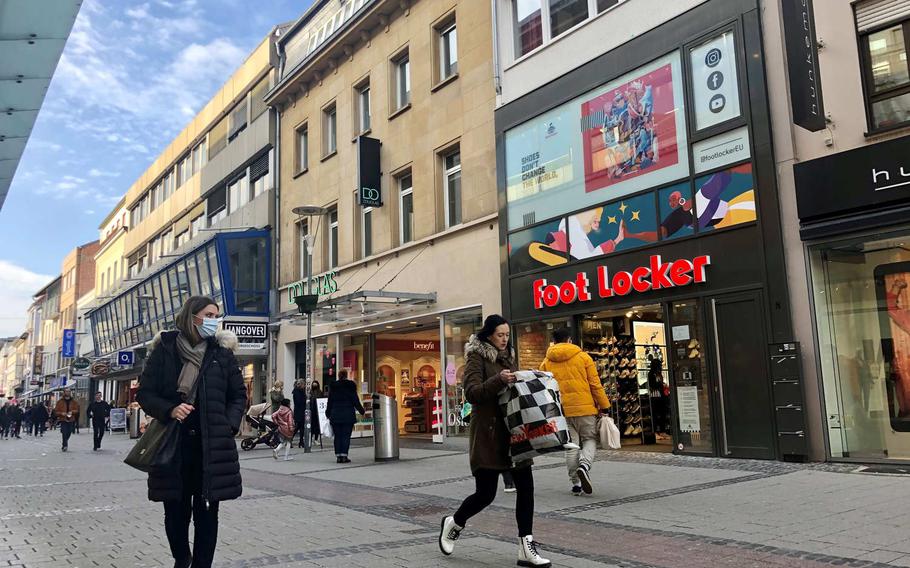 People walk past open shops in the pedestrian area of Kaiserslautern, Germany, on March 23, 2021. The German federal government and states announced Tuesday, after a 15-hour virtual meeting, that most shops will be shuttered for five days over Easter, as part of measures to try to stop an uptick in the spread of the coronavirus. (Brian Ferguson/Stars and Stripes) 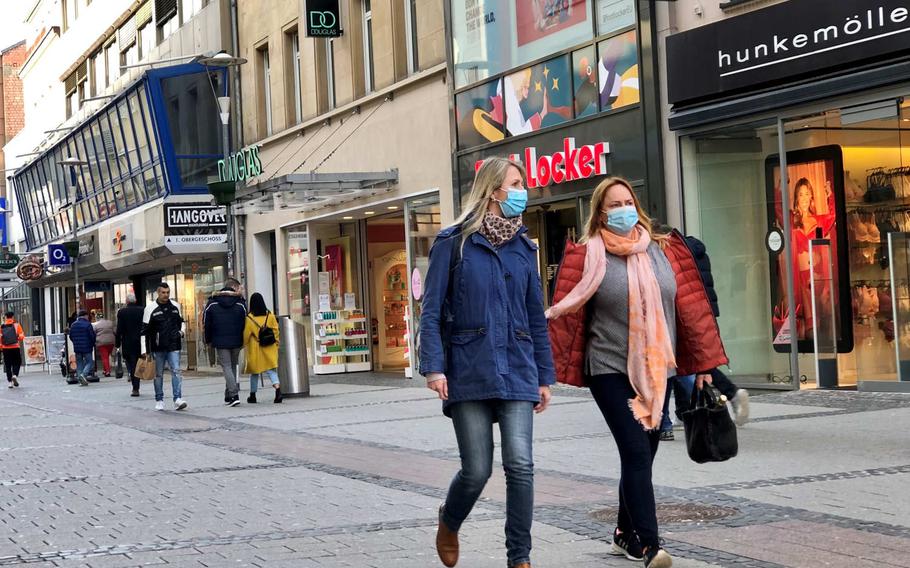 People walk past open shops in the pedestrian zone of Kaiserslautern, Germany, on March 23, 2021. (Brian Ferguson/Stars and Stripes) 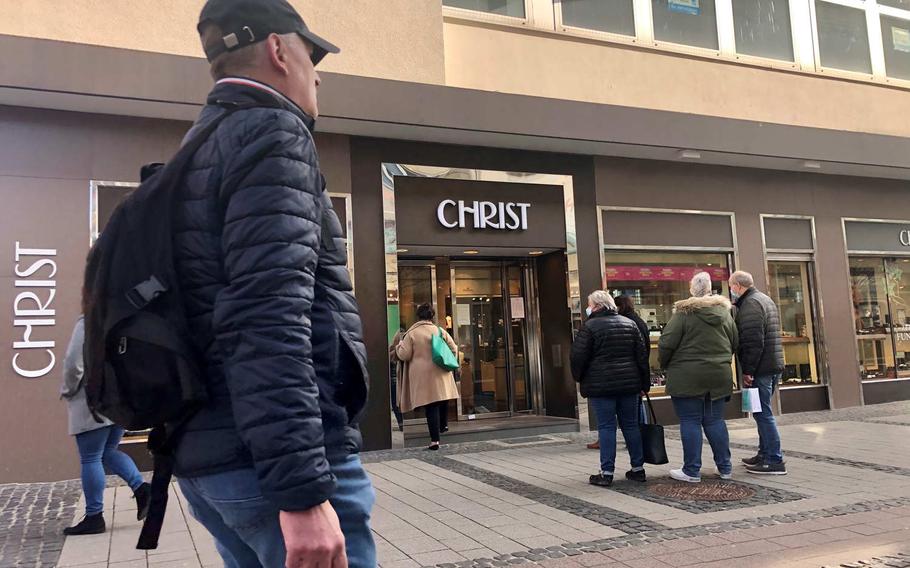 KAISERSLAUTERN, Germany — Measures announced in Germany on Tuesday aimed at stopping the spread of the coronavirus have left some, including members of the U.S. military community, wondering what the new restrictions will change and when the cycle of lockdowns will end.

State and federal government officials agreed after a 15-hour virtual meeting that ran until the early hours of Tuesday to extend restrictions that were set to end March 28 until April 18, and to shutter nearly all shops for five days over Easter.

But U.S. military officials said they will wait until state lawmakers decide how to implement the new rules before they update restrictions that apply to service members and their families.

That might not involve many changes, said Stefan Alford, spokesman for U.S. Army Garrison Rheinland-Pfalz, which includes military communities in Kaiserslautern, Baumholder and Landstuhl.

“It’s just an extension of the current lockdown we’re already in,” he said. “We’re going to continue all of the mitigations currently in place. We’ll review and readdress any changes based on host nation guidance.”

Officials at Ramstein Air Base, also in Rheinland-Pfalz, where the incidence rate of 82 new cases per 100,000 residents in the past week was well below the national average of 108 per 100,000, said they also would wait to update their coronavirus rules until state officials have made their own announcements.

Markus Soeder, the minister-president of Bavaria, which is home to U.S. Army Garrison Bavaria, said the Easter lockdown had been imposed because German officials feared that, without restrictions, “infections would hit a high point” over the holiday period.

Supermarkets in Bavaria will be able to open on the Saturday before Easter, but only to sell groceries and not clothing, toys or other household articles they often carry, Soeder told reporters Tuesday.

Shops would have been shut on Good Friday, Easter Sunday and Monday anyway, so the new rule only added a day to the time businesses would have been closed, and could backfire, said Jeremy Cliffe, international editor of the New Statesman, a political and cultural magazine.

With many Germans getting paid at the end of the month, shutting supermarkets from April 1–5, with one day open for shopping in the middle of the closure, makes it “hard not to fear that 3 April in German supermarkets will be one giant super-spreader event,” Cliffe said on Twitter.

The measures also include a requirement for all travelers entering Germany – including residents returning from a holiday in a low-risk area for the virus – to produce a negative coronavirus test, and a plea to religious communities to hold virtual Passover and Easter celebrations.

They were announced just weeks after many restrictions were loosened and shops reopened in parts of the country, including Kaiserslautern, home to a U.S. military population of tens of thousands.