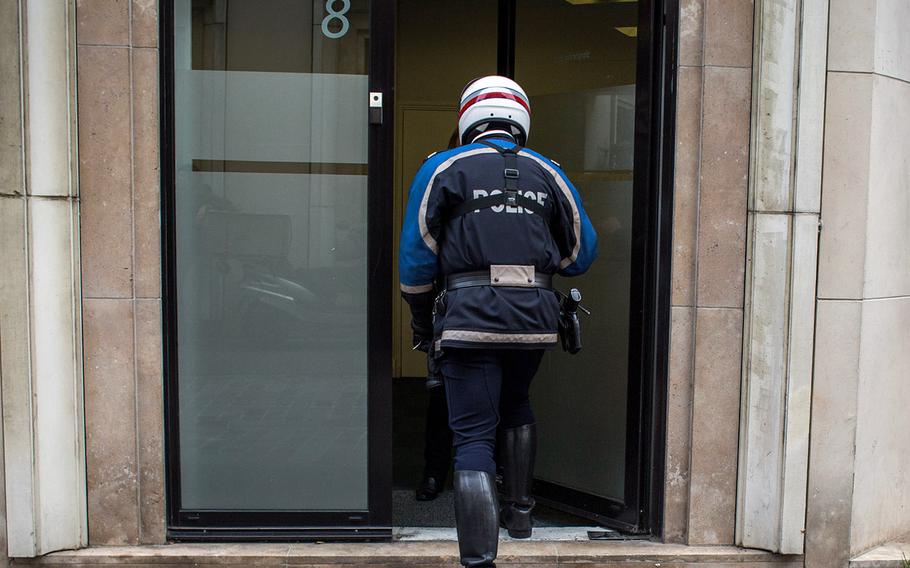 Ambulances and police officers gather in front of the offices of the French satirical newspaper Charlie Hebdo on Jan. 7, 2015 in Paris, France. (Michael Bunel, NurPhoto/Zuma Press)

Ambulances and police officers gather in front of the offices of the French satirical newspaper Charlie Hebdo on Jan. 7, 2015 in Paris, France. (Michael Bunel, NurPhoto/Zuma Press) 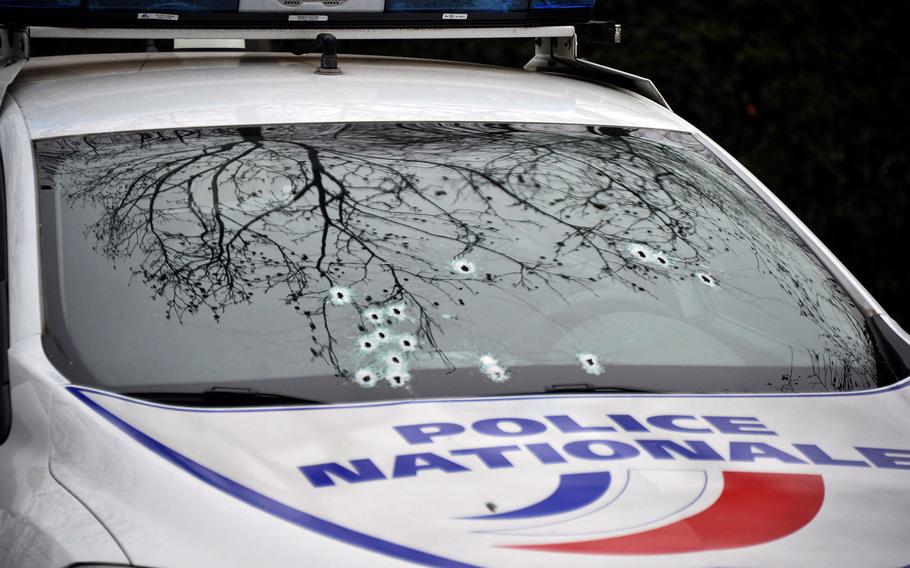 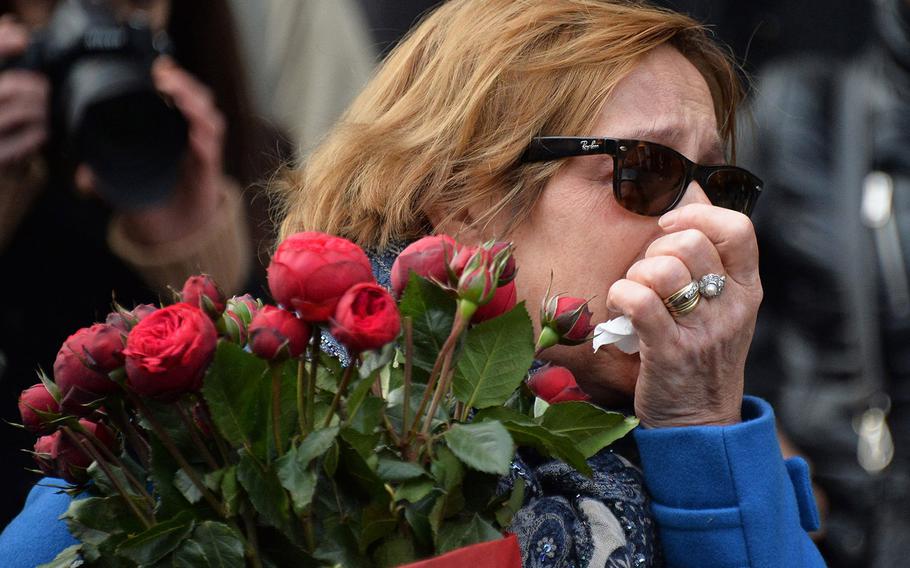 A mourner brings flowers to the scene where gunmen attacked the Paris office of French satirical magazine Charlie Hebdo on Jan. 7, 2015 in Paris, France, (Panoramic/Zuma Press/TNS) 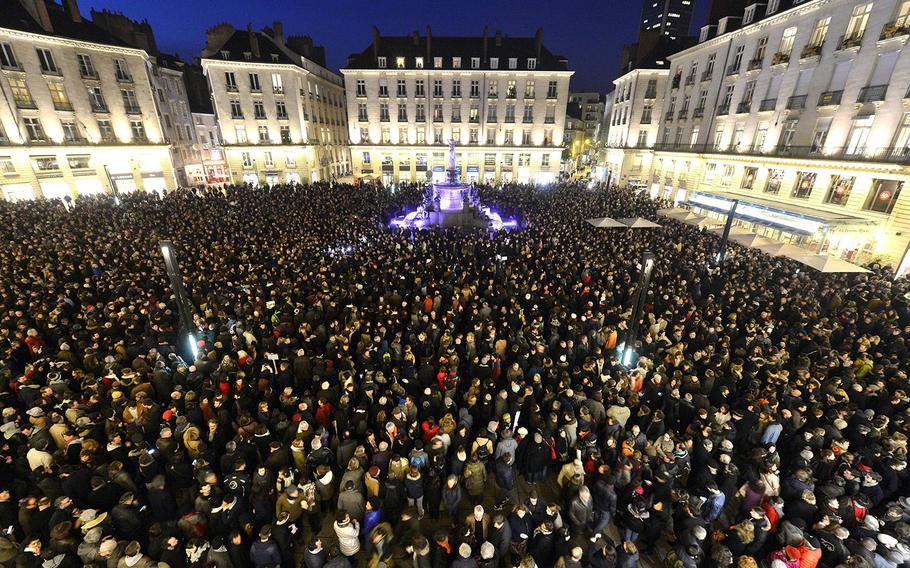 Thousands gather on Jan. 7, 2015, in a rally at the Place Royale in Nantes, France, to pay tribute to those injured and killed in an attack on the French satirical magazine Charlie Hebdo. (Franck Dubray, Zuma Press/TNS)

France’s anti-terrorism campaigns in North Africa and the Middle East, along with its strong secular traditions, have made it a tempting target for Muslim extremists such as those who carried out the deadly attack on a French satirical magazine — the bloodiest terror strike in the country in half a century.

“France is a target because we have sought to bring stability to (North Africa and the Middle East) by defeating the radicals that have caused such turmoil in those regions,” Robert Badinter, a former French justice minister, told Paris’ France Inter Radio on Thursday morning.

As of Thursday afternoon, French police were conducting a massive hunt for two brothers suspected of Wednesday’s raid on the offices of the magazine Charlie Hebdo. Twelve people — including the publication’s chief editor, several cartoonists and two police officers — were killed. The magazine, which was famous for poking fun at Islam, was firebombed three years ago in connection with a cartoon of the Prophet Mohammed.

In the aftermath of the bloodbath, police released the photos of two suspects, brothers Said and Cherif Kouachi, who had a history of recruiting jihadist fighters for the wars in Syria and Iraq, according to authorities. The brothers are French citizens of Algerian descent.

Wednesday’s attack in the heart of Paris was the deadliest in France since 1961, when right-wing militants opposed to France’s withdrawal from Algeria bombed a train, killing 28 people. In recent years, the nation has witnessed a string of smaller attacks by Islamist radicals.

Those attacks have coincided with Paris’ assertive role in fighting terrorist networks across North Africa and the Middle East during the past three years, including the current U.S.-led bombing campaign against Islamic State forces in Iraq and Syria, analysts say.

“While nothing could justify the appalling events in Paris, it remains a fact that three of a relatively small handful of Western states that have joined that campaign — Canada, Australia and now France — have experienced terrorist attacks in recent months,” said Nick Witney, former head of the European Defense Agency and a senior fellow at the Paris-based European Council on Foreign Affairs.

In December, a lone gunman with jihadist sympathies died along with two of his victims after a hostage-taking-and-siege in Sydney, Australia. And two Canadian soldiers died in separate attacks by Muslim radicals in Montreal and Ottawa, Canada, in October.

France, which has a long history of colonialism in Muslim areas of North Africa and Syria, has deployed considerable forces in the Middle East, Central Asia and Africa — sometimes acting alone and sometimes in coalitions with the U.S. and others — in an expanding campaign against Islamic radicals.

Paris contributed about 4,000 troops to the NATO’s 13-year mission in Afghanistan. A similar number, backed by tanks, helicopters and attack jets, were deployed two years ago to the African nation of Mali when it was in danger of being overrun by jihadists. That mission has now expanded to cover neighboring nations such as Niger and Chad.

The French air force was the first to join the U.S.-led effort against the Islamic State in Syria and Iraq, dispatching 15 Mirage and Rafale fighter-bombers to conduct bombing raids. French advisers are helping train Iraqi government forces to take on the militants. Reuters news agency has reported that the French navy now will join that campaign by sending the aircraft carrier Charles de Gaulle with its 30 attack jets to the area.

In response, the Islamic State has urged sympathizers in France to launch terrorist attacks at home. According to French news reports, there are currently nearly 1,000 French citizens fighting with the jihadists against the governments of Syria and Iraq. About 200 of these have returned home, bringing with them tactical infantry skills needed to conduct attacks.

Ed Blanche, a Beirut-based analyst and member of London’s International Institute for Strategic Studies, said: “Paris and other European governments … fear that many of the thousands of jihadists from their countries now fighting in Syria and Iraq will eventually return and carry their fight to Western Europe, where there’s a huge pool of potential recruits among the 19 million Muslims living in the EU, many of them marginalized, neglected, jobless and angry.”

One such returnee, Mehdi Nemmouche, is accused in the deadly shooting last May at Belgium’s Jewish Museum in which four people died. Prosecutors say he spent a year in Syria fighting with Islamic State forces and when arrested was carrying an AK-47 bearing the group’s insignia.

Photos and videos from the scene of Wednesday’s attack indicate that the gunmen were well-trained and experienced in the use of firearms and in small-unit infantry tactics.

”This raises the possibility that they had received training in using light arms (perhaps at a jihadist camp overseas) or had fought with jihadists overseas,” said a report released by STRATFOR, the Texas-based security-analysis firm.

France’s history of secularism — including strict separation of religion and state — dates from the French Revolution of 1789. It has contributed to tensions with the country’s Muslim immigrant community, which sees secularism as a threat to its own religious beliefs and values.

In a particularly significant episode in 2010, parliament enacted a law banning Muslim women from wearing the traditional burqas or hijabs, which cover their faces. The ban was criticized by many of France’s Muslims — including mainstream moderates — as a violation of freedom of expression.

For years, France has struggled to cope with its growing Muslim population, which at 5 million, is the largest in Europe.

A 2011 report commissioned by the French think tank, L’Institute Montaigne, found that Muslim immigrants were increasingly rejecting French values and instead immersing themselves in Islam, according an English translation of the report posted by the Gatestone Institute website. The report warned that Islamic Sharia law was rapidly displacing French civil laws in many parts of suburban Paris.

More than 40 percent of the Muslim youths in Paris suburbs are unemployed, causing many to turn to “deviant behaviors,” the report found.

On Thursday, an editorial in the Paris daily Les Echos called for the reaffirmation of the principles “on which the Republic was built.”

“We must reaffirm the principle of secularism, a founding value of the French identity, against which the Islamists have long waged a veritable crusade,” said the editorial.