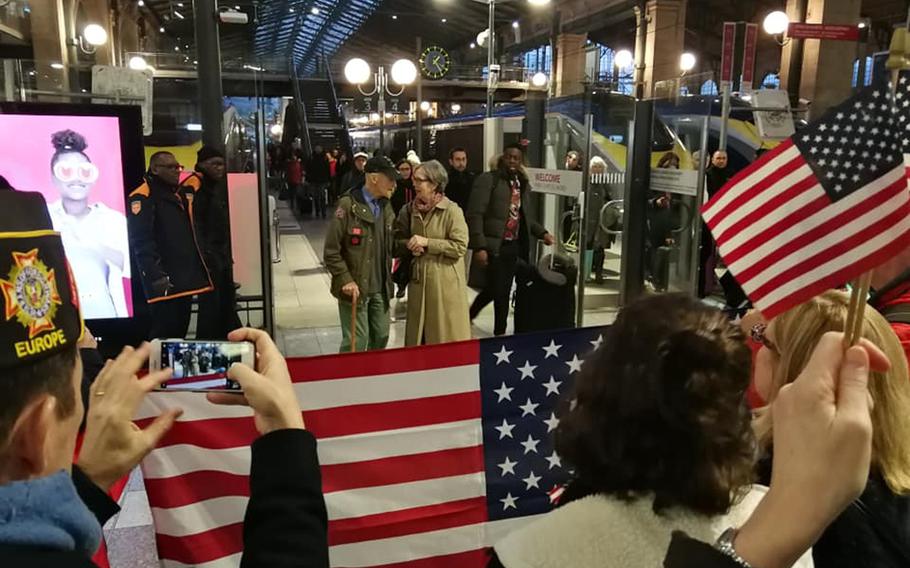 Stephen Weiss, an American World War II veteran who worked with the Office of Strategic Services behind enemy lines in France in 1944, is greeted by Meredith Wheeler, an American expatriate living in southern France, and other American well-wishers at Paris's Gare du Nord train station on Thursday, Feb. 13, 2020. (Cyril Pefaure)

Stephen Weiss, an American World War II veteran who worked with the Office of Strategic Services behind enemy lines in France in 1944, is greeted by Meredith Wheeler, an American expatriate living in southern France, and other American well-wishers at Paris's Gare du Nord train station on Thursday, Feb. 13, 2020. (Cyril Pefaure) 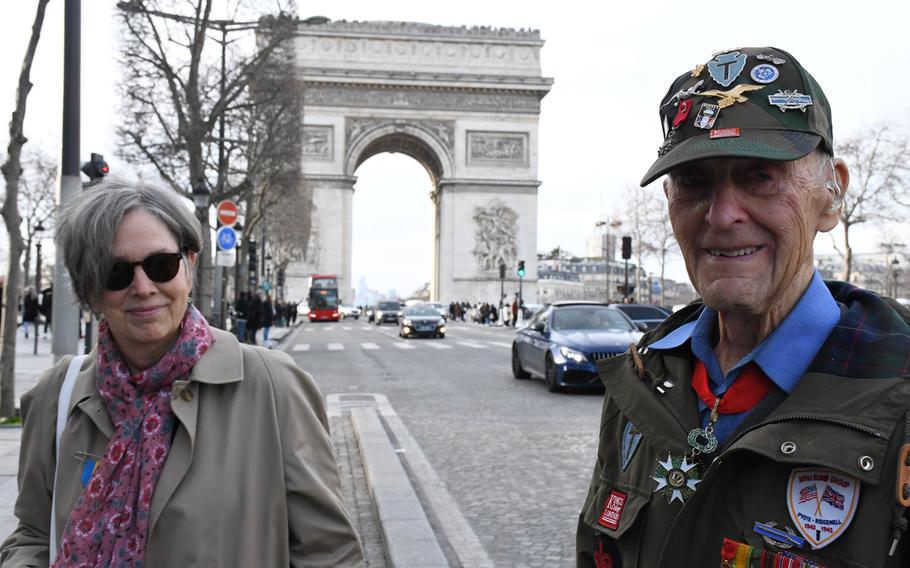 Buy Photo
American expatriate Meredith Wheeler and 94-year-old World War II veteran Stephen Weiss are pictured here near Paris's Arc de Triomphe ahead of a ceremony for the rekindling of the eternal flame at the Tomb of the Unknown Soldier under the famous French monument on Friday, Feb. 14, 2020. (Chad Garland/Stars and Stripes) 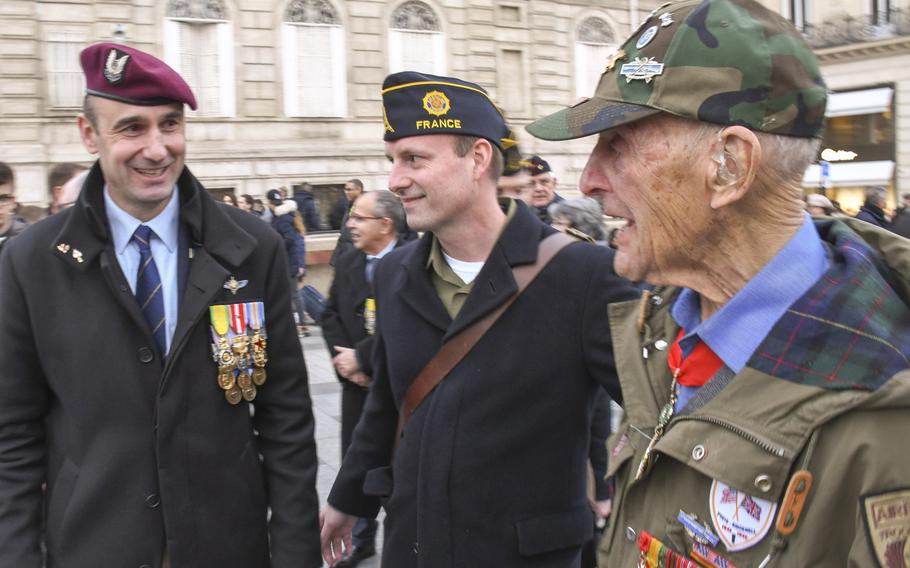 Buy Photo
Stephen Weiss, an American World War II veteran living in London, signs a commemorative book following a ceremony to rekindle the Eternal Flame at the Tomb of the Unknown Soldier under the Arc de Triomphe in Paris on Friday, Feb. 14, 2020. The ceremony honored the Office of Strategic Services, which Weiss, 94, had worked with behind enemy lines after being separated from his infantry unit during WWII. (Chad Garland/Stars and Stripes) 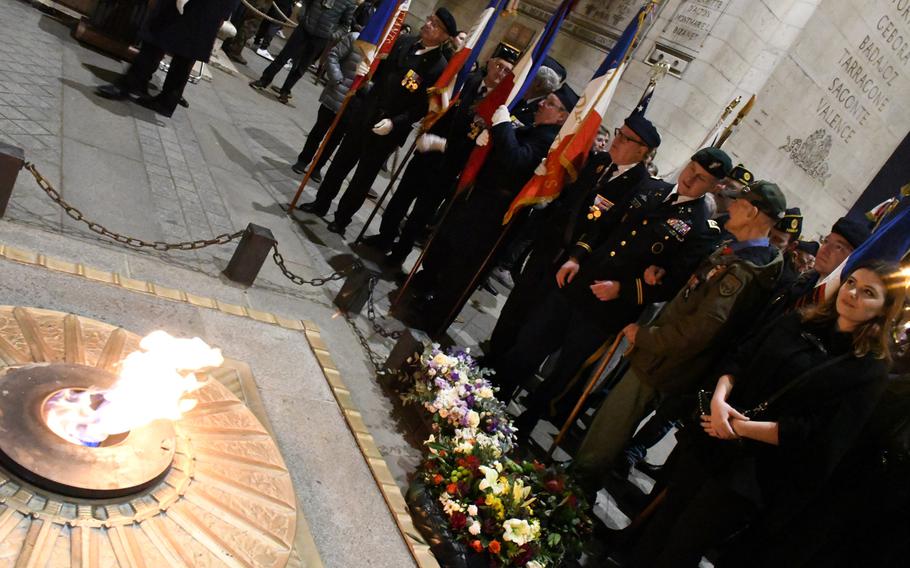 Buy Photo
Stephen Weiss, with a cane, speaks with Special Forces Lt. Col. Travis Moliere, following a ceremony to rekindle the Eternal Flame at Paris's Tomb of the Unknown Soldier under the Arc de Triomphe on Friday, Feb. 14, 2020. Weiss, 94, is a World War II veteran who had worked with the Office of Strategic Services, a precursor to Special Operations Command, conducting unconventional warfare behind Nazi lines in France during World War II. He and Moliere, along with Josephine Ligout, far right, a French-American high school student living in Chevy Chase, Md., laid a wreath at the tomb during the event. (Chad Garland/Stars and Stripes) 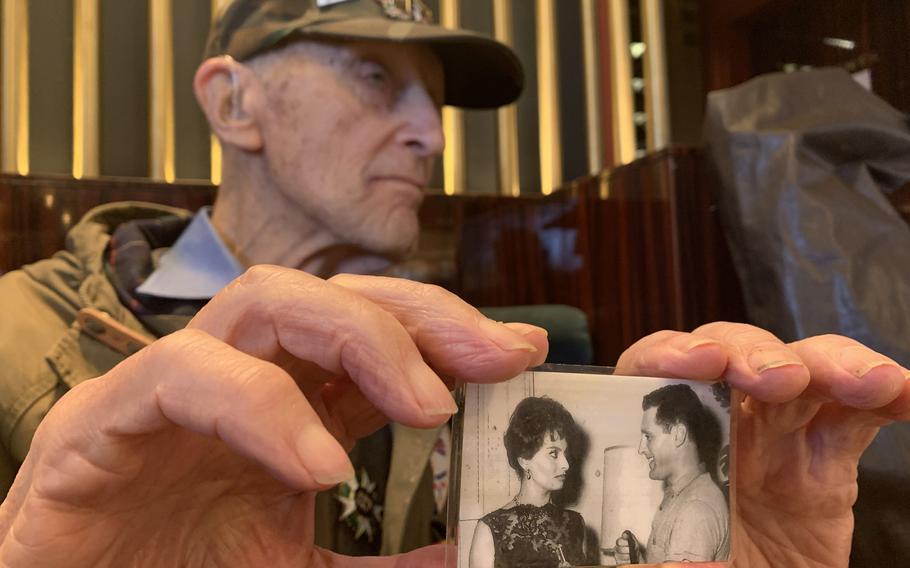 Buy Photo
In a Parisian cafe on Friday, Feb. 14, 2020, Stephen Weiss, 94, shows off a photo of himself with Italian actress Sophia Loren during his early post-World War II career in Hollywood. Weiss, a war and trauma researcher based in London, battled post-traumatic stress disorder after the war, but credits therapy with helping him turn his life around and lead three successful careers in his long life. (Chad Garland/Stars and Stripes) 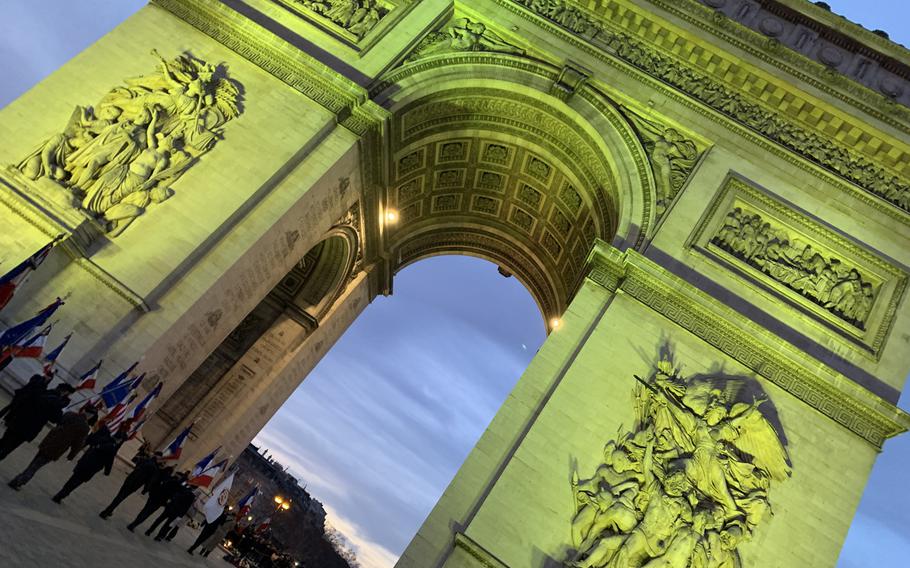 Buy Photo
A procession of American and French flag-bearers and veterans group representatives process up Paris's Champs-Elysee Avenue to the Arc de Triomphe on Friday, Feb. 14, 2020, during a ceremony honoring members of the Office of Strategic Services who helped liberate France durng World War II. An American Green Beret and a WWII veteran participated in the twilight rekindling of the Eternal Flame at the Tomb of the Unknown Soldier under the monument. (Chad Garland/Stars and Stripes) 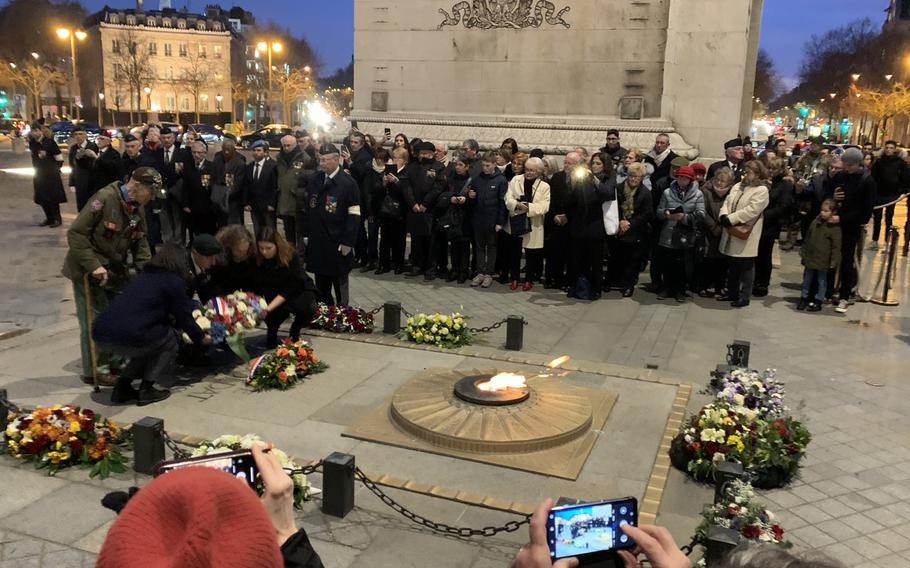 Buy Photo
Stephen Weiss, 94, standing on the left, helped lay a wreath at the Eternal Flame at the tomb of France's unknown soldier under the Arc de Triomphe on Friday, Feb. 14, 2020, along with, left to right, French-American high school student Margot Sarkozy, Special Forces Lt. Col. Travis Moliere, Beatrice Boussens, the grandaughter of an Italian-Jewish member of the Office of Strategic Services, and French-American high school student Josephine Ligout. Weiss is one of the few American World War II veterans alive who worked with the OSS behind enemy lines in France during the war. Sarkozy and Ligout had won national prizes from a French veterans organization. (Chad Garland/Stars and Stripes) 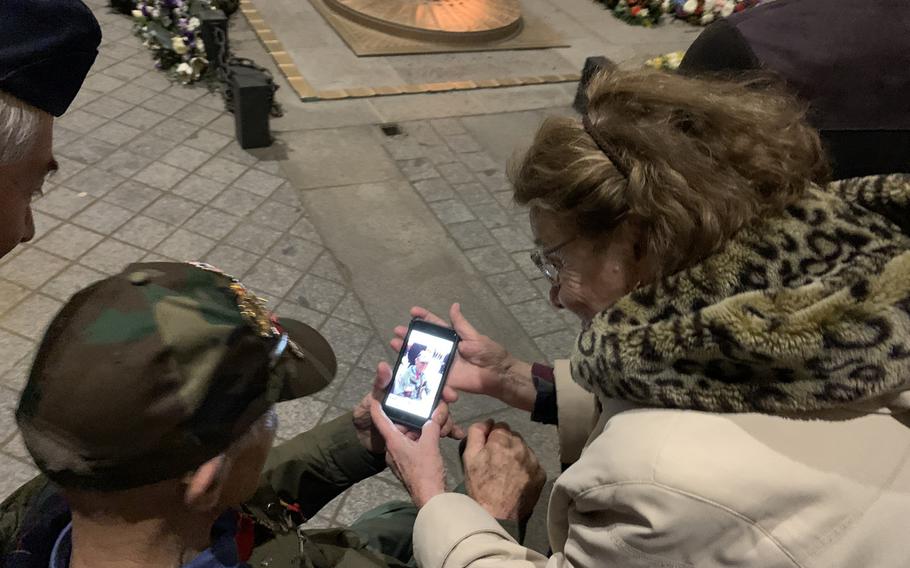 Buy Photo
A French woman shows American World War II veteran Stephen Weiss a photo she took of him at France's Tomb of the Unknown Soldier during a twilight ceremony under the Arc de Triomphe on Friday, Feb. 14, 2020. (Chad Garland/Stars and Stripes)

PARIS — The old soldier beamed as about 20 people waved American flags at Gare du Nord station, where he arrived in Paris to be honored as one of the few living veterans who fought with the super-secret forerunner of the CIA during the World War II liberation of France.

For Stephen Weiss, 94, the support he received Thursday and on other occasions late in his life has served as a reminder of his struggle to overcome what’s now known as post-traumatic stress disorder, which went unrecognized by his unit during the war.

After his arrival, Weiss, a member of France’s distinguished Legion of Honor, laid a wreath at the Tomb of the Unknown Soldier during a twilight ceremony at the Arc de Triomphe honoring members of the Office of Strategic Services, or OSS.

It was yet another remarkable chapter in the life of a teenager from Brooklyn who followed the call to defend his country, survived some of the fiercest combat of the war and then learned that battles don’t end when the shooting stops.

His story underscores not only the horrors of combat but the nation’s continuing challenges in both honoring and caring for the men and women whose sacrifice is incalculable.

'I volunteered to stay' Weiss served as a lead scout in the 36th Infantry Division during fighting in Italy before taking part in the invasion of southern France on Aug. 15, 1944.

Ten days after coming ashore on France’s Mediterranean coast, Weiss was reported missing in action after he and seven other soldiers were separated from their unit and surrounded by the Germans during a nighttime operation.

After hiding in an irrigation ditch, they dashed through a peach orchard and hid in a family’s hay loft, until the French Resistance organized their escape by disguising them as French police officers, then slipped them through Nazi lines and across the Rhone River in wooden boats.

“The Germans were this close,” Weiss said, motioning to about a foot away in the lobby of his Paris hotel. “We should have been caught.”

While behind German lines, the soldiers joined the underground briefly before teaming up with a small OSS operational group harassing Nazi forces in southern France, using guerrilla and special operations tactics.

“Once we did that and I discovered how they fought against the Germans ... I volunteered to stay,” he said of the OSS.

He spent several weeks with the outfit, whose leader was the father figure he’d longed for in the infantry. He cut telephone lines, guarded the OSS radio operator as Nazi tracking vans hunted illicit signals, helped destroy bridges and recovered nighttime supply drops.

“Here there was an altogether different method of fighting that appealed to me,” he said. “Hit-and-run, smash-and-grab.”

He stayed on even after the others from his unit returned, but despite the OSS group’s efforts to keep him, he was eventually ordered back to the division when commanders said they needed every possible infantryman.

He made his way hitching rides from Lyon to the Vosges mountain range near the German border, and reported for duty. That, he feels, was a mistake.

“I should have gone to the hospital,” he said.

Most of the infantrymen he knew had been killed, wounded or missing, he said, and none of the leaders seemed to care about signs of potential psychological trauma.

He trembled and couldn’t keep food down, but no one offered him a break or any kind of counseling.

Healing from trauma He went AWOL twice and returned both times after a few days of rest, turning himself in to the military police.

After he was court-martialed for desertion, he helped build stockades for a few months of a life sentence in confinement until a therapist came, interviewed him and told the Army it had made a mistake.

He soon returned to service, but as a veteran of two theaters he was spared from being sent to the Pacific after Germany surrendered. Instead he lived in a Paris apartment near the Arc de Triomphe while working as an Army photographer and traveling throughout liberated France until he was sent home and discharged.

But Weiss’ war wasn’t over.

He spent over a decade in therapy for what would later be called PTSD, a condition his father also suffered without treatment after being gassed in World War I.

Through psychoanalysis, Weiss learned to “cut the bullsh—” and live in the present, he said.

'Life owes me nothing' In a lesson learned in wars that were to come, Weiss found that the hardest part of treating PTSD was getting people to realize they need help and commit to getting it, he told Bryan Schell, commander of the local American Legion post, who’d served in the Navy in the 1990s and was among the Americans who greeted him in Paris.

Weiss later operated a psychotherapy practice in Beverly Hills for over two decades and still sometimes goes to counseling himself, because he’s “not interested in letting the past contribute” to his current mindset, he told Schell, offering to visit a post event to discuss the issue further with its members.

Still, Weiss is proud of the recognition he has received for his sacrifices and remains focused on continued service to fellow veterans.

As the two Americans and a few others sat in a café near the Arc de Triomphe, Weiss wore decorations he’d earned for his wartime exploits, including the French Resistance Medal, two Croix de Guerre and the U.S. Bronze Star. Around his neck he wore the Legion of Honor, France’s highest decoration for military and civilian merits, established by Napoleon Bonaparte.

In 1999, French President Jacques Chirac made him a knight, the first of the order’s five ranks. He’s been promoted twice since, earning the third-highest rank of commander in 2013, in part for his continued work on issues related to war and PTSD.

After getting his life back on track, Weiss went to work in Hollywood and raised three children with his wife of 23 years, accomplished ballet dancer and teacher Rosemary Valaire.

He earned two master’s degrees and, at age 69, was awarded a doctorate in war studies by King’s College London, where he’s been a lecturer for decades, often drawing on his combat experiences. He is a senior research fellow at the English university.

“I should never be where I am,” he said at the cafe, while sipping a chocolate shake like the ones from his boyhood in Brooklyn. “Life owes me nothing.”