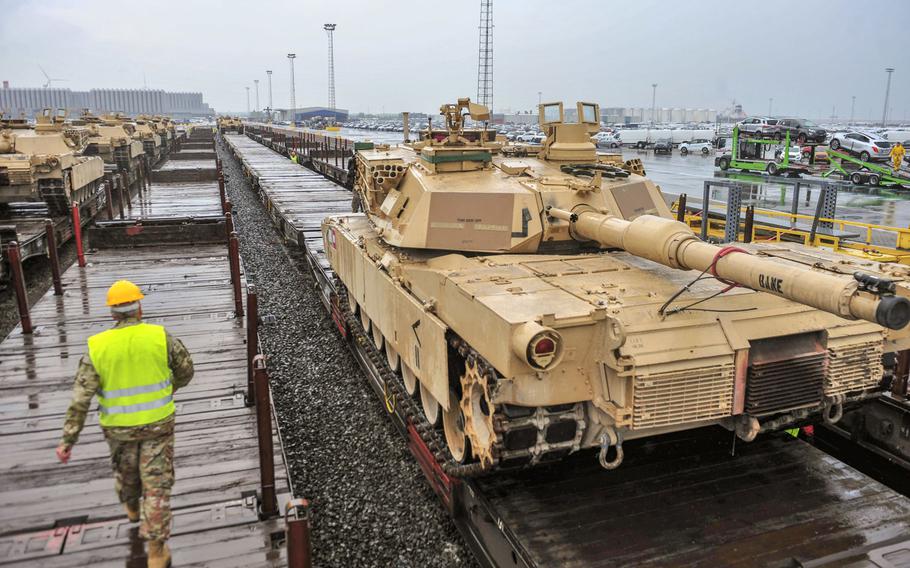 Tanks from 1st Armored Brigade Combat Team, 1st Cavalry Division are loaded onto train cars at the port of Antwerp, Belgium, in 2018 to be transported to Poland for Atlantic Resolve. Soldiers with the Fort Hood, Texas-based tank brigade are back in Europe for Atlantic Resolve, U.S. Army Europe said in a statement Oct. 28. 2020. (Jacob A. McDonald/U.S. Army)

Members of the 1st Armored Brigade Combat Team, 1st Cavalry Division will start arriving this week at military and commercial airports in Germany, Poland and Romania, USAREUR said in a statement Wednesday.

The unit’s gear will arrive by ship at the port of Antwerp in Belgium, where it will be sent to sites where the troops will operate.

The rotation marks the seventh time an armored brigade has come to Europe in support of the Atlantic Resolve campaign, launched in 2014 after Russia’s military intervention in Ukraine.

“These heel-to-toe deployments ensure U.S. Army forces maintain a consistent, combat-credible presence to deter aggression in the region,” USAREUR said in a statement. “The deployment of ready, combat-credible U.S. forces to Europe is evidence of the strong and unremitting U.S. commitment to NATO and Europe.”

The troops conducted a restriction of movement and were tested for the coronavirus before deploying, and will quarantine upon arrival in Europe to reduce the risk of transmitting the virus.

The tank brigade out of Fort Hood will replace the 2nd Armored Brigade Combat Team, 3rd Infantry Division, which also did a nine-month rotation.