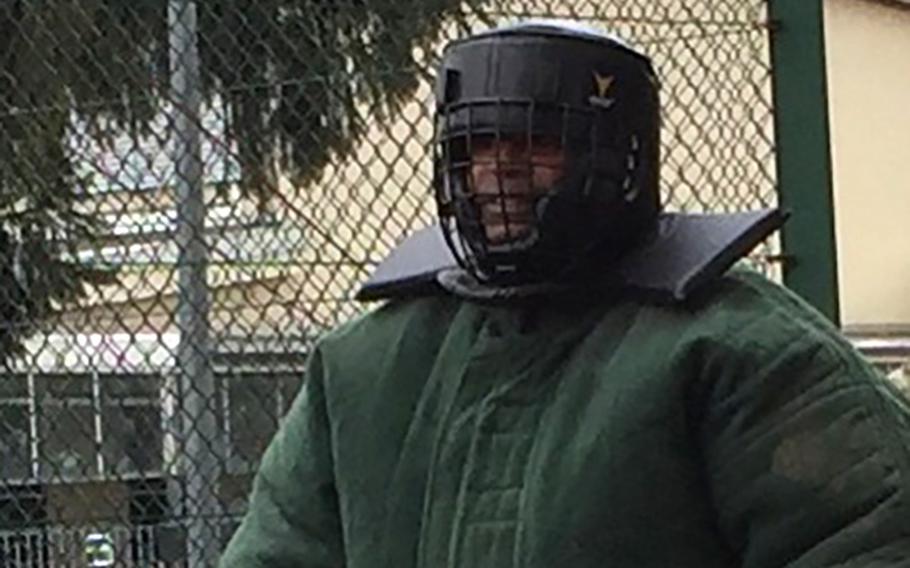 Then-Provost Marshal Maj. Jay Guerrero prepares to be tackled by a guard dog during an April 29, 2017, demonstration at Patch Barracks in Stuttgart, Germany. Guerrero was sentenced to prison on Friday, July 27, 2018, after he pleaded guilty to aggravated assault charges related to a 2017 incident in which he choked his wife during an argument. (Holly DeCarlo-White/Stuttgart Citizen)

KLEBER KASERNE, Germany — The former Director of Emergency Services for U.S. Army Garrison Stuttgart was sentenced to 18 months in prison Friday and was ordered to be dismissed from the Army for choking his wife during a fight in their home a year ago.

According to court testimony, on the morning of July 27, 2017, Guerrero and his wife got into an argument, one of many, that quickly became violent. During the fight, Guerrero grabbed Daisy Guerrero by the throat with his hands and choked her briefly. Later, he came up behind her, put her into a chokehold in the bend of his elbow and applied pressure on her neck until she blacked out and lost control of her bowels.

In a statement to the presiding judge, Col. Christopher Fredrikson, Daisy Guerrero said that during the attack, she could feel her life slipping away as she started to black out. Her son was in an adjoining room as she was being choked. The harder she fought, the worse things got until she was convinced she wouldn’t “make it out” of the assault. She testified that as she blacked out, she thought, “My God, what is going to happen to Jaden?” She came to, coughing for air, struggling to stand and covered in her excrement.

Jenifer Markowitz, a forensic nurse, testified that when someone loses control of their bladder when they are being choked, it is a sign “the brain is essentially shutting down” and death is near.

Jay Guerrero, who on his first deployment as an officer was awarded the Bronze Star with valor device for combat actions in Iraq, testified that he let his emotions go the day of the attack. He said he was trying to talk with her and she refused to let him kiss her, leaving him feeling rejected. A fight broke out and he couldn’t hold back. As his wife dabbed tears from her eyes in the court gallery, he described squeezing her neck until he “felt her legs going weak.”

Later, speaking directly to his wife in a broken voice, he took responsibility for the assault and asked for his wife’s forgiveness, and said, “I am deeply embarrassed and ashamed of my actions.”

Jay Guerrero faced a possible confinement of three years, total forfeiture of all pay and allowances and dismissal from the service. He was taken from the court building on Kleber Kaserne to the U.S. Army Regional Correctional Facility-Europe confinement center at Sembach Kaserne.