Petty Officer 1st Class Daniel Rainmaker, a crewmember aboard the guided missile destroyer USS Carney, is pictured on Sept. 23, 2015, wearing one of two flame-resistant coverall prototypes - the flight suit variant - being tested by crewmembers for the Navy. (Steven Beardsley/Stars and Stripes)

Petty Officer 1st Class Daniel Rainmaker, a crewmember aboard the guided missile destroyer USS Carney, is pictured on Sept. 23, 2015, wearing one of two flame-resistant coverall prototypes - the flight suit variant - being tested by crewmembers for the Navy. (Steven Beardsley/Stars and Stripes) 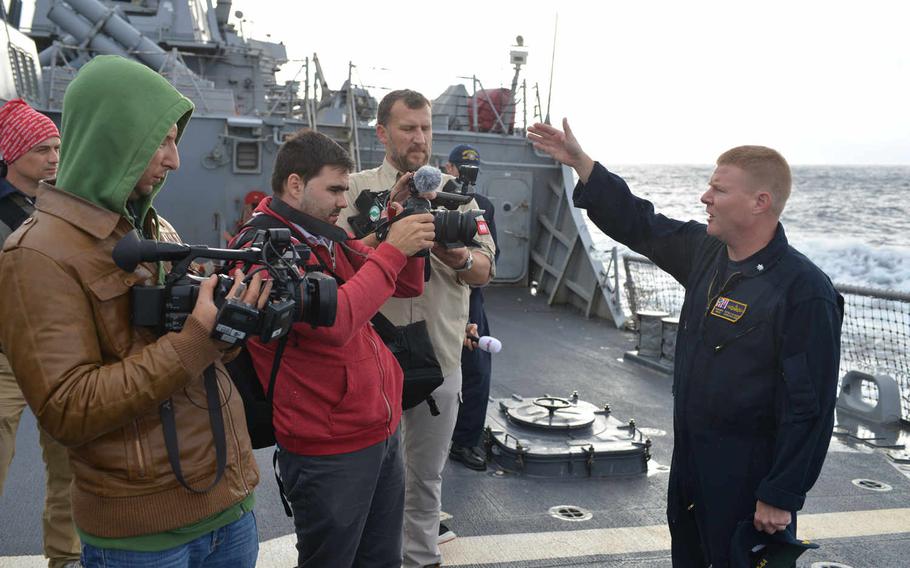 Cmdr. Peter Halversen, executive officer of the guided-missile destroyer USS Carney, speaks to media aboard the ship on Sept. 23, 2015. Halversen is wearing one of two flame-resistant coverall prototypes - the flight suit variant--being tested by Carney crewmembers for the Navy. (Steven Beardsley/Stars and Stripes) Cmdr. Ken Pickard, commanding officer of the guided-missile destroyer USS Carney, speaks to crewmembers in the mess hall Sept. 23, 2015. Pickard is wearing 'flyers coveralls,' 1 of 2 new flame-resistant sets of coveralls being tested by the Navy aboard the Carney. Several sailors behind Pickard can be seen wearing traditional utility coveralls. (Steven Beardsley/Stars and Stripes)

ABOARD THE USS CARNEY IN THE ATLANTIC OCEAN — Sorry, pilots, your flight suits may not be exclusive for much longer.

Crewmembers aboard this guided-missile destroyer are testing new flame-resistant “flyers coveralls” as part of a Navy trial of new working uniforms at sea. Although blue instead of green, they otherwise resemble the jumpsuits worn by aviators. As of last month, they were earning positive reviews.

“It’s convenient because I got so many pockets,” Petty Officer 2nd Class Richard Woodland said, eying the zippers across his chest, pants and back.

The Carney is the first of three ships performing a wear test of two new sets of coveralls for the service’s Fleet Forces Command in Norfolk, Va., an effort to find an alternative to the Navy’s much-maligned first-generation flame-resistant coverall.

Ushered into the fleet last year after the service discovered its patterned working uniforms were highly flammable, the coveralls, known as FRVs, proved to be duds themselves. The material wasn’t breathable, sailors complained. It shrunk in the wash, forcing sailors to constantly ask for new ones. And the material faded and wrinkled quickly over time.

“If you go out in the rain for 20 seconds in the old FRVs, you’re not going to be able to wear those things again for at least another day,” Carney’s Command Master Chief Jon Lonsdale said. “See how the (air conditioning) is here? And down in the berthing it’s like an icebox. They just don’t dry. Those kind of things in shipboard life can be problematic.”

Yet fires at sea are a constant concern for the Navy and its warship crews, who operate in tight spaces with high-pressure machinery, fuels and explosive ordnance on board.

More than half of the Carney’s crew is now testing the improved variants of the coveralls. Participants received two pairs each of the new styles, one a utility coverall that resembles the unisex first-generation coveralls, the other the flight suit, which comes in male and female versions.

Both are made from synthetic fiber blends instead of the chemically treated cotton of the first-generation coveralls. They weigh 10 percent less than their predecessors and protect against arc flashes hazards, a kind of electrical explosion, according to the Navy.

Carney crewmembers have already been surveyed on their initial impressions of the coveralls. They’ll offer additional thoughts midway through the wear test and again after the trial ends in March. The Carney began the test Sept. 8.

The Carney and its crew of roughly 300 arrived in its new home port of Rota, Spain, last month, the last of four Navy destroyers to serve as a rotating ballistic missile defense patrol in European waters. It will begin its first patrol in November.

Sailors aboard the amphibious assault ship USS Kearsarge and the attack submarine USS Newport News are also testing the new working uniforms, which are worn only at sea. The full trial is scheduled to end next summer. Navy clothing researchers will then analyze results and forward them to Navy leaders.

Lonsdale said his sailors were excited to be among the first to try the new coveralls. Early reviews on both variants have been positive, he said. Female sailors appreciate the separate sizing of the flight suit, he said, and the new utility coveralls continue to hold up.

“It’s comfortable,” Woodland said of the new coveralls. “From what I’ve seen with the washes, it’s not shrinking yet.”

Sailors also agreed on a few tweaks, mostly with the flight suit version. The leg pockets are too low, several said, and become awkward when one is seated, as pocketed objects rise to the kneecap. Another complaint was the number of shiny gold zippers on the suits. Lonsdale said he’d like them in a traditional black.