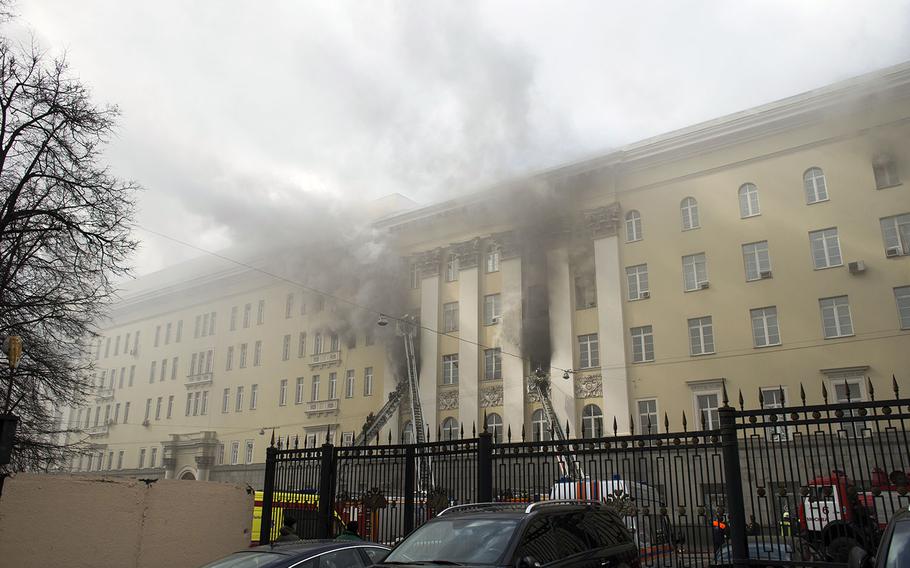 Firefighters work to put out a blaze at a building of Russian Defense Ministry in Moscow, Russia, Sunday, April 3, 2016. A building of the Russian Defense ministry is on fire in central Moscow with the fire brigade is on its way, the city’s law enforcement bodies told Russian news agency TASS on Sunday. (Ivan Sekretarev/AP)

MOSCOW — A massive fire raged at a former headquarters of the Russian Defense Ministry in Moscow on Sunday before it was brought under control several hours later.

Hundreds of firefighters and several cranes were seen battling the blaze Sunday afternoon after the fire broke out hours earlier.

Igor Denisov of the Emergency Situations Ministry in Moscow told Russian news agencies that firefighters "localized" the blaze, which had spread over 3,500 square meters (37,670 square feet) by the late afternoon. At least one firefighter was hospitalized.

The Defense Ministry moved to a new headquarters on the Moskva River in 2014 but still kept the old building near the Kremlin.

The ministry said the fire will not affect its core operations since the military departments have long moved to the new headquarters. It said the old building on Znamenka Street houses the departments in charge of procurement and services.

There were no immediate reports about the cause of the fire.