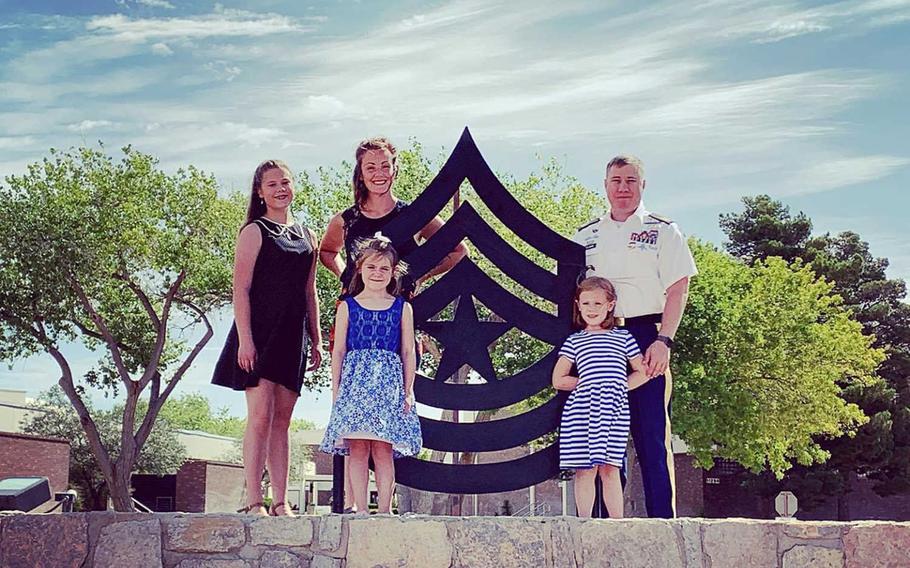 Sgt. Maj. Fred Tolman and wife Kelly pose with three of their four children at Fort Bliss, Texas, before recently heading to their posting with the 173rd Airborne Brigade in Vicenza, Italy. The family spent two weeks under quarantine, as all new arrivals must, and Kelly Tolman said she considered their family time together ''a blessing.'' (Tolman family)

VICENZA, Italy — The Tolmans arrived in Italy in August from Fort Bliss with their four children in tow, prepared with a jump rope and a suitcase full of board games.

Their quarantine, during which they barely stepped outside their three-bedroom house for two weeks, was a heavy helping of time together for a family often apart.

Sgt. Maj. Fred Tolman has deployed 17 times in his 18 years in the Army, the same number of years he’s been married to his wife, Kelly. He spent more than a year on an unaccompanied tour in South Korea, while the rest of the family stayed in Florida.

“Throughout Fred’s career he’s been gone a lot,” Kelly Tolman said. “So we really received this as a blessing.”

The Tolmans are among thousands of service members and their families arriving at new bases in Europe and spending up to two weeks in a barracks, designated housing or lodging under coronavirus quarantine rules.

More than 1,000 troops have arrived at U.S. Army Garrison Italy in the past few months, most of them assigned to the 173rd Airborne Brigade, brigade spokesman Maj. Chris Bradley said.

The quarantine has units waiting longer to fill manning gaps. But for many, the two weeks of downtime — instead of heading directly to inprocessing, formations, physical fitness runs and various other duties — has come as a welcome respite.

“It’s great! Like a two-week long restricted vacation, basically,” said Spc. Colette Rogers, who was in the middle of her 14-day quarantine this week in the barracks at Fort Riley, Kansas, after a rotation in South Korea. She was spending the time taking an online class and organizing her barracks room.

Lt. Joseph Barnhard came to Italy from Fort Benning in July and spent his quarantined days in a barracks room. He watched sports, read books, listened to podcasts and ran laps around a 1/12th of a mile perimeter. He found it “relaxing,” he said.

The brigade, which in the summer deployed and redeployed thousands of soldiers to Germany for war games without a single case of coronavirus, has worked to prepare incoming troops and families for the quarantining procedures.

“We were told (the procedures) ahead of time and were prepared really well for it,” Kelly Tolman said. She said they had also gotten used to restrictions from months of them at their base in Texas. For example, her children, ages 18, 15, 8 and 5, had all been sent home from school months before to continue their studies online.

But it was nice when, on the night the family arrived at their quarantine home, their sponsor was waiting for them. Plus, the kitchen was stocked with groceries, “which was awesome,” Kelly Tolman said.

Tolman said the teens spent much of the time in their rooms sleeping. The two youngest watched a movie every day with their parents, usually “Peter Rabbit” or “Frozen.”

They were told they could go outside in the backyard but were wary of doing so because it was shared with another family. “We could go outside and stretch and that was about it,” Kelly Tolman said.

Still, she said, the family had few tense moments. “With the excitement of getting over here, 14 days didn’t seem overwhelming once we hit the halfway point. Honestly, I feel like we were good.”montgomery.nancy@stripes.com Twitter: @montgomerynance