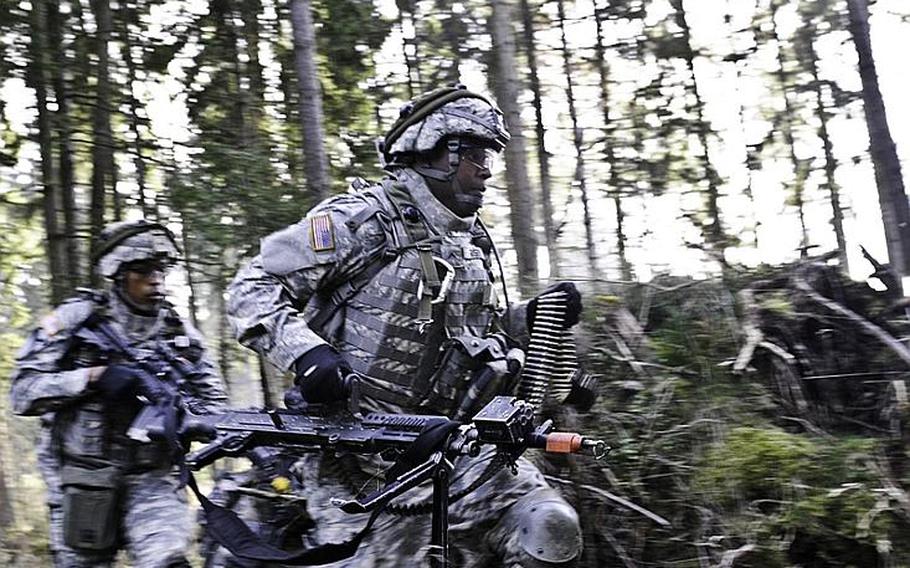 The four brigades were necessary for deterring aggression and adventurism. They were needed to be closer to current battlefields and to prepare for the next one by building capacity, trust and influence with our closest allies, he said.

It was the same thing a succession of four-star generals with European commands had gone on record saying for five years.

Lawmakers and foreign policy experts had for years discounted these arguments, seeking to remove most U.S. troops from Europe and Asia.

&ldquo;I understand Brussels is a very nice place. I&rsquo;m sure Germany is very nice,&rdquo; said Christopher Preble, director of foreign policy studies for the Cato Institute, a libertarian think tank. &ldquo;But [the generals] don&rsquo;t have a strategic rationale for being there, or not a good enough one.&rdquo;

But the generals&rsquo; arguments have carried the day, for now. Where once the withdrawal of two brigades was a certainty, just one brigade will be sent home, and not until 2015.

On April 8, the Defense Department announced that one of the Germany-based &ldquo;heavy&rdquo; brigades &mdash; currently the 170th Infantry Brigade Combat Team based in Baumholder and now in Afghanistan; and the 172nd IBCT based in Grafenw&ouml;hr and Schweinfurt and expected to deploy to Afghanistan this summer &mdash; would be withdrawn from Germany and returned to the United States. Which brigade would leave, and from what location remains unknown.

The Army also has the 2nd Stryker Cavalry Regiment in Vilseck, Germany, and the 173rd Airborne Brigade, with troops in Bamberg and Schweinfurt in Germany, and Vicenza, Italy.

The move would mean one-quarter of remaining U.S. combat soldiers, and one-half those with tanks and artillery &mdash; some 5,000 men &mdash; would be gone from Europe.

But perceptions of how significant varies.

&ldquo;I think it signals that the U.S. expects to maintain a large military presence in Europe for the foreseeable future. And I think that&rsquo;s unfortunate,&rdquo; Preble said. &ldquo;Don&rsquo;t get me wrong, I was a Cold Warrior. Those guys were big and bad and scary. But now there&rsquo;s no military rationale for having troops in Europe. None.&rdquo;

Guy Ben-Ari, deputy director of the Defense Industrial Initiatives Group at the Center for Strategic and International Studies, also said the brigade&rsquo;s removal sent an unfortunate message. But for the opposite reason.

&ldquo;It&rsquo;s an indication that the U.S. is not stepping up to provide any leadership and coordination,&rdquo; Ben-Ari said. &ldquo;In fact, it&rsquo;s stepping away.&rdquo;

Moving the brigade would weaken the NATO alliance, said St&aring;le Ulriksen, chair of the Security and Conflict Management Department at the Norwegian Institute of International Affairs in Oslo. Norway, for instance, went to Afghanistan, like the other European nations, &ldquo;to show solidarity and to stay on the good side of the U.S. &mdash; to be an ally,&rdquo; he said.

Ulriksen said that &ldquo;free-riding&rdquo; on the U.S. had enabled Europeans to avoid devising their own coordinated defense structures and that they should &ldquo;grow up and take responsibility.&rdquo;

But he also said a European alliance was hard to imagine without the U.S. as leader.

&ldquo;It&rsquo;s a kind of a comfortable situation. You have a leader no one disputes,&rdquo; he said. &ldquo;What would be the alternative &mdash; the British? The French? The Germans?&rdquo;

U.S. forces&rsquo; positioning is complex, having to do with international relations, questions of national identity, and huge amounts of money, he said. &ldquo;And it&rsquo;s political, of course, very, very political.&rdquo;

The removal of one brigade appears to be a compromise.

Army transformation that began in 2003 under the Bush administration and a military re-basing decision planned to return two brigades, and pare what were 62,000 soldiers in Europe to 24,000. But the moves stalled in 2007, as combat deployments continued. Instead of drawing down, Army troop strength went up.

Now it&rsquo;s going down again, as the Pentagon looks to cut costs and respond to a worldwide recession, a national debate about debt reduction and increased congressional scrutiny.

&ldquo;NATO was a wonderful concept. But 61 years later, I think it&rsquo;s time to say our Western European allies should be on their own. We&rsquo;ll cooperate with them, but we shouldn&rsquo;t be subsidizing their defense,&rdquo; Frank said.

In the Senate, Sen. Kay Bailey Hutchison, R-Texas, whose state stands to gain troops at Fort Bliss in the restructuring, was advocating similarly.

&ldquo;For the future security posture of U.S. military forces and for the fiscal health of our nation, [the] military construction agenda should be guided by these words: build in America,&rdquo; she wrote in Politico last year. &ldquo;Some argue that the U.S. overseas presence provides assurance to our allies and deterrence to our adversaries. History has proven otherwise.&rdquo;

Hutchison cited Russia&rsquo;s 2008 invasion of Georgia to make her point &mdash; just as military leaders have cited the invasion to make their point that the region still has stability problems.

Which brigade would leave and which location shut down, if decided, has not been revealed. Baumholder was added in 2008 to the Defense Department list of &ldquo;enduring&rdquo; sites to continue hosting U.S. troops, and remains on that list, USAREUR said. Grafenw&ouml;hr is also listed as enduring. How easy it is to take a location off the list is unclear.

Schweinfurt has never been on the list and previously has been identified for closure. But there&rsquo;s been no announcement of its closing.

The return of the brigade is scheduled for 2015 &mdash; four years and many possible political and security-environment changes away. This leads some to believe, as one USAREUR officer who declined to be identified put it: &ldquo;It&rsquo;s all a ruse. They&rsquo;re just kicking the can down the road.&rdquo;

Col. Greg Julian, a spokesman for Stavridis, declined to address the can-kicking question. But he did say that Stavridis&rsquo; views haven&rsquo;t changed.

&ldquo;All that is still true as far as partnering and training and deterrence,&rdquo; Julian said. &ldquo;But with the current state of the economy, people have to get realistic. Decisions were made, and that&rsquo;s what we&rsquo;re going with.&rdquo;