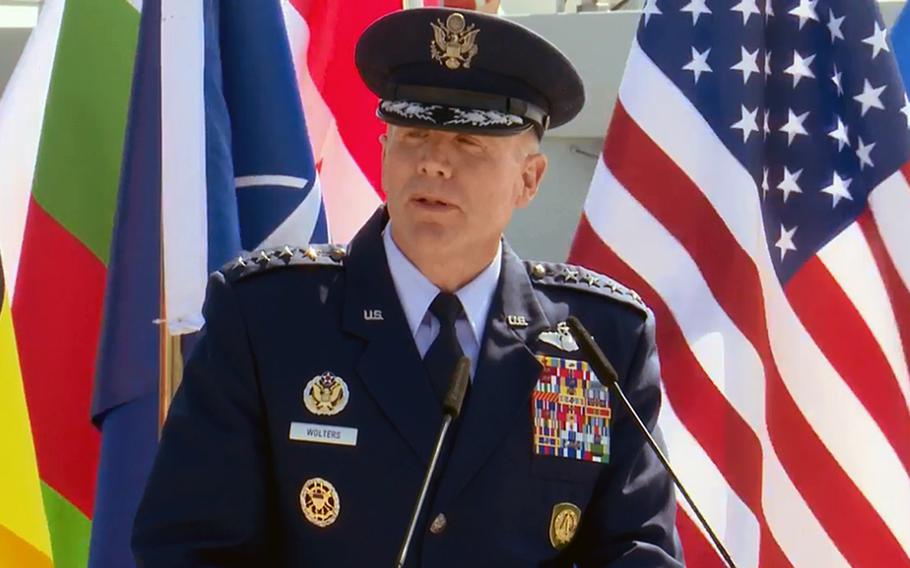 Gen. Tod Wolters, commander of U.S. European Command, speaks at the Defender-Europe 21 opening ceremony in Durres, Albania, May 4, 2021. About 28,000 troops from 26 countries are taking part in the exercise. (Twitter/U.S. Army Europe)

Gen. Tod Wolters, commander of U.S. European Command, speaks at the Defender-Europe 21 opening ceremony in Durres, Albania, May 4, 2021. About 28,000 troops from 26 countries are taking part in the exercise. (Twitter/U.S. Army Europe) 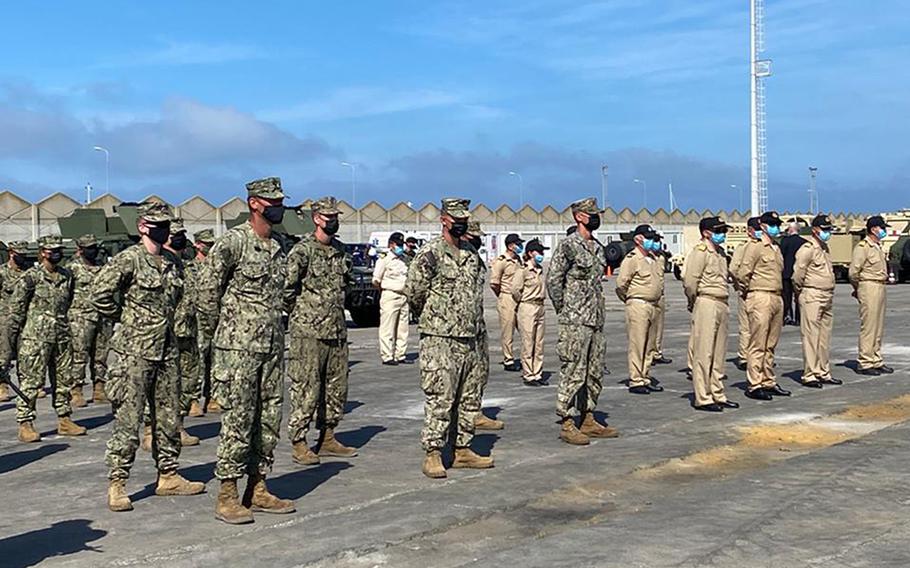 Service members stand in formation at the Defender-Europe 21 opening ceremony in Durres, Albania, May 4, 2021. About 28,000 troops are taking part in the exercise in various countries in central, southern and Eastern Europe, and northern Africa. (Twitter/U.S. Army Europe) 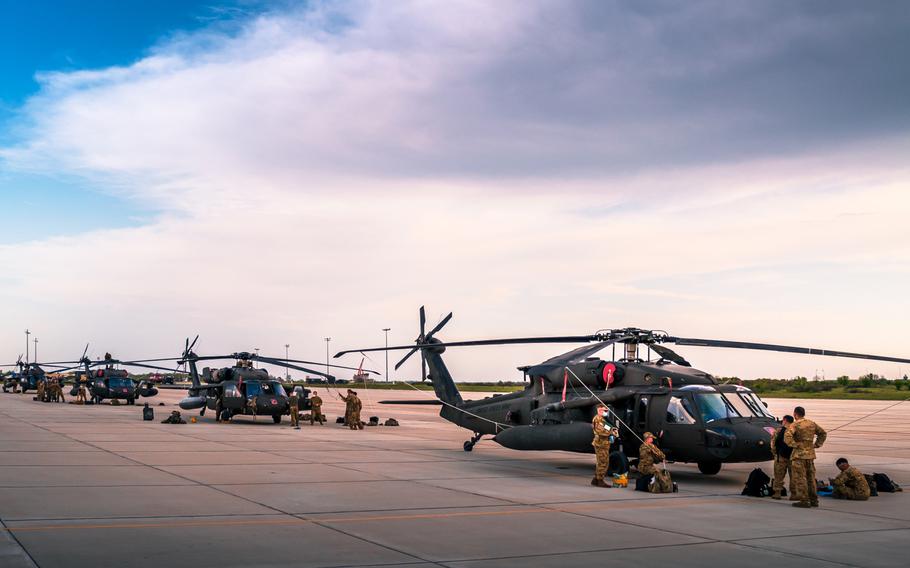 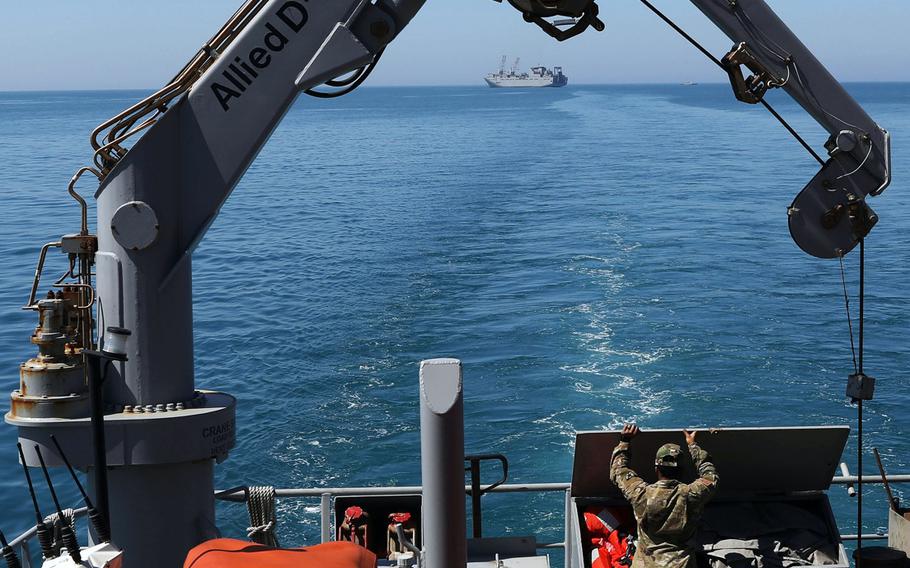 A U.S. soldier from the 259th Transportation Battalion works on the deck of the U.S. Army Logistics Support Vessel MG Charles P. Gross, with the USNS Bob Hope seen in the background April 26, 2021, near the coast of Durres, Albania, as they prepare for exercise Defender-Europe 21. (Elizabeth O. Bryson/U.S. Army)

STUTTGART, Germany — The U.S. kicked off one of the largest allied military drills in Europe in decades Tuesday with amphibious maneuvers in the Adriatic Sea that harkened in “scope and scale” to the beach landings of World War II, the top American commander said Tuesday.

“The task is daunting in what we are attempting to do,” U.S. European Command’s Tod Wolters said during a ceremony in Albania that marked the start of the U.S. Army-led Defender Europe-21 exercise series.

From the Baltic in northeastern Europe, to the Black Sea, Mediterranean and northern Africa, some 28,000 U.S. and partner forces are taking part in drills connected to the U.S. Army Europe and Africa-led exercise. It’s the second year that the Army has held the large-scale drill, which was cut short in 2020 because of the coronavirus pandemic.

This year, military officials put in place measures aimed at curtailing the spread of the virus.

At Albania’s port of Durres on Tuesday, about 1,000 troops transferred Army combat gear from the USNS Bob Hope transport ship onto smaller vessels. From there, the ships took vehicles and equipment to other Adriatic ports to join up with troops for maneuvers.

“What we are attempting to do is improve our strategic transparency and alignment, something that hasn’t been done with this scope and scale since the 1940s,” Wolters said.

Wolters, who was speaking at a ceremony attended by other U.S. generals and Albanian officials, said seeing all the pieces assembled for the ship-to-shore maneuvers conjured images of WWII.

“As we stand here on this tarmac and look at this shoreline we can’t help but remember what took place in World War II — the Sicily landings, D-Day, the Normandy invasion,” Wolters said.

Concerned about a more aggressive Russia, the Defender Europe concept is the result of a push by the Army to bring back the kind of complicated troop movements that were routine during the Cold War.

A focus of the training is to test the ability of the U.S. and allies to move large numbers of troops and equipment across long distances to confront an enemy force. The 82nd Airborne Division will parachute into Baltic states to showcase quick response capabilities while Army artillery units will fan out from the Arctic to northern Africa to use modernized long-range precision rockets.

“From towed artillery to long-range rocket systems, U.S. Army Europe and Africa has the organic ability to rapidly deliver precision fires to support our joint force and NATO allies anywhere in Europe and Africa,” Brig. Gen. Christopher Norrie, commander of the Grafenwoehr-based 7th Army Training Command, said in a statement as the events got underway.