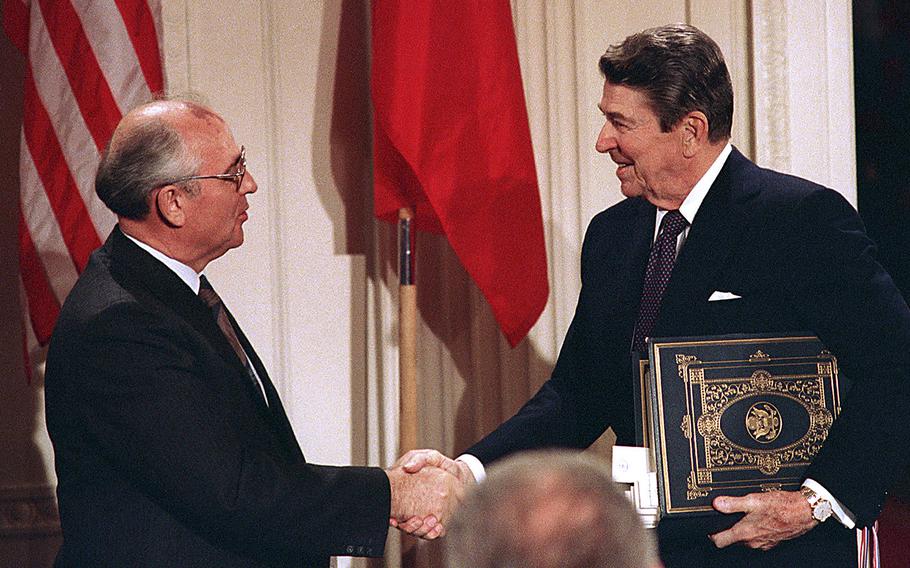 In this Dec. 8, 1987, file photo, President Ronald Reagan, right, shakes hands with Soviet leader Mikhail Gorbachev after the two leaders signed the Intermediate Range Nuclear Forces Treaty to eliminate intermediate-range missiles during a ceremony in the White House East Room in Washington. The U.S. and Russia both walked away from the landmark deal on Friday, Aug. 2, 2019. (Bob Daugherty/AP)

In this Dec. 8, 1987, file photo, President Ronald Reagan, right, shakes hands with Soviet leader Mikhail Gorbachev after the two leaders signed the Intermediate Range Nuclear Forces Treaty to eliminate intermediate-range missiles during a ceremony in the White House East Room in Washington. The U.S. and Russia both walked away from the landmark deal on Friday, Aug. 2, 2019. (Bob Daugherty/AP) 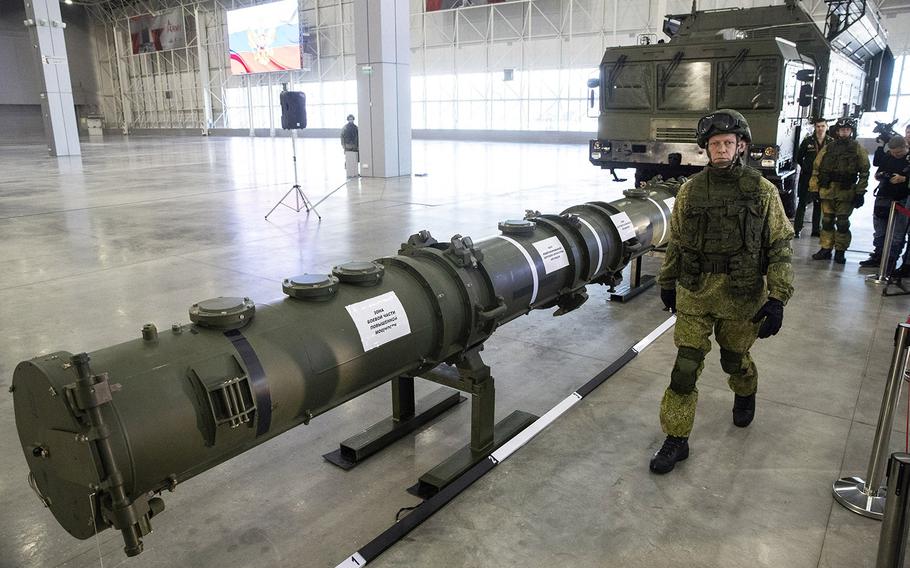 This Jan. 23, 2019 file photo, shows the 9M729 land-based cruise missile in Kubinka outside Moscow, Russia. Washington and Moscow walked out of the Intermediate-range Nuclear Forces treaty that President Ronald Reagan and Soviet leader Mikhail Gorbachev signed in 1987, raising fears of a new arms race. The U.S. blamed Moscow for the death of the treaty. (Pavel Golovkin/AP)

WASHINGTON – Defense Secretary Mark Esper on Friday announced the official withdrawal of the United States from a key nuclear missile treaty with Russia, blaming Moscow for violating the terms of the 1987 pact and vowing to build new weapons previously banned under the agreement.

“This withdrawal is a direct result of Russia's sustained and repeated violations of the treaty over many years and multiple presidential administrations,” Esper said in a statement emailed to reporters Friday. “… The United States will not remain a party to a treaty while Russia is in deliberate violation.”

The expected move, kick-started by President Donald Trump’s administration about six months ago, formally ends the Intermediate-Range Nuclear Forces Treaty signed by Russia and the United States at the end of the Cold War with the intention of limiting future arms races between the two powers.

Another major arms agreement between the two countries, the larger New START treaty, is set to expire in 2021 and has faced American criticism recently. The potential for its end leaves uncertainty over what limits, if any, will be left on the U.S. and Russian nuclear arsenals after decades of accords.

In Esper’s statement Friday, he said Moscow “is producing and fielding an offensive capability that was prohibited by the INF Treaty,” referencing Russia’s SSC-8 ground cruise missile, which has a range that can rapidly reach most of Western Europe.

Esper said with the INF Treaty lifted, the United States would “fully pursue” a similar weapon. The Pentagon began preliminary research and design on such a missile in 2017, citing Russia’s noncompliance with the treaty.

He vowed to work with American allies to counter Russian actions, such as the deployment of the SSC-8. NATO on Friday endorsed the U.S. decision.

NATO will respond “in a measured and responsible way” to security challenges posed by Russia’s new cruise missiles, the alliance said Friday, following the demise of the INF Treaty, a cornerstone of European security for the past three decades.

“Russia today remains in violation of the INF treaty, despite years of U.S. and Allied engagement, including a final opportunity over six months to honor its treaty obligations,” a statement from the North Atlantic Council, NATO’s top policy body, said Friday. “A situation whereby the United States fully abides by the treaty, and Russia does not, is not sustainable.”

Moscow denies the missile falls outside the limitations of the treaty signed by President Ronald Reagan and Soviet leader Mikhail Gorbachev, which prohibits the two countries from possessing missiles with ranges of 300 to 3,400 miles.

“We regret that Russia has showed no willingness ... to comply with its international obligations,” NATO Secretary-General Jens Stoltenberg said Friday. Russia’s new intermediate-range weapons “can reach European cities within minutes, they are mobile, hard to detect and they also reduce the threshold of any potential use of nuclear weapons in armed conflict.”

He has said NATO would maintain a credible deterrent, including the alliance’s nuclear weapons, but without mirroring what Moscow was doing.

“We don’t want a new arms race. That’s the reason we will respond in a responsible and measured way,” Stoltenberg told reporters in Brussels. NATO would look into air and missile defense, better intelligence, exercises and other conventional options, and new initiatives on arms control, he said.

The U.S. Air Force National Air and Space Intelligence Center said the SSC-8, also known as the 9M729, has a maximum range of about 1,550 miles.

Concerns about its range first surfaced in 2015, when Russian warships in the Caspian Sea fired a salvo of the naval version of the cruise missile at targets in Syria, nearly 1,000 miles away.

Russia also has complained for years about the treaty, pointing out that after most Eastern European nations joined NATO in the 1990s, alliance forces could reach the Russian heartland without medium-range weapons.

With the collapse of the INF treaty, U.N. Secretary-General Antonio Guterres warned Thursday of the consequences.

“The world will lose an invaluable brake on nuclear war,” he told reporters in New York. “This will likely heighten, not reduce, the threat posed by ballistic missiles.”

Meanwhile, Trump hasn’t committed to extending or replacing New START, which imposed limits starting in 2018 on the number of U.S. and Russian long-range nuclear warheads and launchers, The Associated Press reported.

Trump has called New START “just another bad deal” made by former President Barack Obama’s administration. Trump’s national security adviser, John Bolton, said in June that it’s unlikely the administration will agree to extend the treaty for five years, which could be done without legislative action in either capital, the AP reported.

Trump has raised the idea of a trilateral deal that would include China.