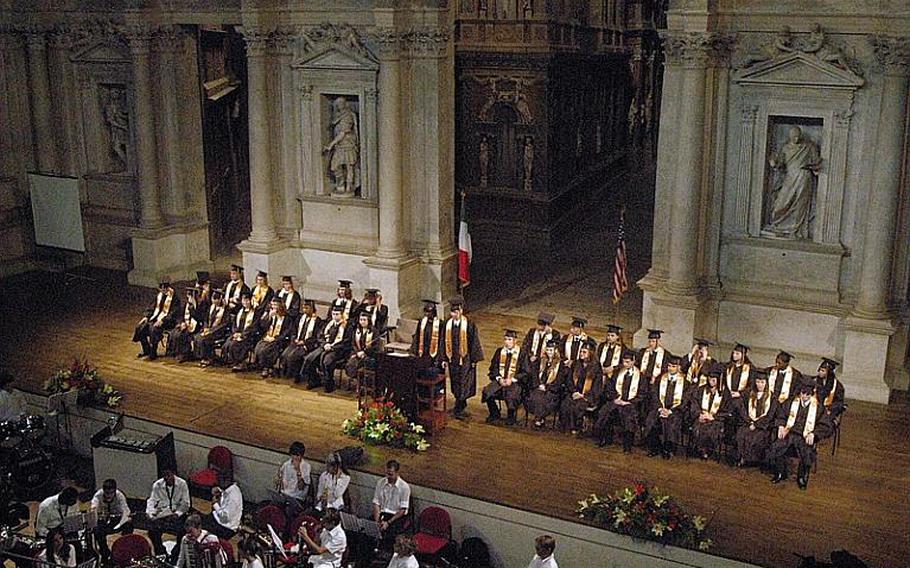 Buy Photo
A Vicenza High School graduating class sits on the stage in the Teatro Olimpico, the oldest indoor amphitheater in the world, during a 2007 graduation ceremony. Vicenza is among the Department of Defense Dependents Schools high schools in Europe who hold ceremonies off base in historic settings. (Kent Harris/Stars and Stripes)

AVIANO AIR BASE, Italy -- Thousands of high school seniors attending the U.S. military school system in Europe will have to work a little harder &mdash; outside the classroom &mdash; if they want to attend off-base graduation ceremonies next year.

Starting with the 2011-2012 school year, the Department of Defense Dependents Schools Europe and its five districts will no longer foot the bill for individual school graduation ceremonies, officials said. Instead, students or local base organizations will need to raise funds to pay for the costs of holding the events, many of which cost thousands of dollars.

&ldquo;For many schools, it doesn&rsquo;t make a difference, because they had already been raising the money themselves,&rdquo; said Frank Roehl, superintendent of the Heidelberg District.

But others hadn&rsquo;t. DODDS Europe or its districts have been spending at least $50,000 to fund off-site graduations in recent years, according to Bob Purtiman, DODDS Europe public affairs officer.

While the organization is continually trying to monitor its spending, the issue is more than just financial, Roehl said.

&ldquo;I think it&rsquo;s an equity issue, too,&rdquo; he said. &ldquo;Some schools were funded and some were not.&rdquo;

That&rsquo;s mostly because of long-standing traditions at some schools. While some schools hold their ceremonies at facilities on base &mdash; at little or no cost &mdash; others have traditionally rented space at historical venues in surrounding communities.

Sometimes, that&rsquo;s because there&rsquo;s not much choice. Roehl said there isn&rsquo;t a base facility big enough to host Heidelberg High&rsquo;s graduation, other than the football field. The school used to hold its ceremonies at the city&rsquo;s castle, but has been holding it more recently at the Stadthalle events center. Renting that costs at least $8,000, he said.

Students in Vicenza, Italy, have been receiving diplomas for years at the famed Teatro Olimpico, designed by 16th-century architect Andrea Palladio, in downtown Vicenza.

About 90 miles away, students at Aviano traditionally wear their caps and gowns at Teatro Zancanaro in nearby Sacile.

&ldquo;It&rsquo;s not really a problem for us,&rdquo; principal Christine Echevarria said. &ldquo;We only pay about $1,000. Our graduation is very cheap in comparison to some schools.&rdquo;

Echevarria said base organizations often help pay for such events and she doesn&rsquo;t think students will object to raising some money on their own either. Graduating classes often decide to leave any money they&rsquo;ve raised for the next class, she said.

With 57 projected graduates, Aviano might be able to find space on base to hold a ceremony, Echevarria said.

&ldquo;But we prefer to have it outside [the gates]. At somewhere nicer,&rdquo; she said.