'Disturbed' man claiming to have explosives, caught after car chase on autobahn 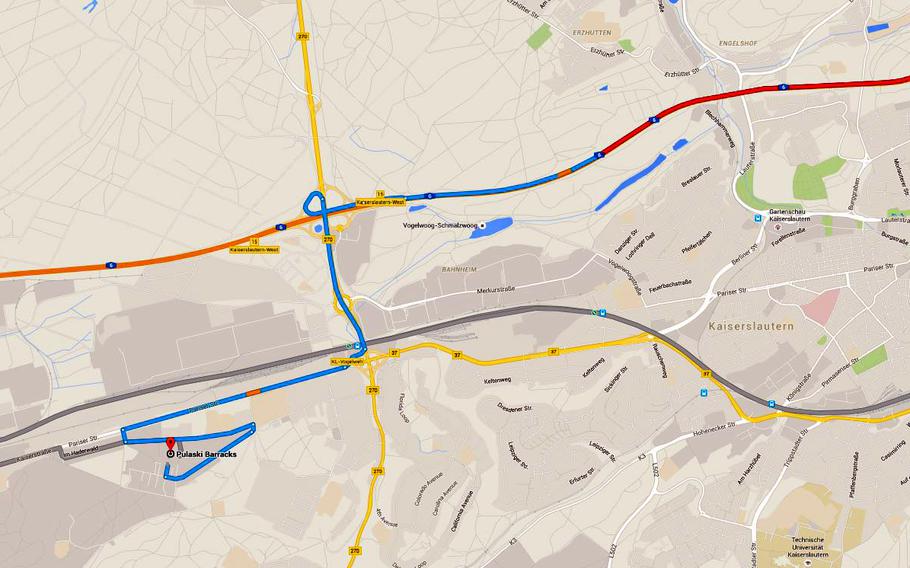 A Google map shows Pulaski Barracks at left and one route to the A6 autobahn where a car chase Saturday, March 19, 2016, ended in a crash and the arrest of a man who told security personnel at Pulaski that he had explosives in his vehicle. (Google)

KAISERSLAUTERN, Germany — A German man who drove up to the U.S. Army installation Pulaski Barracks Saturday morning and told gate guards he had explosives led American and German police on a wild car chase on the A6 Autobahn, which was subsequently closed in both directions.

The chase began shortly after 8 a.m. when the man, a 61-year-old from Bad Durkheim, drove up to the Pulaski Barracks gate – by McDonald’s – and told security guards that he had explosives in his car, German police and U.S. officials said.

The man then fled onto the A6 toward Mannheim with American and German police in pursuit. The chase ended when the man crashed his VW Polo into a police car between the Kaiserslautern-West and Kaiserslautern-Centrum junctions in the construction zone, German police said in a statement.

No one was injured but the police car was totaled. Experts who searched the car found no explosives. The man appeared to be mentally disturbed, according to German police, and he was to be hospitalized for psychiatric treatment.

The German police statement said the man had entered the base Friday around midnight but left before he could be stopped. Security personnel at the gate were thus keeping a watch out for the man on Saturday, German police said.

Jonathan Riley, a spokesman for U.S. Army Garrison Rheinland-Pfalz, confirmed there was a security incident at Pulaski Barracks Saturday. He said the incident is under investigation. Pulaski Barracks remains open, he said, but the exit lane of the main gate remained closed as of early Saturday afternoon.

The Autobahn was closed for more than two hours and traffic was diverted through Kaiserslautern leading to traffic backups throughout the city.