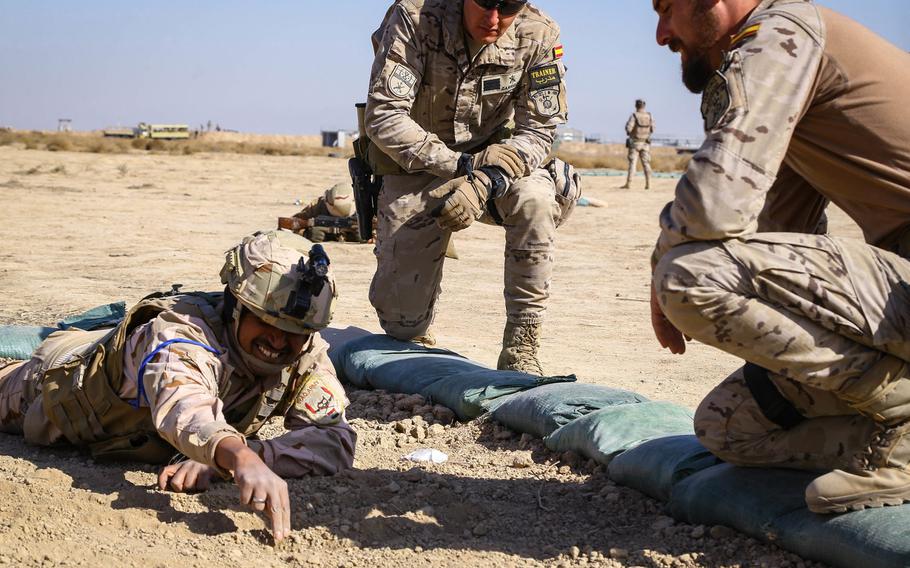 NATO soldiers from Spain watch an Iraqi soldier as they go over techniques to detect roadside bombs at the Besmaya Range Complex, Iraq, Feb. 8, 2018. NATO on Wednesday will agree to begin planning for a new training mission in Iraq. (Antonio Lewis/U.S. Army)

NATO will plan for a new training mission in Iraq, which comes after a request for more alliance support from the Iraqi government and the U.S.-led coalition fighting there.

“This will put our presence (in Iraq) on a firmer footing,” NATO Secretary-General Jens Stoltenberg said at a defense ministerial meeting in Brussels on Wednesday.

The aim is to launch the mission in July.

Last year, NATO formally joined the U.S.-led coalition battling the Islamic State group, but the move was largely symbolic and followed intense pressure from the Trump administration for allies to do more in the counterterrorism fight.

The newly announced effort will allow NATO to tap into the alliance for generating procedures and funding, Stoltenberg said.

Allies have not said how many troops will be needed for the expanded training mission, and it is unclear how many of the alliance’s 29 members will be eager to venture deeper into Iraq.

There are no plans for a NATO-led combat role in Iraq, where ISIS has been forced out of all its former strongholds.

The new mission will allow for a larger, more coordinated effort to build Iraqi defense institutions and add support in tactical areas, such as countering roadside bombs, Stoltenberg said.

“This will help make Iraq safer. And us more secure,” Stoltenberg said.

NATO operated a small training mission in Iraq from 2004 until 2011, when its 130 personnel were withdrawn after disagreement with Baghdad over the legal status of foreign troops in the country. The U.S. cited the same reasons when it withdrew most of its forces in 2011.

Baghdad insisted that all such forces be subject to its laws and judicial system, while NATO sought legal immunity for its trainers. The previous impasse hasn’t emerged as a point of contention this time around.

NATO defense ministers are meeting for two days of talks in Brussels, where members also will discuss a pending agreement to launch two new alliance headquarters, in response to concerns about a more assertive Russia.

One command will focus on ensuring that U.S. troops and equipment can maneuver safely across the Atlantic Ocean in a crisis, while the other headquarters will focus on ground movement in Europe.

Locations for the headquarters haven’t yet been announced, but Germany is a top contender for hosting one unit, while the United States is the likely destination for the Atlantic command.

Defense ministers are expected to finalize plans for the new commands when members convene a summit of heads of state in July.