Children, parents in KMC being educated on 'stranger danger' 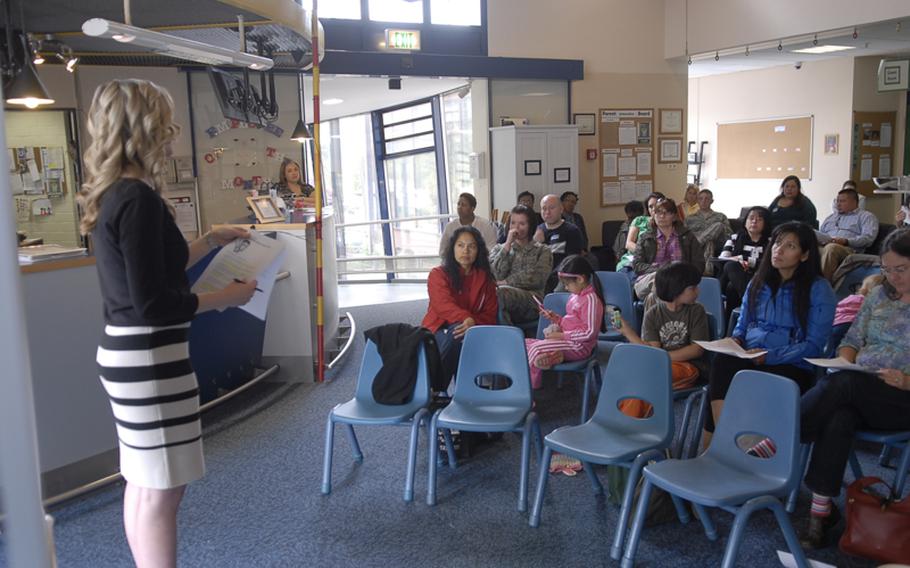 Josie Cordova, the Airman and Family Services Flight chief for the 86th Force Support Squadron, leads a presentation on "stranger danger" for parents May 3, 2012, at the Ramstein School Age site at Ramstein Air Base, Germany. Despite the title, the focus was more on teaching children to be aware of unusual or suspicious behavior in adults. (Jennifer H. Svan/Stars and Stripes)

RAMSTEIN AIR BASE, Germany &ndash; Air Force Tech. Sgt. Carla Moreno will no longer be sending her 6-year-old son out the door when the ice cream truck rings in her Ramstein Air Base neighborhood.

Moreno and other parents had strong reactions to an NBC &ldquo;Dateline&rdquo; program shown at the Ramstein School Age site Thursday in which a paid actor was able to lure children onto his ice cream truck.

The &ldquo;Dateline&rdquo; program shown Thursday, titled &ldquo;My Kid Would Never Do That: Stranger Danger,&rdquo; included actual scenarios that convicted predators have used to target children, including posing as an ice cream vendor.

Moreno said, like the children in the video, her son &ldquo;would be on the ice cream truck so fast and gone.&rdquo;

The &ldquo;stranger danger&rdquo; session, one of several planned, is among measures military and school officials are taking to better protect children in the wake of recent reports of child molestations and an attempted child abduction in the Kaiserslautern area.

The incidents have all been reported as happening on base, and investigators believe the cases may be connected.

All external doors and most of the perimiter gates will be locked, McMullen said in an interview Thursday. Visitors will have to be buzzed in at the main entrance and must show their ID cards if school staff don&rsquo;t recognize them, she said. A new buddy system will require children to travel in pairs or larger groups on school grounds.

The schools are presenting &ldquo;stranger danger&rdquo; lessons and inviting parents to school to find out what students are learning in the sessions, McMullen said.

With the students, &ldquo;the counselors go over what to do if something doesn&rsquo;t feel right,&rdquo; said Joe Lovett, principal of Ramstein Elementary School. &ldquo;We&rsquo;re real careful about the word &lsquo;stranger,&rsquo; because this could be a familiar person, so we tell them there&rsquo;s not just strangers to look out for.&rdquo;

&ldquo;It&rsquo;s teaching children to key in on &lsquo;What is it about the specific behavior that&rsquo;s making me uncomfortable?&rsquo; &rdquo; she said. &ldquo;One of the scary things on this base is that everyone has a uniform; everyone has an ID card,&rdquo; Cordova said. Parents need to tell their children that &ldquo;just because they have a uniform or ID card doesn&rsquo;t make them a safe person.&rdquo;