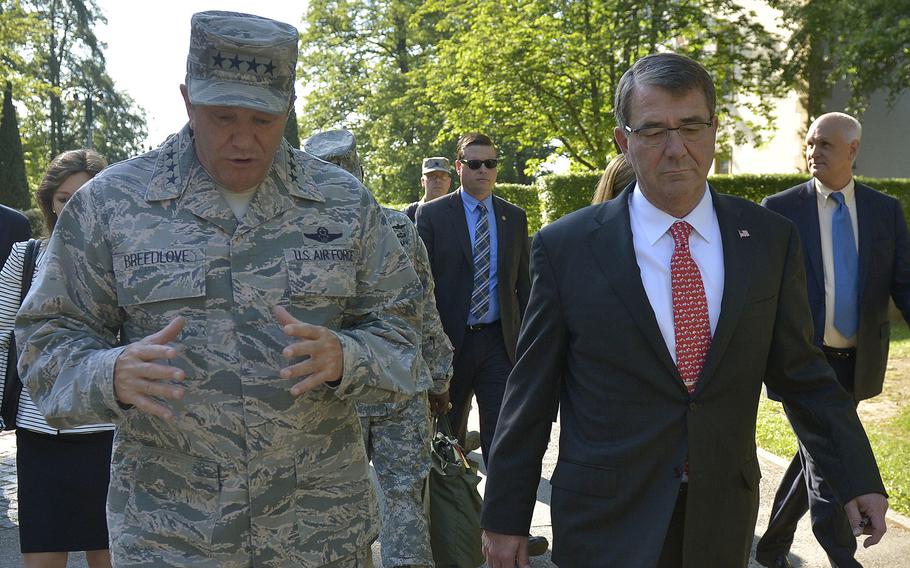 STUTTGART, Germany — The U.S. should continue to set aside special funds to maintain a beefed-up military presence in Europe, where more rotational forces, an expanded series of war games and increased fighter jet patrols have helped reassure allies rattled by Russian aggression in Ukraine, according to Defense Secretary Ash Carter.

Following a meeting Friday with military commanders and diplomats from across Europe at the U.S. European Command headquarters of Gen. Philip Breedlove in Stuttgart, Carter said it is clear the U.S. must find a way to ensure the so-called European Reassurance Initiative, begun last year, receives continuing support.

“We’re going to need to make that a part of our planning, programming, budgeting system going forward. There’s just no question about it,” Carter told reporters traveling with him, according to a transcript. “This is going to be an enduring challenge.”

The nearly $1 billion European Reassurance Initiative, approved by Congress in December, already has enabled the Pentagon to bolster its activities across the Continent, with a special focus on eastern Europe, where allies in close proximity to Russia and Ukraine are wary about Moscow’s intentions. However, the program, which is funded through overseas contingency funds, must be approved by Congress on an annual basis. While it remains unclear whether Congress will continue to support such funding, the ERI is shielded from the mandatory defense budget cap known as sequestration, which is imposed on the regular military budget. That could make it easier for the Pentagon to maintain funding support in the future should Congress fail to reach a deal that eliminates the mandated slowdown of spending in the base budget.

Since Russia’s annexation of Ukraine’s Crimea peninsula in March last year and Moscow’s continued backing of pro-Russian separatists in Ukraine’s east, U.S. officials have refocused their attention on security challenges in Europe, which had previously been on the strategic backburner.

Now, with a resurgent Russia in the east the rise of the Islamic State near NATO’s southern flank across the Mediterranean Sea, the alliance finds itself with a full agenda, Carter said.

“(It’s) sort of ironic if you reflect on the fact that a couple of years ago ... it was much discussed in NATO — what was NATO going to do next after Afghanistan and was there a mission for NATO?,” Carter said.

Now, he said, it’s clear that NATO has two priorities: Russia and “the Putin challenge to Europe and to the post-Soviet structure and order,” and the Islamic State “phenomenon, foreign fighters in North Africa in proximity to NATO shores.”

In recent years, the U.S. military has steadily drawn down its forces in Europe, which now stand at about 68,000 in total. However, the European Reassurance Initiative funds have helped augment the U.S. presence in the region with temporarily assigned forces from the States, enabling the steady rotation of additional armor through eastern Europe.

Among the high-profile missions that the ERI has helped support include U.S. Army Europe’s Dragoon Ride Stryker convoy, which sent troops on a more than 1,000-mile show of force road trip from the Baltics to southwestern Germany. The money also is paying for the rotation of a U.S.-based heavy armored brigade and increased fighter jet patrols over the Baltic states, as well as increased Navy deployments to the Black Sea.

Carter’s brain-storming session in Stuttgart was an opportunity for the secretary to hear assessments of the effectiveness of U.S. efforts to deter Russian aggression from U.S. military leaders from the combatant commands as well as diplomats from across Europe, said EUCOM spokesman Navy Capt. Greg Hicks.

“He (Carter) was particularly interested in hearing our feedback on how our European Allies are being impacted by Russian actions, and what additional Department of Defense training and exercises could assist,” Hicks said in a statement.

Following his meeting with military leaders in Europe, Carter is expected to offer advice to the White House on a way ahead in Europe.

Areas where the U.S. and allies could do more include increasing the number of joint military exercises as well as making improvements in intelligence sharing among NATO partners, Carter said.