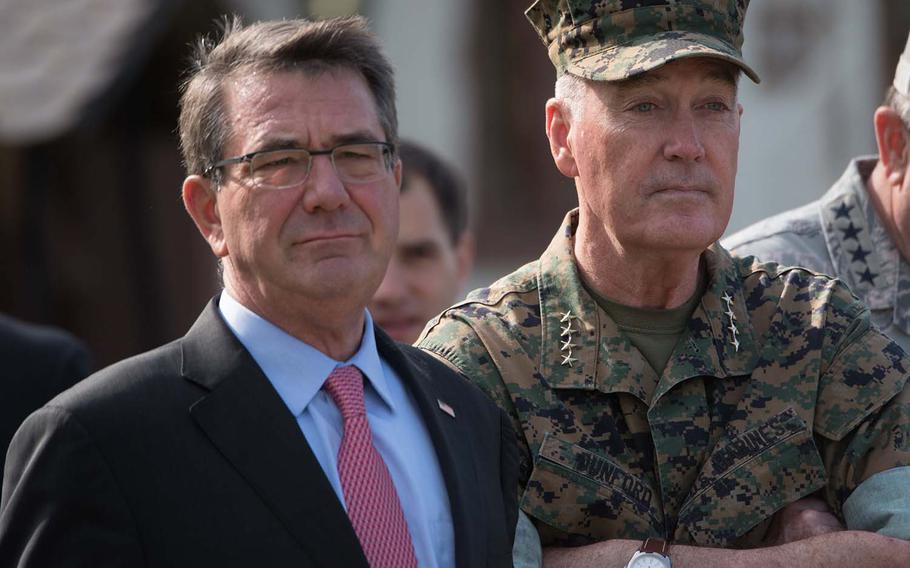 STUTTGART, Germany — The death of a Navy SEAL, the third U.S. servicemember to die in Iraq since the start of operations against the Islamic State group, is a reminder of the risks U.S. forces face in the mission, Defense Secretary Ash Carter said Wednesday.

After a day of talks with allies at U.S. European Command headquarters in Stuttgart on how to strengthen the U.S.-led coalition fighting the Islamic State in Iraq and Syria, Carter said the frontline death of Petty Officer 1st Class Charlie Keating IV was a necessary cost in the battle against the militants.

“We are putting these people at risk every day,” Carter told reporters. “Tragically, losses will occur, but this is necessary in order to protect our country, defeat this enemy and eliminate what really is an evil movement. And not to do that would entail even greater risks for our population.”

The U.S. is planning to deploy several hundred additional troops in Iraq and Syria, where roughly 5,000 already are operating.

Since the start of the U.S. campaign against the Islamic State in Iraq in August 2014, U.S. officials have sought to refute any suggestion the U.S. is back at war in Iraq, after withdrawing from the country in 2011. Officials have carefully defined what constitutes “boots on the ground” and a combat mission, but Carter was blunt about the circumstances of Keating’s death.

“He was in a firefight and he died in combat,” Carter said.

Keating was killed in an Islamic State attack north of Mosul.

Carter, who on Tuesday presided over a EUCOM change of command, turned his attention Wednesday to the fight in Iraq and Syria, meeting with leaders from 11 countries contributing in various ways to the U.S. coalition.

There were no concrete commitments generated during the talks, but the allies pledged that they would soon be doing more in the campaign.

Key priorities on the ground in Iraq are stabilizing Anbar province, training and developing more Iraqi and peshmerga forces and identifying and training more local forces in Syria that can “isolate and pressure Raqqa,” the Islamic State group’s de facto capital, Carter said.

In Syria, there has not been a strong indigenous group of fighters for the U.S. to support. In 2015, a multimillion-dollar effort to build a Syrian force was abandoned after training only a few fighters, drawing sharp criticism from Congress.

Still, the U.S.-led coalition, working withlocal forces has made gains against the Islamic State group, which has steadily lost territory in both Syria and Iraq. For the U.S., the long-term challenge is ensuring stability once Islamic State fighters are cleared from an area. Poor governance and ethnic rivalries, primarily between Sunni and Shiite Muslims, have long been at the root of tensions driving unrest.

“We called on all of Iraq’s political leaders to commit themselves to the legal and peaceful reconciliation of political differences in order to confront the nation’s challenges and to remain united against the common enemy of ISIL/Daesh,” said a joint statement by coalition members taking part in Wednesday’s talks. It used alternative acronyms for the Islamic State group.

When asked whether Germany would contribute fighter jets, von der Leyen indicated support would come in other areas. “Not everyone has to or can do everything,” von der Leyen told the Stuttgarter Nachrichten. “One should focus on areas where one is good.” Carter said the coalition must work to help Iraq bring about better governance. Hundreds of protesters stormed Iraq’s parliament building last week, demanding reforms.

“Much still hinges on the nonmilitary aspect of countering ISIL,” Carter said.

The meeting also touched on the threat the Islamic State now poses in Libya, where the group has gained a foothold.

Allies, such as Italy, have pressed for more direct involvement in Libya, where unrest is contributing to a migrant crisis in Europe. Carter, during a news conference a day earlier in Stuttgart, said more direct, expansive involvement in Libya would have to be at the invitation of the still fragile internationally backed government there. Libya has been a failed state with multiple governments since 2011, when NATO’s military intervention ousted the regime of former strongman Moammar Gadhafi.

Carter said he expects more meetings among coalition members in the months ahead to hammer out contributions needed to deliver a “lasting defeat” to the Islamic State group. At the previous meetings in Paris and Brussels, Carter secured a range of pledges for more support in areas such as extending air operations, training and logistics efforts.

NATO also is considering whether it needs to do more in Iraq, particularly in the area of training.

Carter said a larger NATO role would be helpful, particularly in the area of coordinating force generation efforts among allies.

“This is going to be a hard, but a necessary fight,” Carter said.