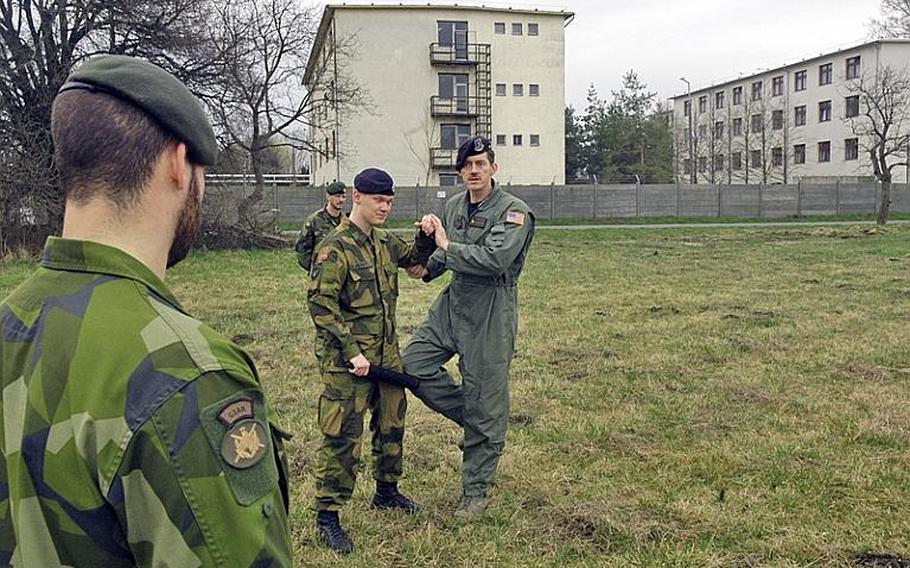 Master Sgt. Frank Prebble gives instruction to Swedish and Norwegian members of the Heavy Airlift Wing's Raven Team. The Ravens are the security element for the C-17 crew, securing the areas around the plane upon landing. Most of the training, however, focuses on communication skills and using "verbal judo" to resolve disputes that may occur in potentially hostile places. (John Vandiver/Stars and Stripes)

STUTTGART, Germany &mdash; It all comes down to trust: Trust that shared defense won&rsquo;t come at the cost of national defense, or leave some members of the NATO alliance more vulnerable than others.

In an era of declining budgets, defense officials in Europe have touted &ldquo;smart defense&rsquo;&rsquo; as a possible remedy for what ails NATO, which two decades after the Cold War remains dependent on the United States for many of its security needs.

&ldquo;Not everyone needs a submarine force, and one ally&rsquo;s euros might be better spent on minesweepers or special forces, for example,&rsquo;&rsquo; Adm. James Stavridis, NATO&rsquo;s top military officer, wrote last week in a blog focused on the goals of the NATO summit May 20-21 in Chicago.

But a smart defense plan requires a leap of faith among alliance members, with some countries relying on others to execute important missions. For example, could Poland spend more on its ground forces and less on air defense, trusting the Germans to invest in anti-aircraft technology? Tough economic times demand that trust, argue some in NATO.

Smart defense has become the buzzword in lean economic times of NATO planners looking to do more with less as they reshape a shared defense strategy.

While there has been a lot of talk of pooling resources, British Defense Secretary Philip Hammond argued at the Munich Security Conference in February that collaboration needs to go beyond that.

&ldquo;Common standards, interoperability, connectivity have to be built into this agenda, and we need to think of these things as the DNA of smart defense, they are the platform on which these collaborative efforts to get more for our buck have to be built in the future,&rdquo; Hammond said.

Fiscal necessity, he argued, should be seen not as a threat but an opportunity to create new thinking.

If significant steps aren&rsquo;t taken toward using &ldquo;smart defense&rsquo;&rsquo; in shared strategy, some analysts argue, it could spell the beginning of the end of the alliance as a serious military force. Others argue such a profound change can only be accomplished incrementally and it is unrealistic to expect major changes in Chicago.

Just last year, outgoing Defense Secretary Robert Gates cautioned allies that a war-weary U.S. was tired of its role as NATO&rsquo;s bankroller, and that the alliance faces a &ldquo;dim if not dismal&rsquo;&rsquo; future if Europe doesn&rsquo;t invest more wisely in defense.

&ldquo;Smart defense, in a perfect world, would mean NATO partners trusted each other to the extent they could give up a chunk of their own capability to focus on things they are really good at,&rdquo; said Jan Techau, the director of Carnegie Europe, the European Centre of the Carnegie Endowment for International Peace. &ldquo;The benefit is that you save money and get more bang for the buck. You don&rsquo;t have double, triple, quadruple of the same assets or redundancies. You don&rsquo;t have everybody doing a little bit of everything.&rdquo;

Better burden-sharing, with nations carving out unique niches, is one way to keep NATO vital as Europe struggles to emerge from an economic crisis that&rsquo;s putting a strain on resources, alliance leadership acknowledges.

Getting to that point could take time, however, as it means giving up some control to allies who may not agree on the best approach in a given situation.

&ldquo;One of the main drivers of smart defense is to say we are aware of the gaps, we can&rsquo;t close them alone, so let&rsquo;s do it through multinational collaboration,&rdquo; said Joachim Hofbauer, an expert on U.S. and European defense acquisition at the Center for Strategic and International Studies in Washington. &ldquo;Everybody gets the logic of it, but it doesn&rsquo;t always work out that way. At the end of the day, it all depends on how well NATO succeeds in translating those theories into actual gains.&rdquo;

NATO members have had some recent successes with resource sharing, including an airlift consortium of mostly NATO countries operating out of Hungary.

An investment strategy that reduces redundancies in acquisition could help NATO become less reliant on the U.S. for crucial war fighting capabilities.

&ldquo;During our operation in Libya, the United States deployed critical assets, such as drones, precision-guided munitions and air-to-air refueling. We need such assets to be available more widely among Allies,&rdquo; Anders Fogh Rasmussen, NATO&rsquo;s secretary general, wrote in a recent assessment of the mission.

In Chicago, NATO will take measures to address those problems, according to Rasmussen.

But numerous obstacles stand in the way of a grand, burden-sharing, resource pooling alliance, including concerns about encroachments on national sovereignty.

&ldquo;Governments who cooperate closely on defense matters need to be certain that partners will do their part when called upon to participate in operations,&rdquo; wrote Bastian Giegerich, fellow at the German think tank, Stiftung Neue Verantwortung, in a recent paper. &ldquo;On the other hand, governments will worry about being pressured to participate in operations they themselves do not consider vital. Hence, pooling and sharing requires a degree of trust that is currently not shared among all NATO allies.&rdquo;

Rather than NATO-wide initiatives, pooling of resources is more likely to come in the form of pragmatic cooperation among a few countries with shared interests, Giegerich wrote.

There also are economic concerns. When it comes to granting defense contracts, countries are usually more inclined to do business with domestic corporations. Add to that different budget cycles and varying military and strategic ambitions and the &ldquo;smart defense&rdquo; concept gets even more complicated, Hofbauer said.

From a national perspective, defense spending is about more than bolstering defense capabilities, Techau said.

&ldquo;For a lot of countries, it&rsquo;s partly about defense. It&rsquo;s also about supporting industry, jobs, and the symbolic value of keeping people in uniform,&rdquo; Techau said. &ldquo;My feeling is, we will not see a revolution or 180 degree turn around in Chicago. It&rsquo;s politically too difficult to do this.&rdquo;

If smart defense is to be achieved, it will be incremental and over many years, he said.

&ldquo;In the next three, five years, there won&rsquo;t be the kind of differences the U.S. wants to see,&rdquo; Techau said.

In other words, if NATO launches another mission such as the one it conducted in Libya, it will be the U.S. that will be called upon to do the heavy lifting, footing much of the bill and technology.

Despite the skepticism, there is a sense of urgency at NATO headquarters, where officials have spent much of the past year talking up the potential of &ldquo;smart defense&rdquo; as the answer to operating in an age of austerity.

Skeptics, however, doubt that Rasmussen&rsquo;s pledge to deliver concrete &ldquo;smart defense&rdquo; commitments in Chicago will translate into a new reality for NATO.

&ldquo;Right now, I wouldn&rsquo;t expect too much from Chicago,&rdquo; Hofbauer said. &ldquo;Implementing something like this will take a long time.&rdquo;

Still, NATO remains too important for the U.S. to turn away from, even if allies fall short of expectations, Techau said.

&ldquo;Smart defense certainly is a big issue, but it&rsquo;s not a make or break it situation,&rdquo; Techau said. &ldquo;NATO has value in ways people don&rsquo;t even notice. Think of the transparency it creates among allies, the contingency planning that takes place.

&ldquo;It&rsquo;s the best agency we in the West have to deal with security issues,&rdquo; he said. &ldquo;Look around the world? Where else does the U.S. have such allies?&rdquo;