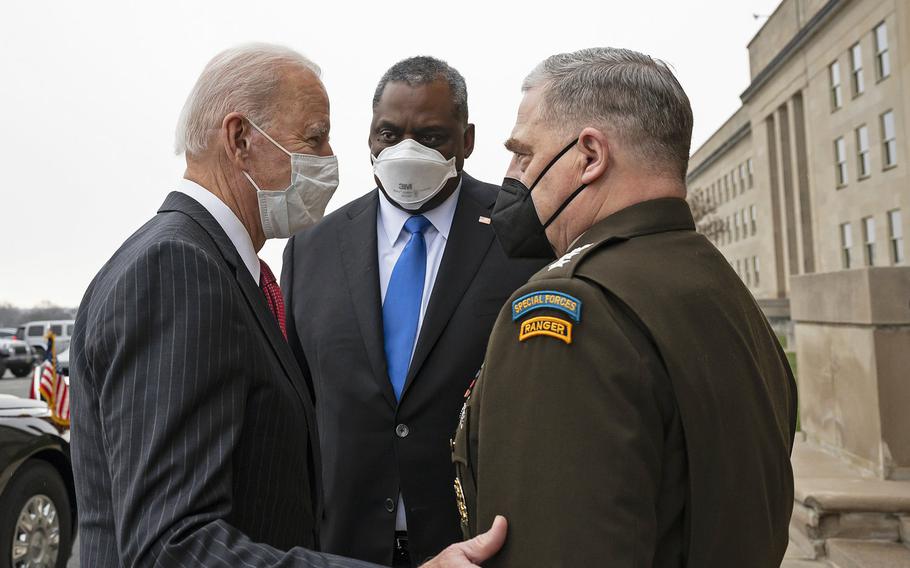 STUTTGART, Germany — On the eve of a major NATO meeting, Defense Secretary Lloyd Austin said he would bring a new level of respect to the way Washington works with allies, but also called on members to meet their defense spending obligations.

“We are not withdrawing from Europe,” Austin said in an editorial published in the Washington Post on Wednesday, the first day of a 2-day meeting of NATO defense ministers.

He is now reviewing the merits of the Trump administration’s plan to withdraw nearly 12,000 troops from Germany, a proposal that drew skepticism from current administration officials during last year’s election campaign.

“Our alliances and partnerships are strategic advantages none of our competitors can match. They lend to the mission-unique capabilities and credibility that sometimes each of us alone might lack,” Austin said. “But teams succeed only when every player is trusted and respected. And our alliance teammates haven’t always felt that respect.”

The tone was likely to be welcomed by NATO members who faced frequent criticism from former President Donald Trump. He regularly criticized allies for underinvestment in defense and at times questioned the value of the alliance.

Although defense spending was the hallmark issue for Trump, it’s still likely to feature prominently in Austin’s talks with allies.

NATO members are expected to increase overall spending for the seventh straight year, even though only nine of 30 members will hit the alliance benchmark of dedicating 2% of gross domestic product to their respective militaries.

“It is heartening to see many of them meeting or exceeding their obligations, even as further increases are essential for some to get there,” Austin said.

At NATO headquarters in Brussels, Secretary-General Jens Stoltenberg this week reaffirmed the importance of meeting the 2% spending target, but also said other reforms are needed.

Stoltenberg wants defense ministers to consider increasing NATO’s shared budget. Such a change would mean that countries sending troops on NATO missions wouldn’t be stuck paying the whole cost of the deployment.

The move is likely to be welcomed by the Pentagon, which pays the bill for various high-profile U.S. missions, such as leading a multinational battle group in Poland focused on deterring potential Russian aggression.

Stoltenberg, after an initial round of talks Wednesday, said the Biden administration represents a chance “to open a new chapter in relations between Europe and North America.”

Later this year, allies will hold a heads of state summit, during which Stoltenberg said he hopes allies will agree to a new “strategic concept” to deal with new threats.

It’s been 11 years since allies last adopted an overarching strategy. But that concept didn’t deal with the rise of China, climate change or Russia’s moves in Ukraine, Stoltenberg said.

During the two-day ministerial, allies also are expected to agree to an expanded training mission in Iraq, which comes at Baghdad’s request, Stoltenberg said.

The future of the war in Afghanistan also is on the agenda.

Allies had been anticipating deciding the way forward in connection with a May 1 deadline for the withdrawal of foreign forces in the country.

However, it’s likely that key decisions will be pushed back while the Biden administration reviews the mission and force levels in Afghanistan, which stand at about 2,500 U.S. troops and just over 7,000 allied service members.

A senior U.S. defense official, briefing reporters Tuesday ahead of the ministerial, said “there have not been any decisions on Afghanistan troop levels.”

“The United States and NATO went into Afghanistan together, we will adjust together, and if the time is right we will leave together,” the defense official said under customary conditions of anonymity.

The next decisions on forces in both Afghanistan and Europe “will be made in close consultation with our allies and partners,” Austin said.