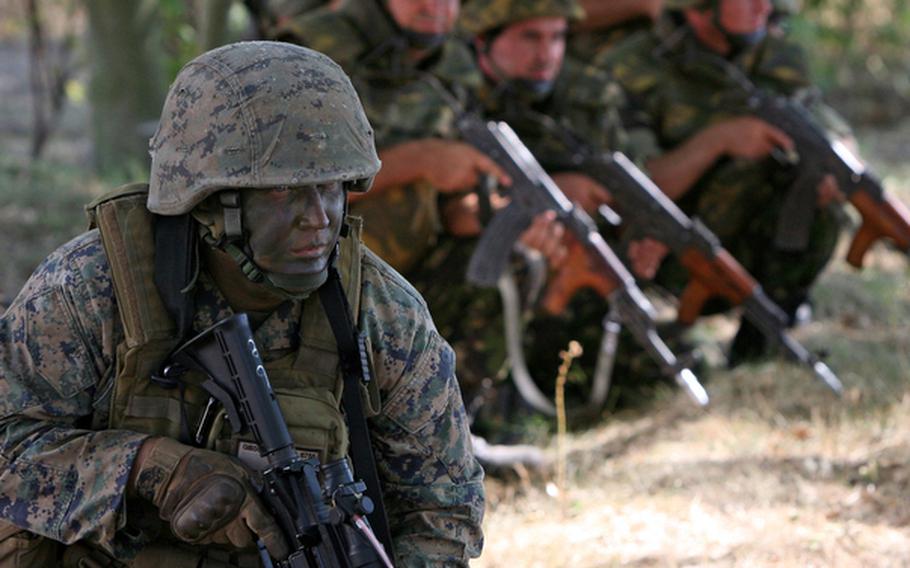 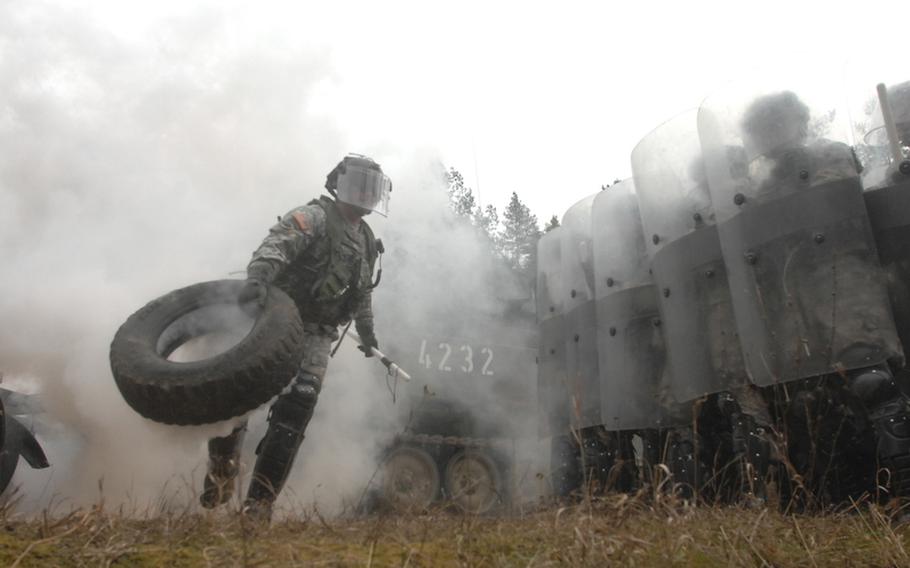 A soldier hurls a smoking tire away from the action during a civil disturbance training exercise at the Joint Multinational Readiness Center on Thursday in Hohenfels, Germany. The simulation, part of a larger exercise to train U.S. National Guard troops and multinational soldiers bound for peacekeeping duties in Kosovo, sought to mimic recent events in the country. U.S.-based troops play a significant role in many military missions in Europe. (Steven Beardsley/Stars and Stripes) 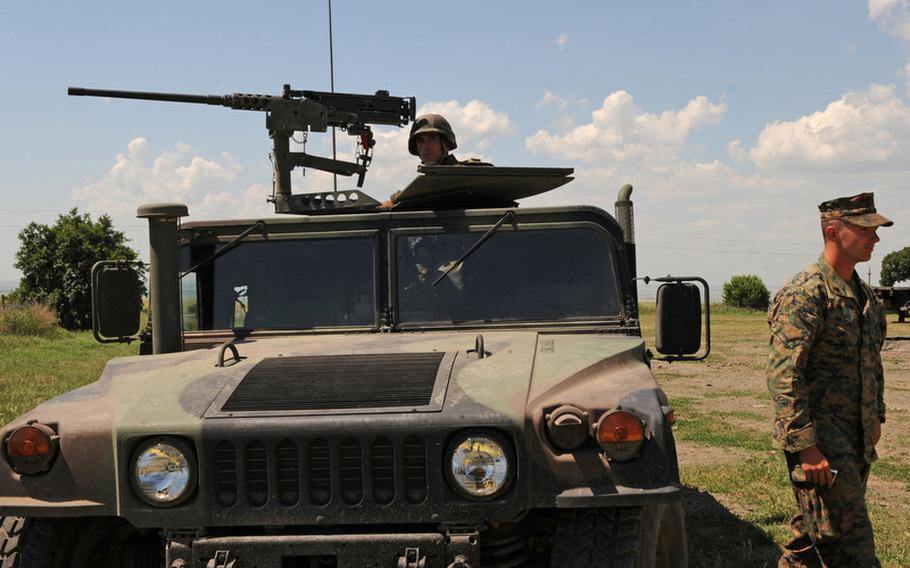 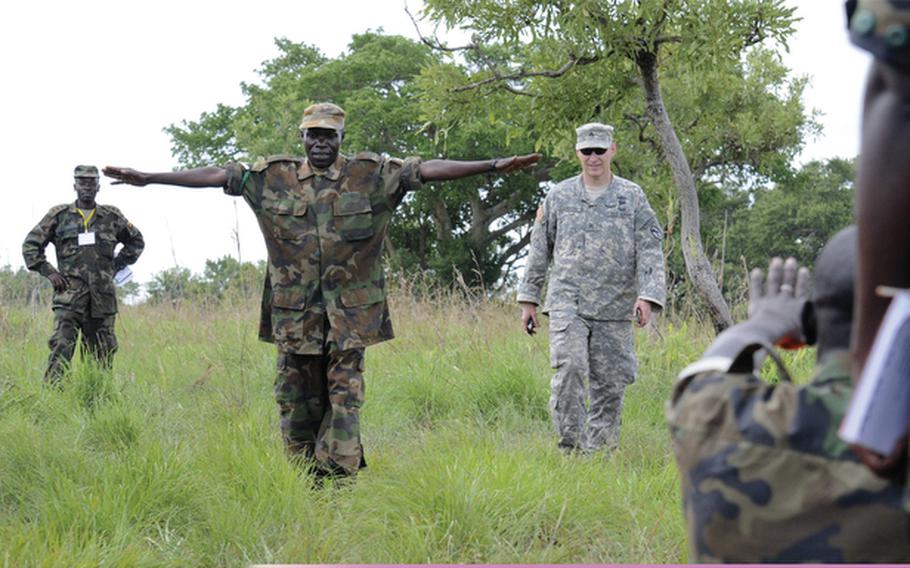 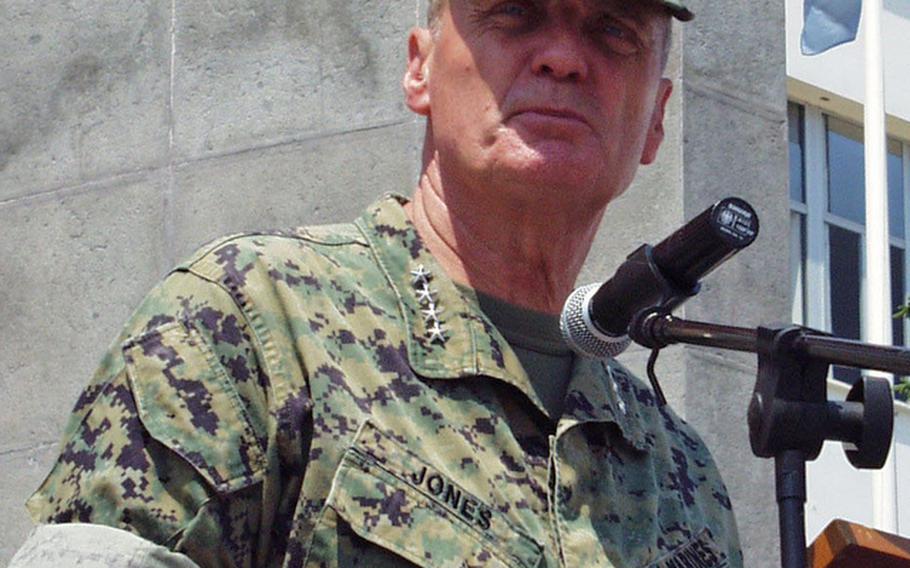 Former Supreme Allied Commander Europe, Gen. James Jones, speaks during a transfer of authority ceremony of NATO's Response Force in Naples, Italy, in 2005. Jones, who was later President Obama's first National Security Adviser, cautions against a wholesale force reduction in Europe, which he says would jeopardize the U.S.'s standing in NATO and strain EUCOM's training mission. (Sandra Jontz/Stars and Stripes)

STUTTGART, Germany &mdash; When a task force of Marines deployed to eastern Europe on a five-month mission to train partner militaries, it did not come from U.S. bases in nearby Germany. The 185 reservists flew over from a base in the States.

Parterships with nations from the Baltics to the Balkans have been a cornerstone of the mission of U.S. forces in Europe since the end of the Cold War, but such training increasingly is conducted by troops who fly in from the U.S. for short, targeted missions. As questions arise about the need to maintain a large U.S. presence in Europe, some in the military are suggesting this U.S.-based model could be a more cost-effective way to maintain ties with allies who rely on U.S. leadership.

The U.S. has been restructuring its Europe-based force since the end of the Cold War, when there were about 300,000 U.S. troops in Europe. There are about 80,000 today, and the drawdown continues with at least one brigade scheduled to return to the States by 2015, though military leaders hint it could leave much sooner.

With massive budget cuts looming, the withdrawal of the last U.S. troops from Iraq and a drawdown of U.S. combat troops from Afghanistan slated to be completed by 2014, military leaders are re-evaluating the scope and focus of the military, and that is raising questions about how large a force is needed in Europe and where it should be located.

Moves are under way to relocate and re-allocate Europe-based troops and resources to address pressing security concerns, particularly preparing for the threat of terrorists in Africa and bolstering NATO&rsquo;s missile defense system to counter a potentially nuclear-armed Iran. Pending changes also are influenced by concerns about the rise of military might in the Pacific, particularly China.

One option for cutting costs, some argue, is to use U.S.-based forces to help build partnerships with militaries in eastern Europe and Africa. Recently, Marine Forces Europe showed how that could be done when it launched its Black Sea Rotational Force, which consisted of U.S.-based Marines on a five-month mission to conduct training exercises across eastern Europe.

According to data provided by EUCOM, the National Guard led 207 &ldquo;military-to-military&rdquo; engagements with armed forces across Europe in fiscal 2011, one example of the large role played by U.S.-based servicemembers.

&ldquo;As budgets get tight, it&rsquo;ll be a very hard sell that training other militaries should remain a priority, and that we need forces permanently stationed in Europe at current levels in order to conduct that training,&rdquo; said Kori Schake, a National Security Council director of defense strategy and requirements during the Bush administration.

There are arguments to be made for maintaining some force presence in Europe.

Officials at EUCOM headquarters in Stuttgart and analysts of U.S.-European relations say working closely with European allies ensures that U.S. troops have credible, well-trained partners and bolsters NATO, which relies on U.S. leadership.

&ldquo;While tough fiscal decisions are in the process of being made, and as we balance capability and capacity, U.S. force presence in Europe remains the bridge between the U.S. and the world&rsquo;s largest economy,&rdquo; said Maj. Ryan Donald, a EUCOM spokesman, referring to the collective GDP of Europe. &ldquo;We know any adjustments to defense spending, missions and force structure in this theater will be implemented carefully and thoughtfully.&rdquo;

How many and where?

While it remains to be seen whether the current budget crisis will result in major adjustments to the force structure, some changes will be coming for the troops and the 130,000 family members who accompany them at bases from Germany and the United Kingdom to Italy and Spain.

While all service branches are represented in Europe, the Army and its 42,000 soldiers is the largest, followed by the Air Force with about 25,000 airmen. Marine Forces Europe maintains about 150 troops in Germany, relying on rotating forces to carry out its missions. The Navy also maintains a relatively light footprint, with about 8,000 sailors in Europe, though its strategic importance may be increased, given plans to permanently assign four missile defense-equipped destroyers to the 6th Fleet in Naples, Italy.

According to Schake, military leaders in Europe are in a tough position.

&ldquo;I don&rsquo;t think it&rsquo;s an inevitable outcome, and EUCOM components have some very persuasive folks in their leadership now, but it&rsquo;ll be a hard sell,&rdquo; she said. &ldquo;USAREUR has a good case to make that forces assigned to them are busy. They&rsquo;re deploying and doing great work. Whether they need to be in Europe to do that work will be the crucial argument.&rdquo;

Opinions are divided on the ramifications of large-scale redistribution of forces.

While some military insiders argue that a significant drawdown in Europe would foretell the end of NATO, others say the alliance is no longer dependent on a large U.S. presence overseas.

Michael Cox, an expert on U.S. and European relations at the Chatham House think tank in London, said the U.S. presence is more about being close to hot spots.

&ldquo;The fact is the U.S. forces aren&rsquo;t in Europe to defend Europe from anything,&rdquo; he said. &ldquo;They&rsquo;re more symbolic in that sense.&rdquo;

A substantial drawdown could prompt concerns among Europeans about the U.S. losing interest in the region, but the U.S. role in NATO would probably remain intact, Cox said.

Officials at EUCOM, meanwhile, say whatever changes come, the U.S. will remain engaged in Europe.

When retired Gen. James Jones was running EUCOM between 2003 and 2006, the military was in the midst of its biggest transformation since the collapse of the Soviet Union. Jones, who would go on to serve as President Barack Obama&rsquo;s first national security adviser, was the main architect of a downsizing in Europe that continues today. In recent years, dozens of bases have closed as part of that plan. In 2003, there was a push to cut much deeper.

&ldquo;I used to argue with Secretary [Donald] Rumsfeld over this,&rdquo; said Jones, recalling his battles at the Pentagon with the former defense secretary. &ldquo;His idea was to bring everybody home.&rdquo;

Jones cautions against a wholesale reduction, which he says would jeopardize U.S. standing in NATO and strain EUCOM&rsquo;s training mission.

&ldquo;It&rsquo;s a question of how much is enough and how much do you need to do what you want to do,&rdquo; Jones said. &ldquo;Whatever forces we leave on the continent, they are not going to be European forces, they&rsquo;re going to be Euro-African forces. This is a platform for Africa as well. Being closer to Africa in Europe is a lot better than being in Fort Carson.&rdquo;

Without offering specific numbers, Jones said the mission in EUCOM should be executed by a mix of rotational and permanently stationed units.

Regarding a large-scale drawdown, he said, &ldquo;I would be very careful. Where is Russia going to go in the next 10 years under [Prime Minister Vladimir] Putin?&rdquo;

Retired Gen. Charles Wald, who served under Jones as EUCOM&rsquo;s deputy commander and was part of the transformation team in Europe, said if the force level were reduced to 30,000 or 50,000 troops, the U.S. would still demonstrate its commitment to Europe and retain influence.

&ldquo;If we consider ourselves a global player, then we need to maintain our presence globally,&rdquo; Wald said. &ldquo;We&rsquo;re not in Europe to protect Germany anymore. We&rsquo;re there to protect our interests.&rdquo;

Without U.S. leadership in Europe, NATO never would have taken the lead in Libya, Wald argues.

For Jones, wholesale cuts to the military&rsquo;s presence in Europe and across the globe would come with big risks. Without it, &ldquo;you create vacuums around the world,&rdquo; Jones said. &ldquo;If all you want to do is fight, then bring them home.&rdquo;

&ldquo;I&rsquo;m a Navy guy, so I believe that it&rsquo;s important for us to be involved globally and be forward present off our shores,&rdquo; Abbot said. &ldquo;We can&rsquo;t just garrison ourselves in the United States.&rdquo;