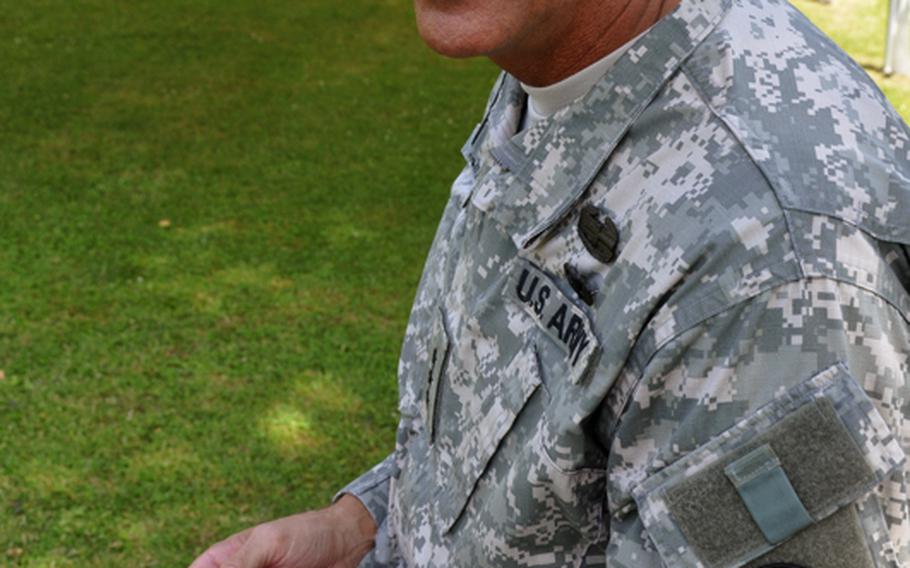 Lt. Gen. Mark P. Hertling, deputy commander of Initial Military Training, is armed with his own smart phone. He hopes apps can reach a new generation of soldiers. (Dan Blottenberger/Stars and Stripes)

BAMBERG, Germany &mdash; If a new pilot program is a success, U.S. soldiers may one day find Army regulations, training aids, and emergency procedures just by tapping on their mobile phone keypads.

Starting this fall, the value of using smart phone applications to help train troops will be tested at several Army schools in the States through a program called &ldquo;Connecting Soldiers to Digital Applications,&rdquo; Army officials say.

&ldquo;Just picture basic trainees standing in line for chow and pulling out their cell phones when they have downtime to study on their smart phones,&rdquo; said Mollie Sabo, a training analyst for the project at Initial Military Training or IMT.

The Army&rsquo;s basic soldiering guide, which dates back to the days of George Washington and is commonly known as the &ldquo;Blue Book,&rdquo; was one of the most recent applications developed for smart phones, said Maj. Gregory Motes, the chief of the school.

Instead of carrying the Blue Book in their uniform pockets, as is now required, soldiers would be able to access the book through their phones, Motes said.

&ldquo;This is the first time in history the Blue Book is a mobile app,&rdquo; Motes said.

Other developments include a new physical training readiness application and a handbook for new lieutenants, he said.

That work will be expanded at the other schools in the pilot program, Lt. Gen. Mark Hertling, deputy commander of Initial Military Training, said in an interview with Stars and Stripes.

&ldquo;In IMT, we are constantly developing apps for iPhone, Droid, iPad and reader devices. Instead of issuing boxes of manuals at a course, for example, we are issuing readers that have all the course material plus field and technical manuals,&rdquo; Hertling said.

The mobile training applications are another way the Army is trying to incorporate the digital devices young troops already use into their basic training regimens.

&ldquo;What we are seeing with the 18-, 19-, 20-year-olds is they know how to use this stuff,&rdquo; Hertling said, who said the biggest innovation of his basic training days was the transition from the slide rule to the calculator.

&ldquo;We are a bunch of old guys that don&rsquo;t (know). What we&rsquo;ve got to do is get some smart people to teach us how we can take our experience and put it on something (trainees) can learn from and then you have the best of both worlds,&rdquo; he said while scrolling through the Army training applications he has already built into his iPhone.

The Army hopes to eventually have a site where soldiers can download applications onto their smart phones, Motes said.

Four smart phone models will be used for the pilot program: the iPhone, Samsung Moment, HTC Touch Pro II and the Palm Treo Pro. These phones were chosen because they represent the various types of commercial smart phones currently available and span three types of operating systems: Apple, Google, and Windows Mobile, the program overview states.

Even though this technology soon could be seen in basic training, Hertling realizes initially it may be met with some skepticism. Some soldiers believe that the use of smart phones could detract from basic trainees&rsquo; discipline.

&ldquo;I understand the Army is trying to stay modern with the newest technology, but I think allowing soldiers in basic training access to smart phones is a mistake,&rdquo; said Sgt. Adrienne Killingsworth, from the 18th Military Police Brigade in Mannheim, Germany.

&ldquo;Using apps will potentially distract soldiers from training. Hands-on learning is the best type of learning and you are not going to get that from a smart phone, but I understand their intent,&rdquo; Killingsworth said.

&ldquo;We can use the technology, but we can&rsquo;t allow the technology to replace the skill of soldiering,&rdquo; Hertling said.