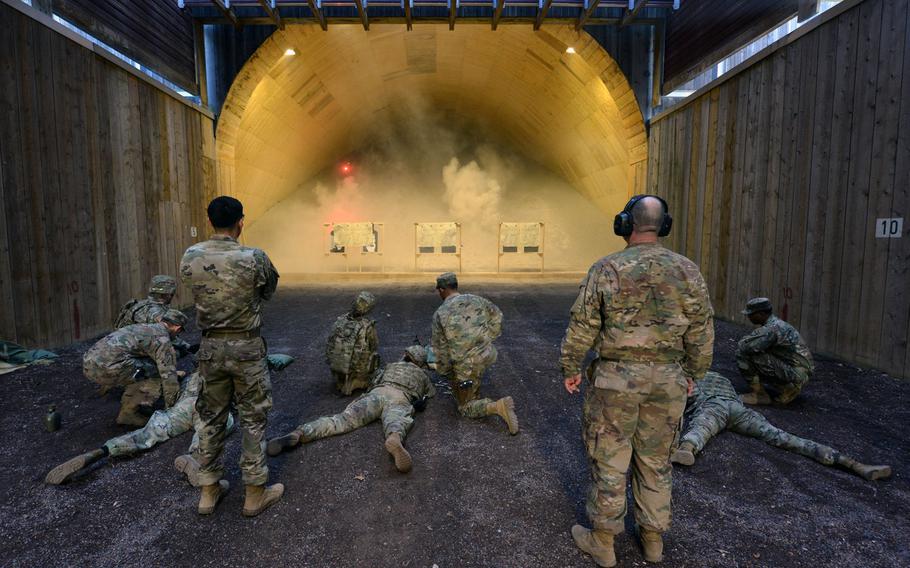 U.S. soldiers participate in an exercise at the Panzer Range Complex in Boeblingen, Germany, April 16, 2019. The Army will move forward with a nearly $2 million project to soundproof the suburban Stuttgart firing range, despite plans to leave the area. (JASON D. JOHNSTON/U.S. ARMY)

STUTTGART, Germany — The Army is moving forward with a nearly $2 million project to soundproof a firing range in Stuttgart, despite a Pentagon directive to eventually leave the area after decades of a U.S. military presence.

The U.S. Army is expected to pay about $1.4 million in the spring to install barrier walls at two open-air sites at Panzer Kaserne firing range, located just south of Stuttgart in the town of Boeblingen. Under an agreement with the Army, Boeblingen will contribute $300,000 toward the project.

The project and how it is being split financially was finalized before the Pentagon announced it intends to move U.S. European and Africa commands, as well as several subordinate units, out of the Stuttgart area as part of a troop drawdown in Germany. A timeline to execute the plan is still being drawn up, but if it comes to fruition it will mean the military will have dumped millions of dollars into projects on bases that will eventually be vacated.

The Army in Stuttgart is proceeding with the range soundproofing because it has an obligation to “maintain good relations with our host nation,” said Rick Scavetta, a Stuttgart Army garrison spokesman.

“The noise from training on that range has been a historical source of complaints and dissatisfaction,” he said. “While we await DoD’s plan for how to implement the European Posture Realignment in Germany, U.S. Army Garrison Stuttgart will continue to move forward on local projects that we have been directed to complete.”

The plan comes after more than a decade of back-and-forth between the military and local government officials about how to deal with the crackle of gunfire at the range, which can be heard in nearby residential areas.

The costs for soundproofing the range have soared since 2018, when the estimate was $800,000 and Boeblingen was slated to pick up half the tab. A year later, the project’s price tag climbed to more than $2 million, with the U.S. agreeing to cover most of the additional costs and the Germans contributing a much smaller share.

The overall price tag has dropped since then and now stands at $1.7 million, the garrison said. But the cost-sharing agreement remains the same, with the U.S. financing the lion’s share of the project.