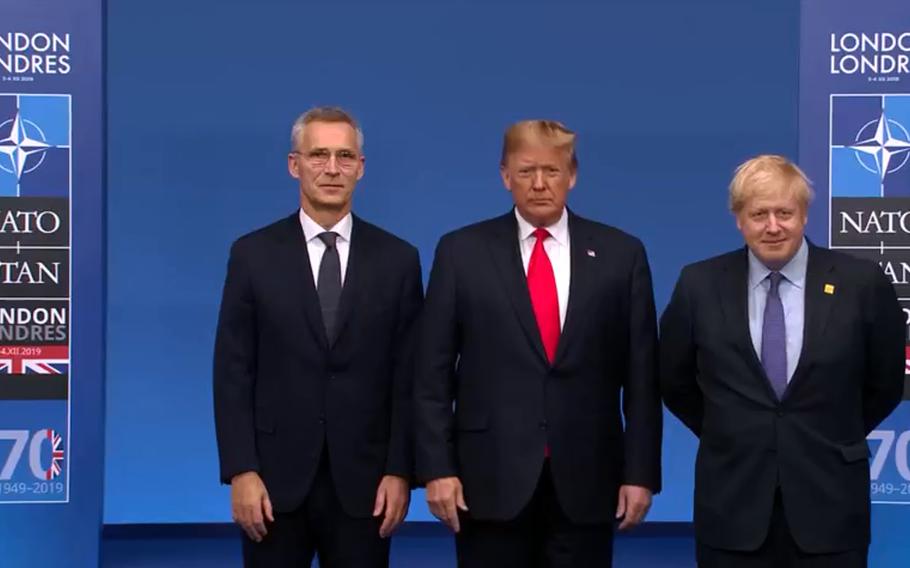 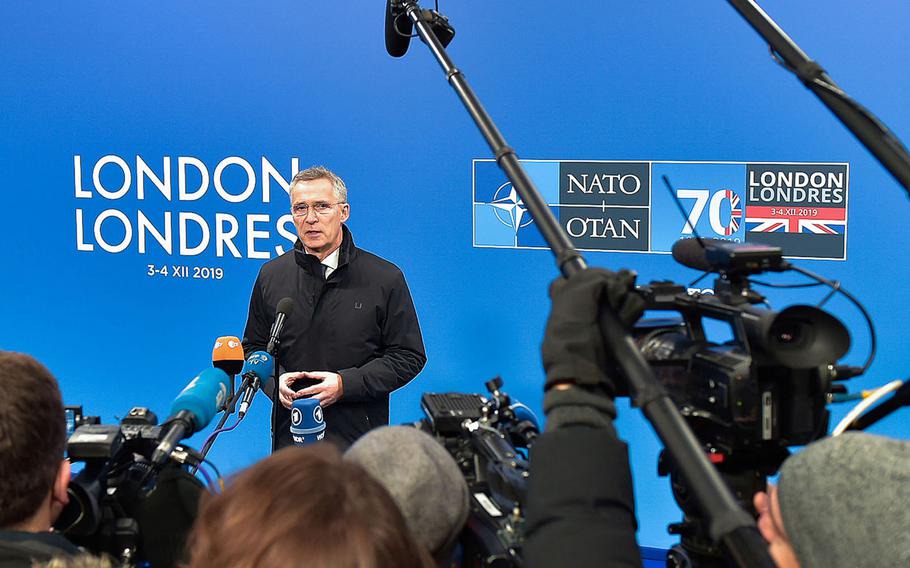 NATO Secretary-General Jens Stoltenberg talks to the media before the start of the NATO leaders meeting Wednesday, Dec. 3, 2019. (NATO) 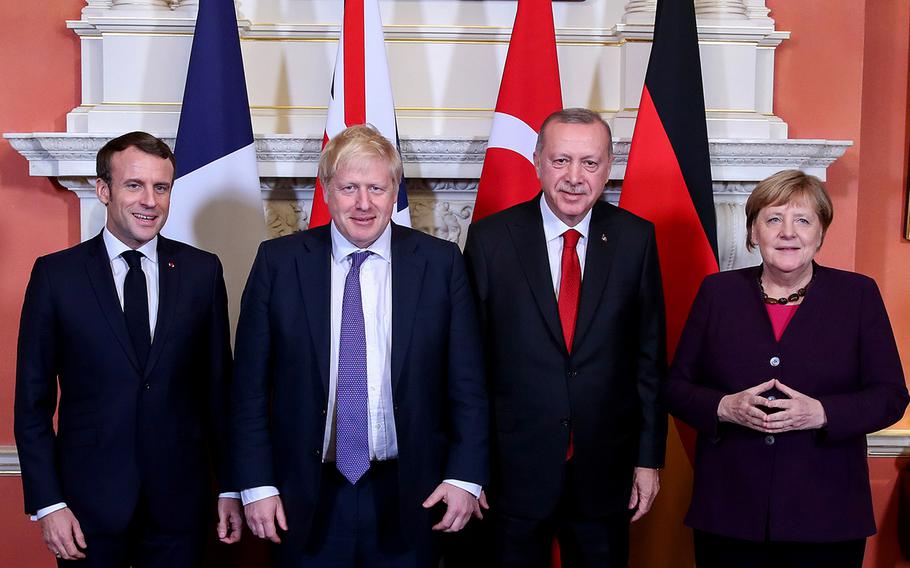 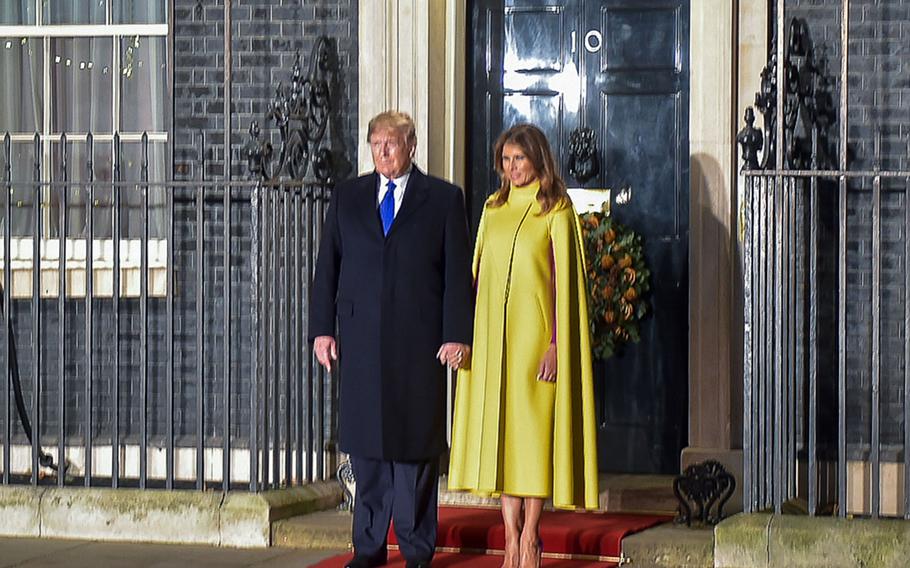 President Donald Trump and fellow NATO leaders approved a defense plan for the Baltics and Poland on Wednesday, overcoming resistance from Turkey, which had threatened to block it unless other alliance members designated Kurdish fighters in Syria as terrorists.

Speaking at the end of two days of talks in London, Trump heaped praise on Turkey when asked about the Baltic defense plan. While there are conflicting views within the alliance over Ankara’s invasion of northern Syria and its plan for containing Islamic State, Trump offered support.

“Frankly, a lot of people have great respect for Turkey for the work that they’ve done,” Trump said.

NATO Secretary-General Jens Stoltenberg said allied leaders didn’t discuss the Kurdish YPG militia before passing a revised defense plan for the Baltics and Poland. Lithuanian President Gitanas Nauseda said in a statement that the agreement was a “huge achievement not only for our country, but for the whole region.”

Although NATO managed to take steps forward in London, there was acrimony among some of its leaders.

“He’s two-faced,” Trump said of Trudeau during a brief news conference alongside German Chancellor Angela Merkel on Wednesday. He paused and said, “And honestly, with Trudeau, he’s a nice guy. I find him to be a very nice guy.”

Trump said Trudeau likely was angry over his repeated demands that Canada spend more on defense.

The dispute with Turkey also had threatened to drive a wedge between allies. Macron on Tuesday accused President Recep Tayyip Erdogan of aligning with ISIS elements to further Turkey’s agenda in Syria.

“The common enemy today is the terrorist groups. I’m sorry to say, we don’t have the same definition of terrorism around the table,” Macron said Tuesday alongside Trump. “When I look at Turkey, they are fighting against those who fought with us shoulder-to-shoulder against ISIS, and sometimes they work with ISIS proxies.”

Erdogan, who met behind closed doors with Trump on Wednesday, did not speak publicly during the NATO meeting.

Also on Wednesday, Trump and Stoltenberg touted a defense spending increase of a combined $130 billion by the European allies and Canada since 2016. By the end of 2024, that figure is expected to rise to $400 billion, said Stoltenberg, who credited Trump with pushing members to spend more on defense.

“This is unprecedented. And it’s making NATO stronger,” Stoltenberg said.

Allies moved forward with other priorities, including implementing a plan that calls for nations to have 30 warships, 30 fighter-bomber squadrons and 30 land battalions available for combat in 30 days, Stoltenberg said.

In a first for the alliance, NATO also held formal talks among its leaders about China’s security implications.

Throughout its 70-year history, NATO has focused primarily on threats to the trans-Atlantic region and its immediate surroundings.

“China is the second largest defense spender in the world next to the United States and recently displayed new, modern capabilities, including nuclear weapons,” Stoltenberg said. “So we have to address the rise of China together and I look forward to the allies’ doing that at this leaders’ meeting for the first time.”

Putting China on NATO’s agenda has been a top military priority of the U.S., which is concerned about Beijing’s ambitions in the Arctic and about Chinese 5G technology, which American officials say presents a security risk.

At the luxury hotel in Hertfordshire, northwest of central London, the leaders discussed strategy, but didn’t disclose any precise steps they would take regarding China.

There also were disagreements within the alliance, most notably between the U.S. and France, on whether China should be viewed as an adversary at all.

At the conclusion of the leaders’ meeting, Stoltenberg said allies had agreed to “rely only on secure and resilient systems,” but didn’t specify if that would exclude Chinese technology.

Trump, meanwhile, said separately that some leaders he has spoken with have pledged not to use China’s 5G equipment.