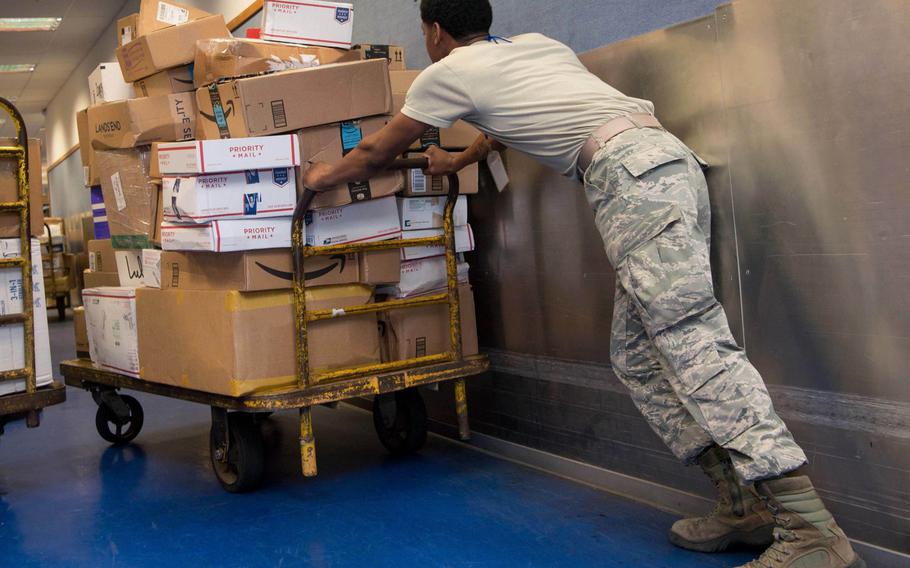 A U.S. Air Force airman pushes a cart of parcels at Ramstein Air Base, Germany's North Side Post Office in 2017. Space-available mail coming from the U.S. to Air Force postal offices in Germany, Belgium and the Netherlands will take around 30 to 45 days to arrive during the upcoming holiday season. (Elizabeth Baker/U.S. Air Force)

KAISERSLAUTERN, Germany — Mom will have to knit that sweater a little earlier if she wants to send it by space-available mail from the States to an Air Force post office in Europe in time for the end-of-year holidays.

Starting Nov. 16, space-available mail sent from the U.S. to Air Force-serviced post offices in Germany, Belgium and the Netherlands will once again cross the Atlantic by boat, taking between a month and 45 days to arrive, U.S. Air Forces in Europe Air Postal Squadron officials said Tuesday.

Space-available — or deferred — mail costs less to ship to APO/FPO addresses overseas than priority and express mail services. It is moved by ground across the U.S. and, until last spring, was put in containers and shipped by boat across the ocean.

But even though space-available mail wasn’t filling the shipping containers, the Air Force was still paying for a full container. So, since May, the USAFE Air Postal Squadron has been paying to transport space-available mail by commercial air from the U.S. to Europe along with more expensive priority and express mail, said Lt. Col. Derek Molloy, USAFE Air Postal Squadron commander.

“It ended up costing a little more, but not a whole lot more” to fly the mail over to Europe, Molloy said. As a result, “anything coming space available and priority was getting here around the same time.”

But that’s about to change, he said. With the added mail volume expected for the holidays, “We can fill the containers,” he said. That, and the fact that it “becomes prohibitively expensive” to use air transportation for all classes of mail during the holidays, mean the Air Force in Europe will go back to putting space-available mail on ships until the end of the holiday mailing season, around Jan. 15, Molloy said.

“If somebody tries to order tires in December, it’s going to take a long time,” Molloy said, but most items that service members and their families order online from the States for the holidays probably won’t be affected.

Items sent space-available via military mail from Europe to the States will continue to be shipped by air and then by ground once they arrive in the U.S., USAFE air postal squadron training manager Lionel Rivera said.

The Army flies all mail, no matter the class, and that is not expected to change during the holidays, said Ray Johnson, a spokesman for Army Installation Management Command-Europe.

John Vandiver contributed to this story.