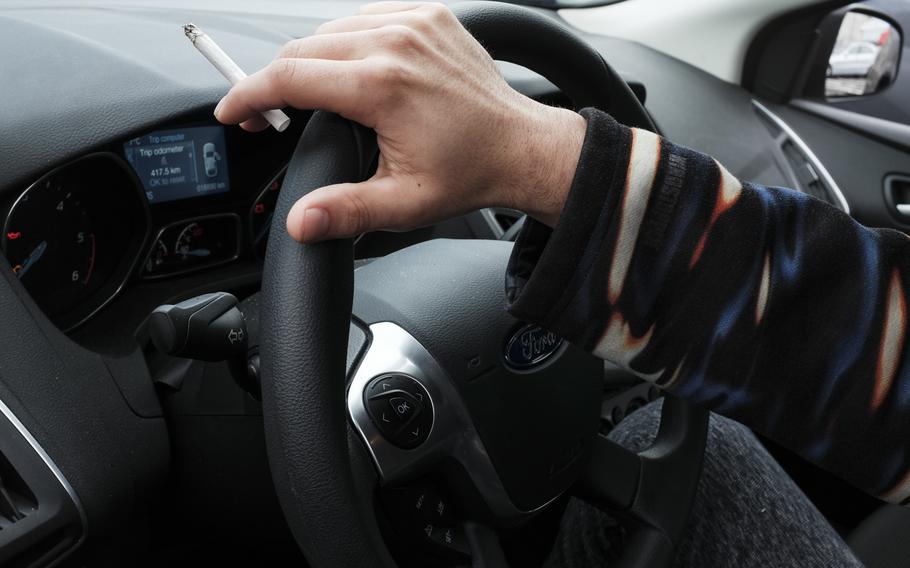 Buy Photo
Air Force officials have updated their tobacco policy, now prohibiting tobacco use in recreational facilities, as well as in privately owned vehicles where a child younger than 14 is present. (Photo illustration by Joshua L. DeMotts/Stars and Stripes)

KAISERSLAUTERN, Germany – The Air Force is once again tightening rules on tobacco use on its installations, further clarifying where airmen can — or rather, won’t be able to — get their nicotine fix.

The old Air Force Instruction on tobacco use, last revised in 2012, also prohibited tobacco use at all installation recreation facilities, but didn’t specify places such as basketball courts and running tracks. The old guidance also allowed smoking at recreation areas at designated smoking areas. No such general exception is written into the new policy.

Also now banned is smoking in privately owned vehicles when the vehicle is occupied by a child under 14 years of age.

One airman, taking a smoke break at RAF Mildenhall, England, on Thursday morning, said he was unaware that the regulation on smoking had changed. After hearing some of the new rules, he said they would not affect him, but he seemed disappointed that the Air Force was making it harder to smoke in outdoor locations.

He pointed out that people on a golf course are usually spread out, but he said he realizes that such rules exist usually because of a few incidents.

“I guess you always need these blanket rules,” said the airman, who asked not to be identified.

The new policy, published internally on March 15, also disallows tobacco use while in uniform by all students in technical training, accession and graduate medical education programs. It also prohibits special events in services’ facilities that promote tobacco use, such as “Cigar Night,” since such events run counter to “Comprehensive Airman Fitness” and “an Air Force culture of health,” Air Force officials said Wednesday in a news release announcing the changes.

A spokesman at Ramstein Air Base said Thursday that its services' facilities haven't allowed smoking for years.

The new regulation further clarifies the Air Force's tobacco-free military treatment facility campus policy. The Air Force in 2012 restricted smoking and all forms of tobacco use from hospitals and medical and dental clinics, to include adjoining parking lots and lawns, on its installations.

The Air Force emphasized in the news release that electronic cigarettes fall under the same restrictions as conventional cigarettes.

“We define e-cigarettes as a tobacco product. ..." Col. John Oh, the chief of health promotion for the Air Force Medical Support Agency, was quoted in the release as saying.

Acknowledging that the long-term safety of e-cigarettes is currently unknown, Oh said the Air Force will consider changes to its policy on the devices based on scientific evidence and in consultation with government subject matter experts.

The Air Force considers other products that can be configured to deliver nicotine as tobacco, such as water pipes, hookahs, vaporizers and smokeless products that are chewed, dipped, sniffed or "vaped."

The new regulation applies to all military and Air Force civilians while on Air Force installations.

The Air Force definition of tobacco does not include prescription or over-the-counter nicotine replacement therapy approved by the Federal Drug Administration.

Stars and Stripes reporter Adam Mathis contributed to this article.