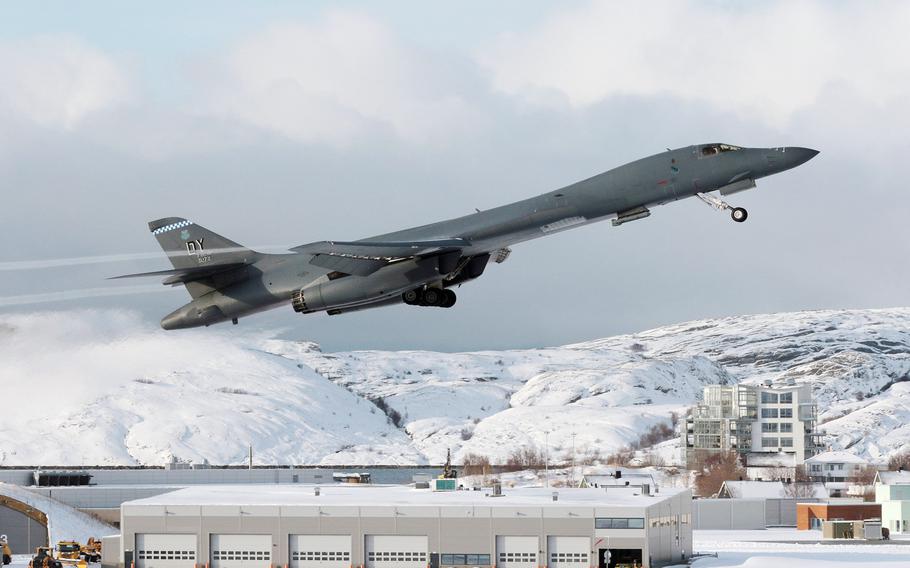 A U.S. Air Force B-1B Lancer takes off from Bodo Air Base, Norway. March 8, 2021 marked the first time a B-1 landed above the Arctic Circle. (Torbjorn Kjosvold/Norwegian armed forces)

The jet is one of four B-1s deployed to Norway along with 200 airmen from the warmer climes of Dyess Air Force Base in Texas.

The historic landing in the High North on Monday came during a busy day of flying in Norway and Sweden.

At Bodo, the B-1 conducted a “warm-pit refuel” on the snow-covered runway. The turnaround technique allows aircraft to land and refuel while the crew remains in the cockpit, letting the jet take off quickly.

A USAFE spokeswoman Tuesday confirmed a report on the Barents Observer news site that this was the first time a B-1 landed on a base in the Arctic Circle.

“It’s not every day that our bomber has the chance to play such a prominent role in training ally and partner JTACS,” said Gen. Jeff Harrigian, USAFE-AFAFRICA commander, in a statement. Such opportunities “in forward locations makes us the rapid, resilient and ready force we need to be,” he said.

Bodo is home to Norway’s fleet of F-16 fighter jets, which are NATO’s northernmost aircraft. The airmen there are trained to scramble their jets to meet Russian military planes flying from the Kola Peninsula, the Barents Observer reported.

The bombers and airmen deployed last month to Orland Air Base, located a few hundred miles southwest of Bodo.

The mission, for which U.S. bombers have deployed to Norway for the first time, comes as the U.S. military increases its training activities in the Arctic.