Buy Photo
The Strategic Airlift Capability program, a multinational mission, is comprised of 12 countries operating out of Papa Air Base, Hungary. (Brian Ferguson/Stars and Stripes)

Buy Photo
The Strategic Airlift Capability program, a multinational mission, is comprised of 12 countries operating out of Papa Air Base, Hungary. (Brian Ferguson/Stars and Stripes) Buy Photo
The Strategic Airlift Capability Hangar Complex is the home to the Heavy Airlift Wing at Papa Air Base, Hungary. (Brian Ferguson/Stars and Stripes) Buy Photo
A crew flies a C-17 Globemaster III during a cargo mission to Ramstein Air Base, Germany, March 23, 2017. The Strategic Airlift Capability program, a multinational mission, is comprised of 12 countries. (Brian Ferguson/Stars and Stripes) 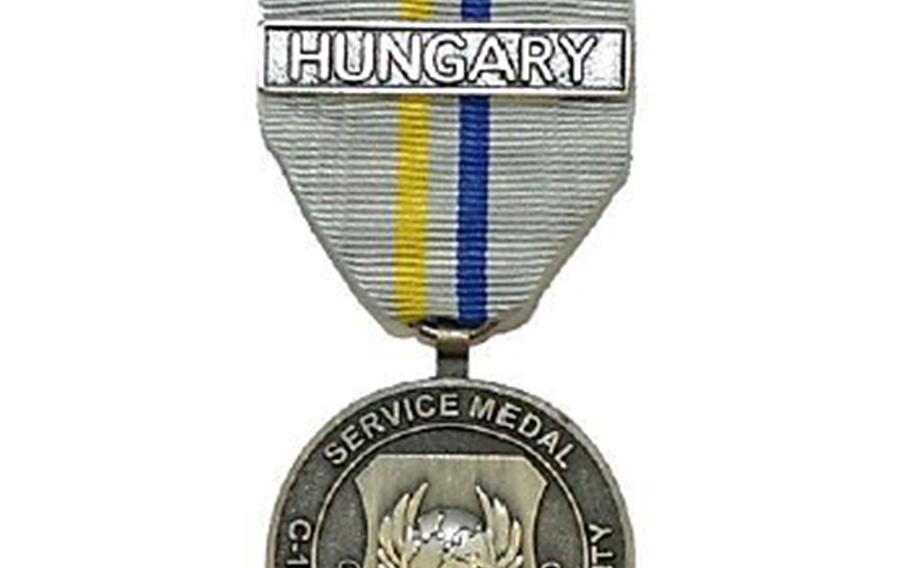 The new performance medal approved for airmen serving with a multinational wing in Hungary. (Courtesy photo)

KAISERSLAUTERN, Germany – The Air Force for the first time has approved an award for airmen serving with the heavy airlift wing at Papa Air Base in Hungary.

The Heavy Airlift Wing Service Medal will be based on exceptional performance or service and is retroactive to the fall of 2008, when the first team arrived ahead of the start of flying operations the following summer, said Capt. Christopher Bowyer-Meeder, a spokesman for U.S. Air Forces in Europe – Air Forces Africa.

The medal will allow commanders for the first time to acknowledge airmen for their contributions to the world’s first and only multinational C-17 Globemaster III wing.

“We wanted to be able to recognize the hard work and dedication” U.S. airmen serving at Papa “have shown to the mission and to our partner nations that we work with here,” said Col. James Sparrow, the vice commander of the Heavy Airlift Wing, in a statement.

“It is a huge win for the program for the U.S. Air Force to approve this decoration.”

But there’s a small catch: As a foreign award, the medal must be presented in Hungary and it may only be worn while there, officials said. It will not count toward promotion.

Sparrow is also vice commander of the Strategic Airlift Capability Program, a partnership that supports the airlift operations of 12 NATO and partner nations from Papa, a former communist airfield located in the countryside about 100 miles west of Budapest.

The participating countries pooled their resources to buy and share C-17 cargo planes over a 30-year period, providing them more options for transporting large numbers of troops and supplies to far-flung places, including Afghanistan.

The medal was first approved for use by all 12 nations in 2013. But to date, only Estonia, Finland, Hungary, Norway, Poland and Romania had awarded it to its airmen, officials said.

For U.S. airmen, medal recognition originally required the Defense Department, with concurrence from the State Department, to sign off on it, officials said. The medal was also formerly considered a service award, meaning airmen need only be assigned and serve honorably at the wing for a specific timeframe, Bowyer-Meeder said.

The medal is now a personal performance award, Bowyer-Meeder said.

USAFE personnel experts spent about a year updating the criteria and changing it to a foreign award, a classification that allows commanders at Papa to issue the medals, officials said.

Airmen who believe they distinguished themselves during a previous assignment at Papa can submit service records through the wing for consideration, Bowyer-Meeder said.