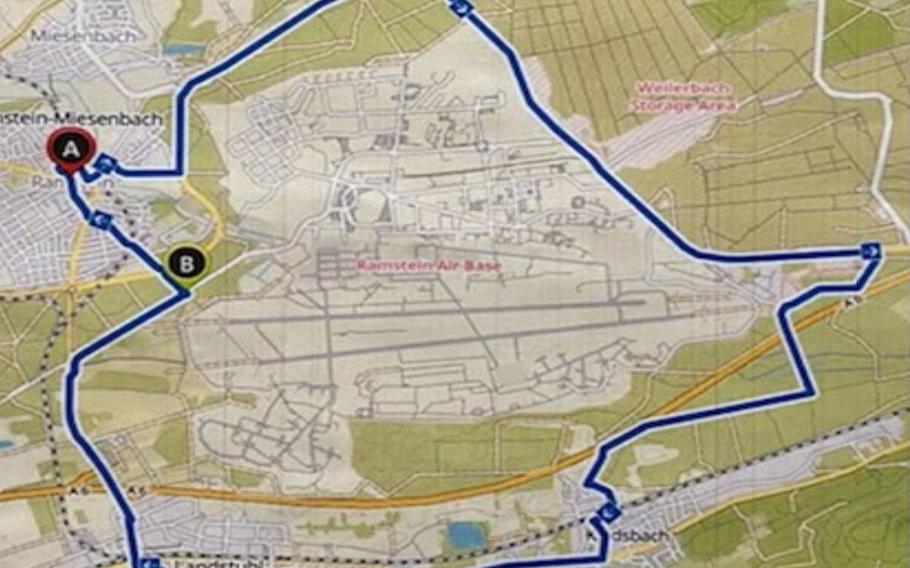 The route around Ramstein Air Base, Germany, that activists plan to take during a bicycle protest on April 30 and May 1, 2021, against the base's military operations. (86th Airlift Wing/U.S. Air Force)

The route around Ramstein Air Base, Germany, that activists plan to take during a bicycle protest on April 30 and May 1, 2021, against the base's military operations. (86th Airlift Wing/U.S. Air Force) 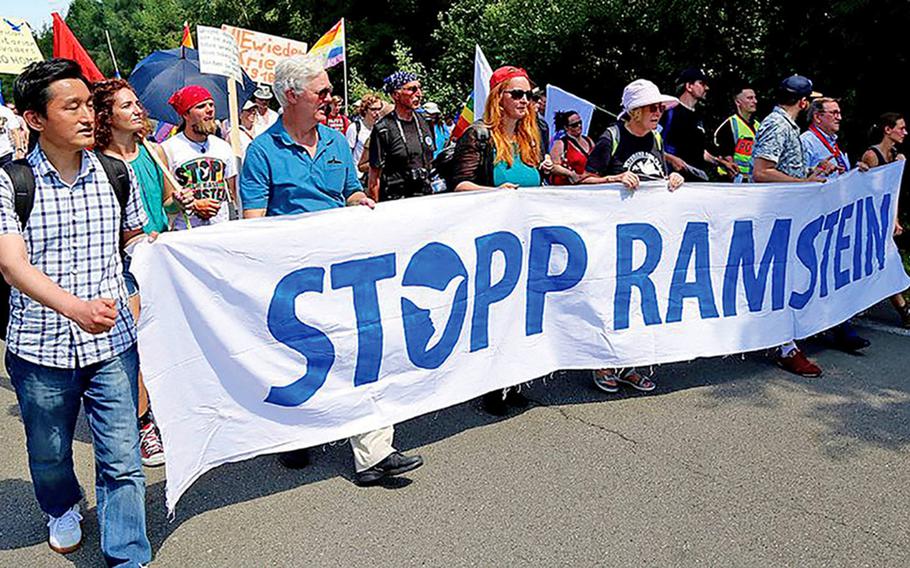 Protesters march outside Ramstein Air Base, Germany, in June 2018. Demonstrators will ride bicycles around the base on April 30 and May 1, 2021, to protest its use as a relay station for drone strikes, and call for it to be shut down. (STARS AND STRIPES)

KAISERSLAUTERN, Germany — Peace activists who allege that Ramstein Air Base unlawfully supports drone operations in the Middle East and elsewhere will protest by riding bicycles around the base Friday and Saturday.

German police and base officials say they don’t anticipate violence during the “Stop Ramstein Bike Marathon.”

But they have advised people to avoid bike paths near the base and told drivers to expect delays near the installation during the protest, in which some 40 cyclists are expected to take part from 2 p.m. to 8 p.m. on Friday and 9 a.m. to 4 p.m. on Saturday.

The Air Force respects “the rights of others to voice their opinion and practice freedom of speech and assembly,” an official with the 86th Airlift Wing said.

“Our primary aim here is to ensure a safe demonstration, both for those involved and for our Airmen, personnel and neighbors,” wing spokesman Lt. Col. Will Powell said in a statement.

The Berlin-based Action Office Campaign Stop Ramstein is organizing the protest against the largest U.S. military base in Germany. It has staged demonstrations outside the base at least five times since 2015.

The group says the base has violated international law by serving as a relay station for drone strikes in the Middle East, Afghanistan and Africa, and wants it shut down.

No drones “are directed, controlled or operated by any U.S. Air Force unit” on Ramstein, nor is data relayed through Ramstein for the operation of drones, Powell said.

The 693rd Intelligence Surveillance and Reconnaissance Group at Ramstein analyzes data obtained from drones flown in theater but does not control their mission orders or flights, Powell said.

All operations on and from the base adhere to international law and treaties, he said.

But a German high court said in 2019 there were “substantial indications” that U.S. drone missions assisted from Ramstein are, at least in part, “violating international law.”

The demonstrators plan to complete two loops around the base. A map of the route indicates they will ride through or near Ramstein-Miesenbach, Mackenbach, Kindsbach and Landstuhl, and past the base’s east and west gates.

German police will accompany the riders, who have to follow coronavirus protective measures, including maintaining distance from each other and wearing masks, said Andreas Wildberger, a detective with the Landstuhl police department.

A rally is planned at the end of the protest near the air show memorial outside the west gate on Saturday at 3 p.m.