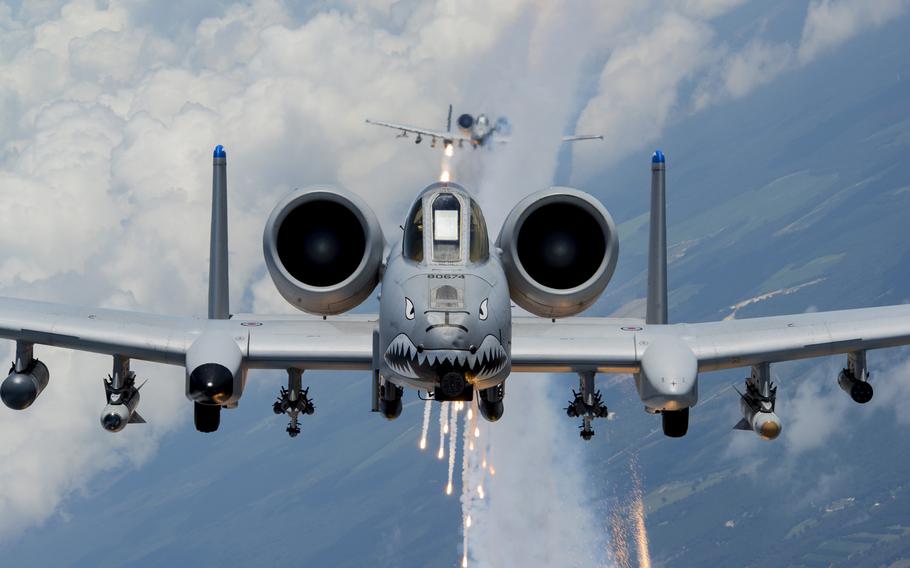 U.S. Air Force Capts. Andrew Glowa, lead, and William Piepenbring, both with the 74th Fighter Squadron out of Moody Air Force Base, Ga., fly A-10C Thunderbolt IIs over the skies of southern Georgia, in August 2014. Moody is deploying A-10s to Europe this fall as part of Operation Atlantic Resolve. (Jamal D. Sutter/U.S.Air Force)

Twelve U.S. Air Force A-10 Thunderbolt IIs are coming to Europe in an ongoing effort to reassure eastern allies.

The planes, from the 23rd Wing at Moody Air Force Base, Ga., will replace the same number of A-10s from Davis-Monthan Air Force Base, Ariz., whose six-month mission in eastern and central Europe ended in July. Three hundred airmen were involved in that mission.

Moody will deploy the A-10s this fall to various locations in the region as part of Operation Atlantic Resolve, the base said Tuesday in a statement.

Like those from Davis-Monthan, the planes and airmen from Moody will train with servicemembers from various NATO nations “to strengthen interoperability and to demonstrate U.S. commitment to the security and stability of Europe,” Moody officials said.

The U.S. launched Operation Atlantic Resolve in 2014 to bolster military readiness in response to Russia’s annexation of part of Ukraine and security concerns in the region.