A-10 Thunderbolt II crashes near Spangdahlem Air Base 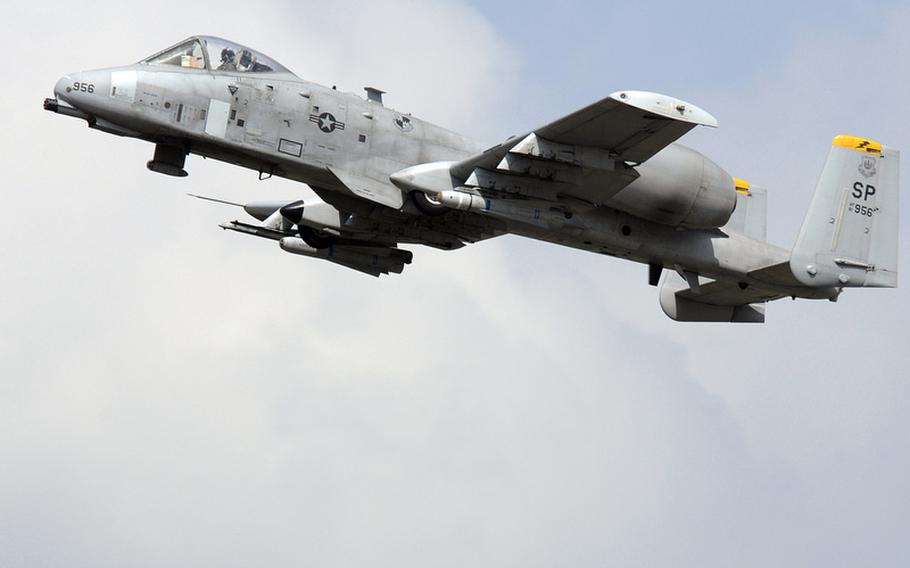 Buy Photo
A Spangdahlem, Germany-based A-10 "Warthog" takes off from the air base in 2010. (Michael Abrams/Stars and Stripes)

KAISERSLAUTERN, Germany &mdash; A U.S. Air Force A-10 Thunderbolt II aircraft crashed near Spangdahlem Air Base on Friday afternoon while on a routine training mission.

The pilot was injured and taken to a nearby hospital.

Air Force investigators and firefighters were on the scene, according to a 52nd Fighter Wing news release.

&ldquo;The jet crashed on a field roughly 250-300 meters away from the town,&rdquo; said Laufeld Mayor Karl-Josef Junk, who was standing outside his house when the plane crashed.

&ldquo;I saw the jet &mdash; what appeared to me [to make] a slight turn to the right, and then he crashed with his nose down into the ground,&rdquo; said the mayor. He added that he heard two bangs, speculating that the first bang was the ejection of the pilot, and then he saw a huge cloud of smoke.

According to Junk, the pilot complained about back injuries.

&ldquo;The firefighters were quickly at the scene and a helicopter transported the pilot to a hospital,&rdquo; he said.

Spangdahlem confirmed that the pilot was evacuated for medical treatment. An official announcement on the pilot&rsquo;s condition was not immediately available, but a nurse at a hospital in Trier said the airman was responsive. She declined further comment.

The identity of the pilot is being withheld pending notification of family members, Spangdahlem public affairs said.

The crash occurred shortly before 4 p.m. near Laufeld, which is north of the city of Wittlich. It has a population of about 520 inhabitants, Junk said.

The aircraft, also known as the Warthog, was part of the 81st Fighter Squadron at the Spangdahlem Air Base, in Rhineland Palatinate, said Senior Airman Nathanael Callon, a spokesman for the 52nd Fighter Wing at Spangdahlem. The twin-engine A-10 is used to provide close air support for ground forces by attacking tanks and other targets.