4 US airmen killed in Pave Hawk crash on England coast 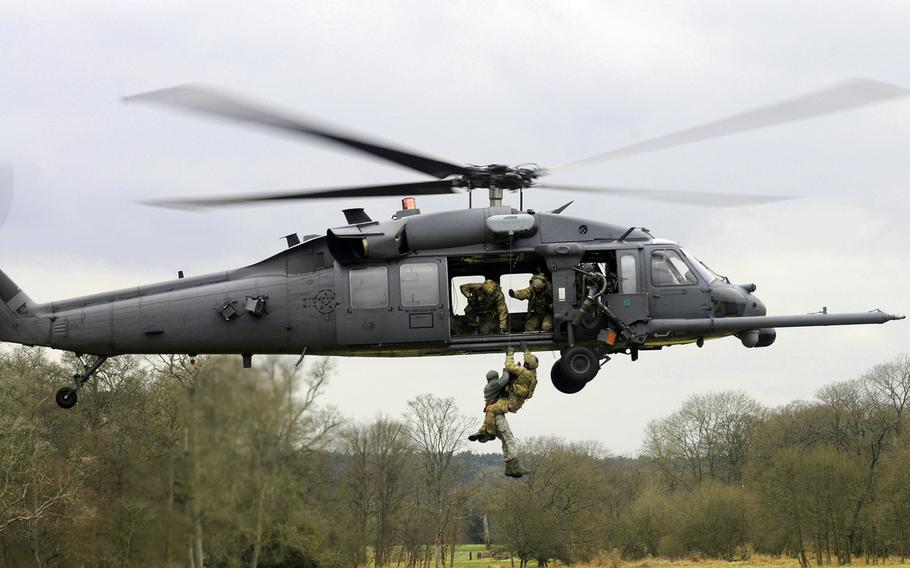 U.S. airmen are hoisted onto an HH-60G Pave Hawk during a training exercise in the Stanta Training Area, England, on March 20, 2013. (Dana Butler/U.S. Air Force)

U.S. airmen are hoisted onto an HH-60G Pave Hawk during a training exercise in the Stanta Training Area, England, on March 20, 2013. (Dana Butler/U.S. Air Force) A helicopter sits near the crash site of an HH-60G Pave Hawk near Salthouse, England, on Wednesday, Jan. 8, 2013. The crash on Tuesday evening killed four airmen from RAF Lakenheath, England. Norfolk police reported two helicopters were training when the crash happened, and the second landed to assist. (Adam L. Mathis/Stars and Stripes) 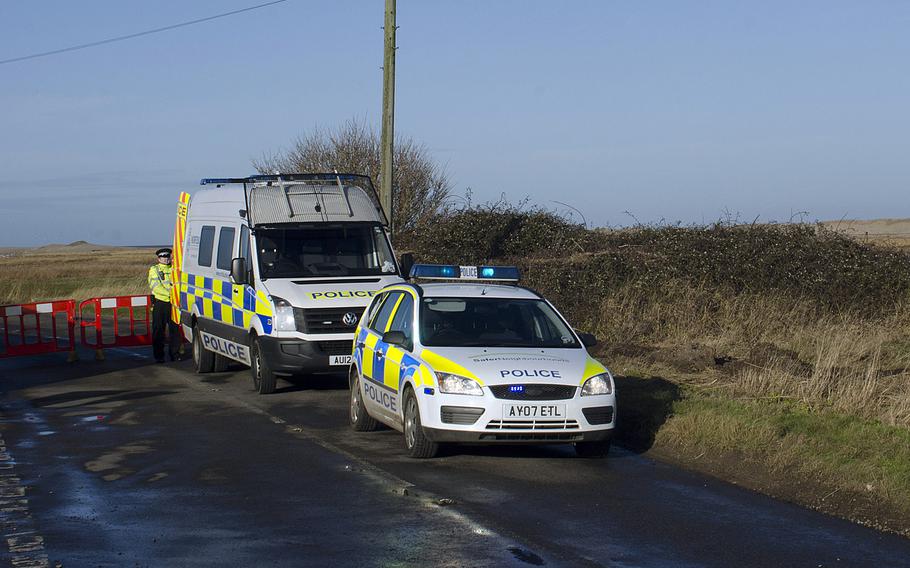 British police cordon off a road on Wednesday, Jan. 8, 2014, near the site of an HH-60G Pave Hawk helicopter crash near Salthouse, England. Four airmen from RAF Lakenheath, England, were killed in the crash on Tuesday. The crash occurred on a nature preserve, and police are restricting walking and bird watching in the area. (Adam L. Mathis/Stars and Stripes)

The aircraft — a U.S. Air Force HH-60G Pave Hawk helicopter — was assigned to the 48th Fighter Wing out of RAF Lakenheath. The crash occurred at 6 p.m. near the east England town of Salthouse, according to the release from the wing.

Authorities have since secured the crash site and established a cordon around the area. Aboard the Pave Hawk were 1,200 rounds of 50-caliber ammunition, which is standard for the aircraft, according to the 48th Fighter Wing.

The investigation and cleanup at the crash site could take days, according to Norfolk Police Superintendent Bob Scully. He said the investigation is complicated by the site being on a salt marsh and covering an area about the size of a soccer field.

The crash debris has not been moved, except for some that had to be saved from the tide, and even the bodies of the four airmen may remain on site overnight in order to preserve the integrity of the scene.

“So the most important element, apart from showing good respect for the deceased, is to make sure that the investigation is as thorough and as careful as it can be,” Scully said.

According to the Norfolk Constabulary, two helicopters were involved in the training mission Tuesday, and following the crash, the second aircraft landed nearby to assist.

Ammunition from the downed aircraft is scattered across the area, which is home to a nature reserve, local authorities said.

Details about what caused the helicopter to crash are yet to emerge.

“You just get used to them being around,” Macdonald said. “You don’t tend to listen to them.”

In the past year there have been multiple crashes involving Pave Hawk and similar helicopters operating in Japan, Afghanistan and in the Red Sea region.

In August, an Okinawa-based airman was killed when his Pave Hawk crashed during a training mission at Camp Hansen. In December, a U.S. Navy Knighthawk helicopter crash-landed south of Yokosuka Naval Base, injuring some of the crewmembers. That crash came on the heels of a fatal September Knighthawk accident in the Red Sea, which left two sailors dead.

In December, six U.S. servicemembers were killed when their Black Hawk UH-60 crashed in southern Afghanistan.

The HH-60G Pave Hawk, a relative of the Army’s Black Hawk helicopter, is commonly used on military search-and-rescue missions around the world.

Members of the 56th Rescue Squadron recently returned from a deployment to Afghanistan, where they conducted medical evacuations.