Panel seeks to allow re-exports of Swiss weaponry to Ukraine 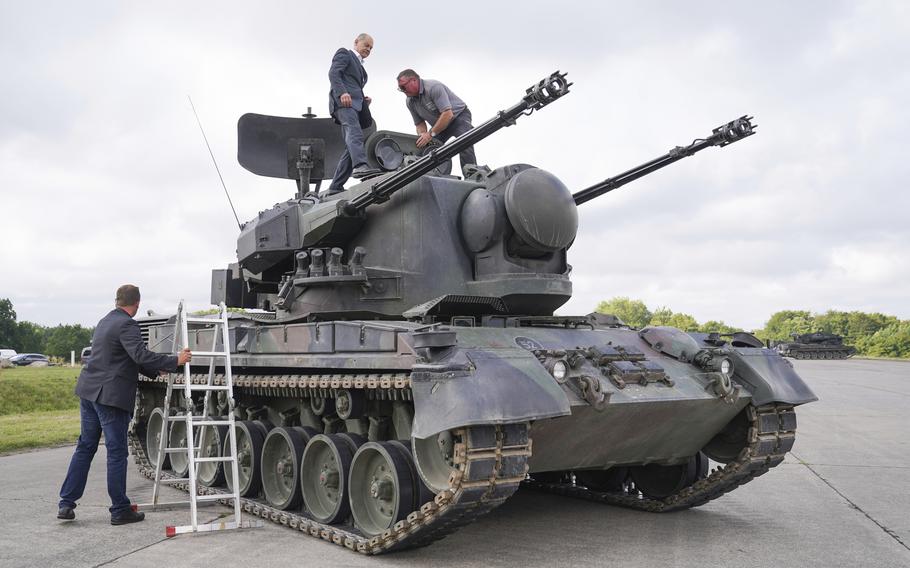 German Chancellor Olaf Scholz, top left, stands on top of a German Gepard anti-aircraft gun tank as he visits a training program for Ukrainian soldiers at a military training area in Putlos, Germany, Aug. 25, 2022. A parliamentary committee has on Wednesday, Jan. 25, 2023 recommended a waiver of Swiss law that bars countries from re-exporting Swiss tanks, weaponry and other war materiel to Ukraine for its defense against Russia. Swiss war materiel that other countries could re-export to Ukraine under a proposal from a parliamentary committee might include ammunition for German-made Gepard anti-aircraft tank. (Marcus Brandt/dpa via AP)

GENEVA — A parliamentary panel in Switzerland has recommended waiving a law that bars countries from re-exporting Swiss armored vehicles, weapons and other war materiel to Ukraine for its defense against Russia, insisting the move would not violate the country's much-vaunted neutrality.

The Security Policy Committee of the lower house of Switzerland's parliament voted 14-11 Tuesday to allow an re-export exception for cases involving a use of force that violates international law — notably, Russia's invasion of Ukraine 11 months ago.

Adherence to the concept of neutrality is enshrined in the Swiss constitution. The National Council committee's vote amounts to only a small first step, and it remains far from certain whether the government would authorize such a waiver.

"The majority of the committee believes Switzerland must offer its contribution to European security, which requires more substantial aid to Ukraine," the committee said in a statement. It insisted the proposed changes "respect the law of neutrality" because they would not involve direct exports of Swiss war materiel to conflict zones.

Any move by Switzerland to allow such re-exportations would unlikely be a game-changer for Ukraine's fight against Russian forces. But the proposed easing of the Swiss restrictions comes as pressure has mounted on friends of Ukraine — like the United States and Germany — to do more to help Kyiv, which has been clamoring for more Western tanks, anti-aircraft systems and other firepower for its defense against Russia.

Germany and the United States on Wednesday announced plans to ship dozens of main battle tanks to Ukraine.

Ever since the war began last February, Switzerland has faced an often-divisive debate about just how far the country would and could go in taking a stand on the Ukraine conflict. So far, its biggest decisions have involved lining up behind the European Union — the 27-member-state bloc that Switzerland has not joined — on economic sanctions, which itself has riven the Swiss body politic.

Authorizations for the re-export of Swiss weaponry to Ukraine, let alone direct shipments from Switzerland, have been off the table. A final decision could rest with the Swiss Secretariat for Economic Affairs, known as SECO, or with the Federal Council, the seven-member governing body that includes Swiss President Alain Berset.

SECO previously received requests from Germany to allow it to pass on 35 mm ammunition for the Gepard anti-aircraft tank, as well as 12.7 mm ammunition for an unspecified purpose. Denmark sought the right to ship Piranha III wheeled armored vehicles to Ukraine.

The economic affairs secretariat said the requests were denied under a law that bars exports to any country involved in an internal or international armed conflict.

Last week, Spain requested authorization to transfer to Ukraine two 35 mm anti-aircraft guns imported from Switzerland. Switzerland was unlikely to agree to the request, SECO said. It has cited Switzerland's commitments under the Fifth Hague Convention of 1907, summarizing that agreement as saying "the principle of equal treatment must be observed when exporting arms."

As with counterparts in many other countries, SECO generally has the power to decide whether or not to allow such re-exportations or not. In complex and significant situations like the Ukraine war, it can seek input and decision-making from the Federal Council.

Under the committee's proposal, authorization for re-exportation could be possible if the U.N. Security Council or a two-thirds majority of the U.N. General Assembly declares any use of force to violate international law, the committee said.

The Security Council — which counts Russia as a veto-wielding permanent member — is unlikely to do so. But the assembly in November overwhelmingly passed a measure calling for Russia to be held accountable for violating international law over the conflict in Ukraine.