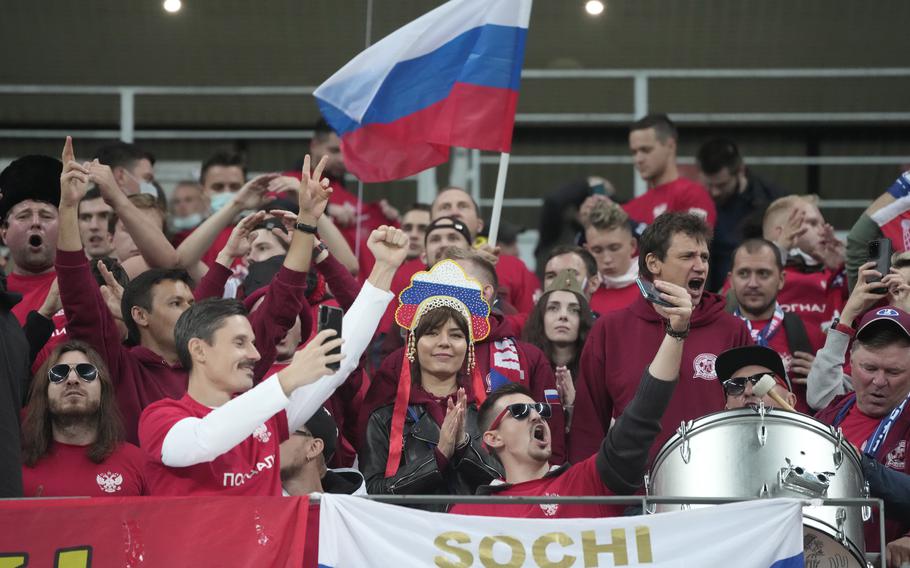 Soccer fans wait before the start of the World Cup 2022 group H qualifying soccer match between Russia and Croatia at the Luzhniki Stadium in Moscow, Russia, on Sept. 1, 2021. Russia is trying to make progress on its slow and difficult return to international sports at a meeting with UEFA officials. (Pavel Golovkin/AP)

NYON, Switzerland — Russia tried to make progress Tuesday on its slow and difficult return to international sports amid its war in Ukraine at a meeting Tuesday with officials at European soccer body UEFA.

Russian Football Union vice president Aleksandr Alaev declined to comment when leaving after three hours of face-to-face talks. They were the first since Russia drew back from a threat last month to leave UEFA and seek to join the Asian Football Confederation.

A follow-up meeting will be held in February, the Russian news service TASS said.

Russian teams are banned from UEFA and FIFA competitions during the war in Ukraine and there currently is no way back from those decisions that were upheld at sport's highest court.

National teams including Poland, Switzerland and Albania had refused within days of Russia's invasion of Ukraine last February to play their scheduled games against Russia.

When the UEFA and FIFA bans imposed on Feb. 28 were challenged at the Court of Arbitration for Sport, judges agreed that the consequences of letting Russian teams play "would be irreparable and chaotic" for the smooth running of competitions.

Russian teams were removed from trying to qualify for the men's and women's World Cups, the women's 2022 European Championship which it had qualified for, plus European youth and club competitions.

While soccer is blocked, Olympic and sports officials worldwide had conference calls last week to explore ways — all of them complicated — to help Russian athletes and teams compete soon in qualifying events for the 2024 Paris Olympics.

The International Olympic Committee has an executive board meeting Wednesday, which is expected to discuss its position on Russia 18 months ahead of the Paris opening ceremony. The IOC advised sports bodies last Feb. 28 to exclude Russia from hosting and competing.

UEFA declined to comment Tuesday on meeting RFU officials Alaev and Maxim Mitrofanov, the general secretary who is a former CEO at Zenit.

On Wednesday in Nyon, UEFA has a meeting of its executive committee which includes RFU president Alexander Dyukov and the president of Ukraine's soccer federation, Andriy Pavelko. It was unclear if both will attend in person.

UEFA confirmed last year that Russia would not play in Euro 2024 qualifying which starts in March, though it has yet to remove another showpiece game from the country. Kazan is still listed to host the Super Cup game in August between the winners of the Champions League and Europa League.