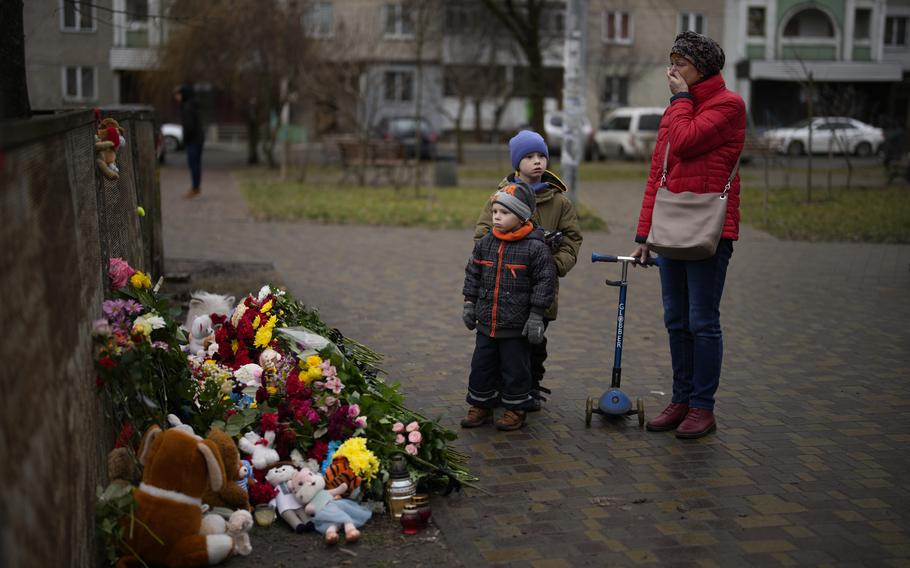 People pay their respects at a makeshift memorial at the scene where a helicopter crashed into civil infrastructure on Wednesday, Jan. 18, in Brovary, on the outskirts of Kyiv, Ukraine, Friday, Jan. 20, 2023. (Daniel Cole/AP)

BROVARY, Ukraine — A small broom and dustpan in hand, Olga Prenzilevich cleans up the debris along the road in a sleepy Kyiv suburb next to a cordoned-off mound of charred vehicles and misshapen wreckage.

But she can't sweep away the terrible memory of seeing the government helicopter that carried Ukraine's interior minister tumbling through the fog and crashing into the kindergarten building. Or the frantic dash afterward to save the children, their tiny bodies in flames.

"I am still in shock," the 62-year-old custodian says, the acrid stench of burning still in the air.

Nearby, Oksana Yuriy, 33, watches investigators photograph the scene to try to piece together how Wednesday's crash happened.

"I thought this was a safe place," she said. "Now I understand there is no such thing."

This is the hard lesson Ukrainians have had to learn in a week of mourning at least 59 dead in places that many considered safe from the violence of the war against Russia, now in its 11th month.

Since February, they have seen lives lost from missile strikes and battlefield combat, and civilians dying in schools, theaters, hospitals and apartment buildings. They have suffered irretrievable losses: a loved one, a place to call home, and for some, any hope for the future.

But this past week seemed to have a special cruelty to it.

It started on the weekend, when a barrage of Russian missiles slammed into an apartment complex that housed about 1,700 people in the southeastern city of Dnipro. The Jan. 14 barrage killed 45 civilians, including six children — the deadliest strike on civilians since spring — in an area once considered safe for many who fled front-line areas farther east.

Then came Wednesday's helicopter crash at the kindergarten in the Kyiv suburb of Brovary that killed 14, including Interior Minister Denys Monastyrskyi, other members of his ministry and the aircraft's crew. One child on the ground was killed and 25 people were injured, including 11 children.

Monastyrskyi, 42, had been traveling to the front line when the Super Puma helicopter went down in the fog, although no official cause has been determined.

Flowers piled up Friday at the fence outside the kindergarten. A 73-year-old woman hung a plastic bag full of aloe vera plants after reading that they might help heal burn victims. 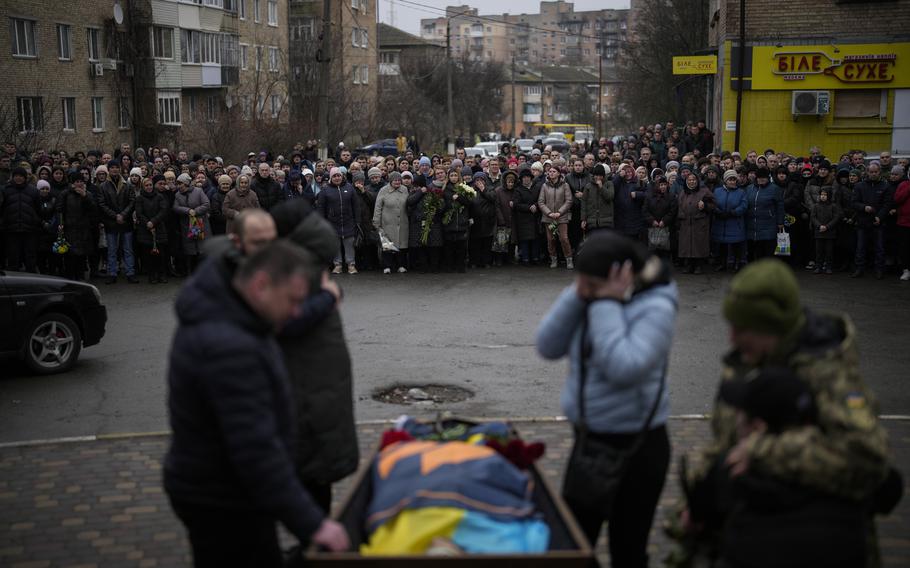 Bucha relatives gather to mourn the body of Oleksiy Zavadskyi, a Ukrainian serviceman who died in combat on Jan. 15 in Bakhmut, during his funeral in Bucha, Ukraine, Thursday, Jan. 19, 2023. (Daniel Cole/AP)

But not all the mourning was in Brovary or Dnipro.

At a cemetery in the town of Bucha, near the capital, Oleksy Zavadskyi was laid to rest after falling in battle in Bakhmut, where fighting has been intense for months. His fiancee, Anya Korostenstka, tossed dirt on his casket after it was lowered into the grave. Then she collapsed in tears.

"The courage of our military and the motivations of the Ukrainian people is not enough," President Volodymyr Zelenskyy said in a news conference Thursday at the Mariinskyi Palace in Kyiv.

He had appeared a day earlier in a video link to the World Economic Forum in Davos, Switzerland, where he asked his high-powered audience to stand silently to honor those killed in the helicopter crash. His wife, Olena Zelenska, who had traveled to the conference to muster support for Ukraine in person, dabbed tears from her eyes as she learned of the crash.

At an event Thursday at Kyiv's lavish Fairmont Hotel, U.S. Ambassador Bridget Brink told attendees that some of the embassy's staff had died in fighting on the front.

"I know a lot of Ukrainians inside and outside the government are hurting right now," she said, urging her audience of diplomats, businessmen and journalists to not lose faith.

"If you're looking at it day to day, it's almost too hard," she added. "In the bigger sweep of things, it's a different story."

Inside a hospital ward in Dnipro, where she was recovering from last weekend's missile attack, Olha Botvinova, 40, celebrated with birthday balloons and cards. It wasn't her actual birthday, she said, but she believes she was born a second time by merely surviving.

"We plan to keep living," she said.

She had fled war-ravaged Donetsk in 2014 when Moscow-backed separatists seized the city. In the spring of 2022, they had to flee again, this time from the city of Kherson after it fell to the Russians.

She thought she would be safe in Dnipro.

The missile attack blew out kitchen and bedroom walls of dozens of apartments. Inside, life as it was moments before the blast is preserved: In an eighth floor kitchen with bright yellow walls, a bowl of apples was untouched.

Many residents are still without windows. Oleksii Kornieiev returned from the eastern front to help his wife clean up.

"Our family's mood is low," he said, saying they must cope with power outages amid frigid temperatures. "But we're glad to be alive."

Clothes, pillows, blankets and mattresses were being handed out at distribution points in the city.

"Yesterday they had everything, and today they have nothing," volunteer Uliana Borzova said of the residents.

"I am trying to hold on," she added. "Because otherwise, we will all just drown in sorrow." 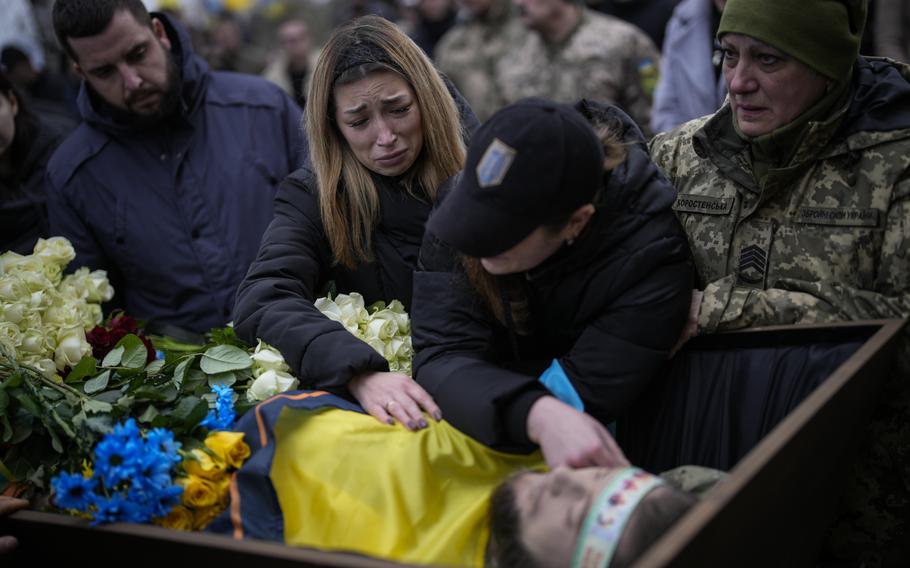 Widow Anastasia Ohrimenko, left, mourns with Anya Korostenska over the body of her fiance Oleksiy Zavadskyi, a Ukrainian serviceman who died in combat on Jan. 15 in Bakhmut, during his funeral in Bucha, Ukraine, Thursday, Jan. 19, 2023. (Daniel Cole/AP)