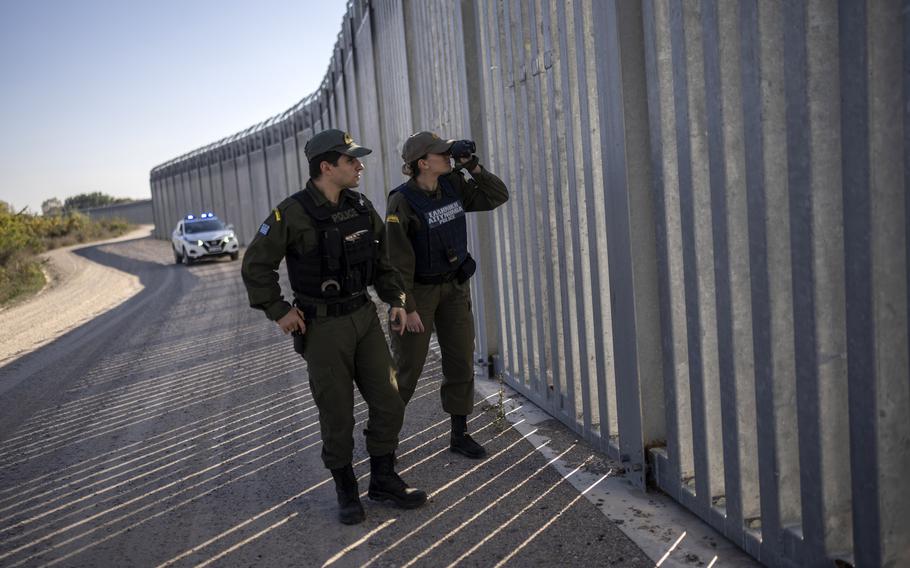 Police border guards patrol along a border wall near the town of Feres, along the Evros River which forms the frontier between Greece and Turkey on Sunday, Oct. 30, 2022. Greece prevented some 260,000 migrants from entering illegally in 2022 and arrested 1,500 traffickers, Greece’s minister in charge of the security told ambassadors from other European Union countries plus Switzerland and the United Kingdom Saturday, Jan. 21, 2023, as he guided them to a still expanding border wall in the country’s northeast. (Petros Giannakouris/AP)

Citizens' Protection Minister Takis Theodorikakos was speaking to ambassadors from other European Union countries plus Switzerland and the United Kingdom as he guided them to a still expanding border wall in the country's northeast.

Theodorikakos emphasized to the 28 envoys that Greece's border is also the EU's external border.

"The task (of protecting the border) needs the support ... of European public opinion, the European Union itself and its constituent members individually," Theodorikakos said. "It is our steadfast position that member states of first reception cannot be (the migrants') only European destinations.

"There must be solidarity among member-states and a fair sharing of duties...close coordination is a must," he said.

The Greek minister's sentiments were echoed by Cypriot Ambassador Kyriakos Kenevezos, who spoke of the "need for understanding" from countries that don't have external EU borders.

U.K. Ambassador Matthew Lodge said that "our priority is to protect the human life and dignity endangered by the criminal trafficking networks ... even though we are no longer an EU member, we are closely cooperating,"

Greece's five-meter (16-foot) steel wall facing neighboring Turkey to the east across the Evros River — called Meric in Turkey — currently extends more than 27 kilometers (17 miles) and, according to Greek authorities, helps cover another 10 kilometers (six miles). Greece is currently expanding the wall, adding a 35-kilometer (22-mile) stretch with the ultimate goal of extending it to cover most of the 192-kilometer (120-mile) border.

Greece has repeatedly accused Turkey of weaponizing the plight of migrants by encouraging them to cross the border to discomfit Greece and the rest of the EU — effectively cooperating with traffickers. Turkey accuses Greece of violent pushbacks that endanger the lives of migrants.

Turkey, whom the Cypriot ambassador called "the elephant in the room" in Saturday's meeting, also has its own migrants' problem — hosting about 5 million of them. EU leaders are worried that Turkish President Recep Tayyip Erdogan could encourage a mass exodus to the EU, where most of the migrants and refugees want to end up, preferably at one of the more prosperous bloc members.

The EU's border protection agency, Frontex, will add another 400 border guards in Greece — 250 of them in February — to the existing 1,800-member force, Theodorikakos said.

Demetris Nellas contributed to this report from Athens.